More Airfix Spitfires being built - or at least painted, while mostly still on the sprues. A couple of Mk 1s, in 72nd and 48th....see for yourself how neat these new tool Airfix kits are. 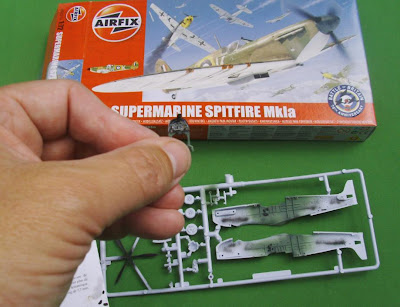 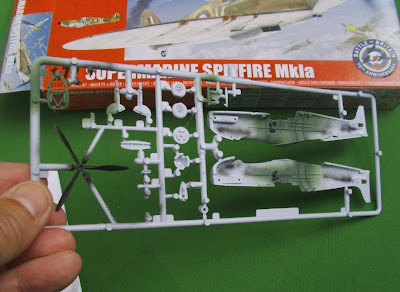 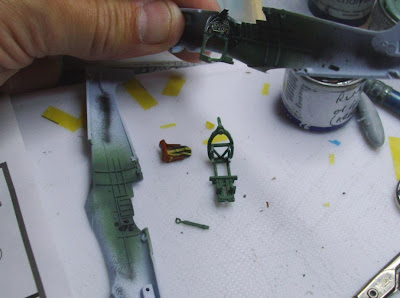 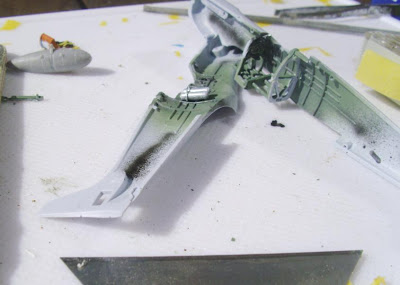 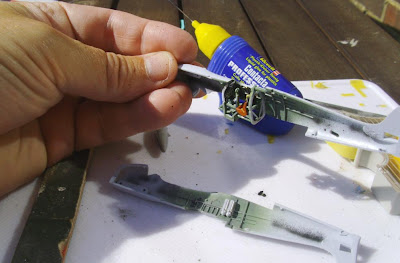 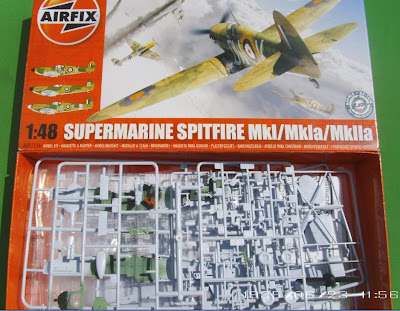 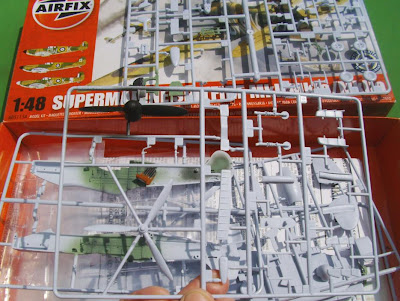 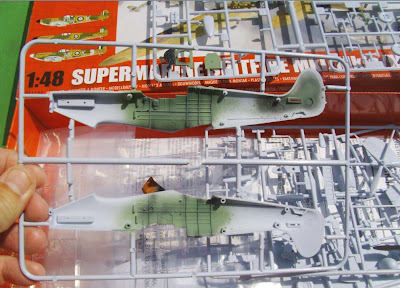 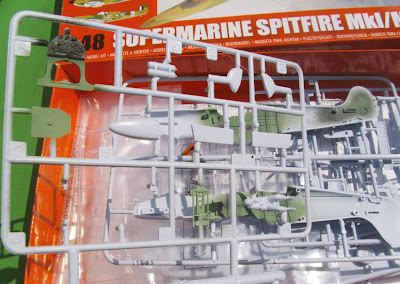 Posted by FalkeEins at 06:31 No comments: 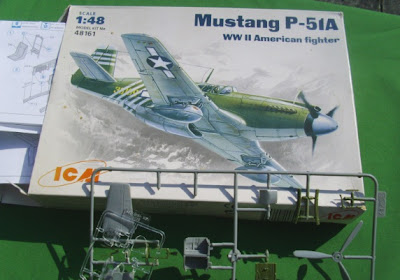 The North American A-36 Apache and early model P-51 Mustangs had a slightly different profile from the more familiar P-51D, which hasn't been terribly well captured in existing kits. While most agree that their 'D' is a pretty good representation probably based on the Tamiya 'D', the ICM Allison-engined Mustang has a certain number of shortcomings. Basically it is a mish-mash of a kit. It is boxed as a P-51A, but has the narrow air intake above the nose of a Mk.I or Mk.IA/P-51. The wings have the aerodynamic fairings ahead of the ailerons typical of the P-51B/C - although it should be perfectly possible to do something here with a sanding stick. More importantly and probably impossible to correct is the fuselage profile, Allison-engine P-51s having a shallower profile than the Merlin-engined variants - some 3 ins from canopy top to fuselage bottom on the real thing according to Mustang researchers and specialists on the web.

Nor does the kit feature locating lugs, holes and pins, and it looks like the fit will be rather 'hit n miss' as the fuselage parts are warped. I've seen this kit described as a " sort of a hybrid between the AM mouldings and Tamiya mouldings, quite odd in fact ".  Perhaps because of the hybrid nature of the kit, you get lots of spares box bits eg. it comes with  props and so on for a P-51B/C, two clear instrument panels, different types of exhausts and other details not used in the P-51 A.

(Below;  A-36 at Duxford - a good view of the slotted retracted airbrake in the wing upper surface and the flattened elongated air scoops, both upper and lower) 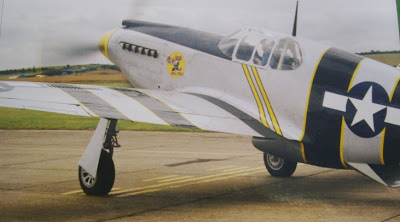 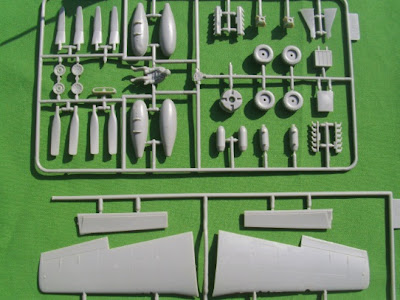 Posted by FalkeEins at 01:03 No comments:

Not much to report here. After our trips to Greece and Belgium and a chance to see the USAF Thunderbirds in action little if anything has happened on the bench for a while now. Another Revell Fw 190 (1/72) nears the painting stage, this one hopefully finished as Oblt. Bretschneider's 'Red 1' complete with faired-over cowl MG troughs and armoured Panzerplatte from card.. 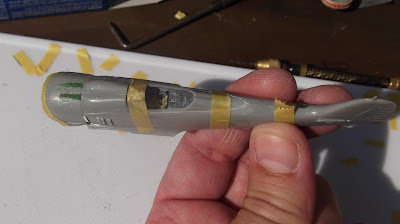 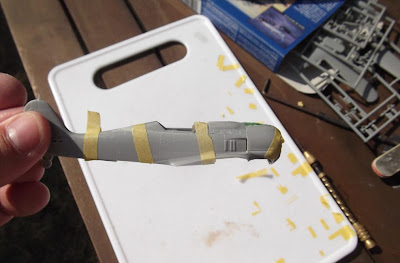 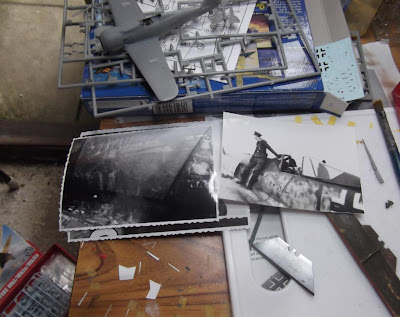 Having recently picked up two of the new Karaya 'Captured Butcher birds' sheets no doubt this Fw 190 will be followed by several more...in fact a red, yellow and blue example to go with the white one already completed will make for a nice if rather gaudy display!  Elsewhere Mike Grant has just built the yellow captured 354th FG machine 'Cobras prize' in the current issue of SAMI... 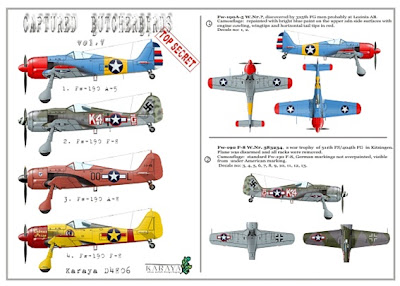 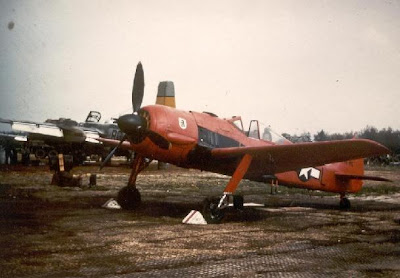 Above 404th FG captured machine from 5./JG 4 and below Fw190G-3, W.Nr.160057 (CE.No.2900). This example was one of two captured at Gerbini in Sicily by the 85th FS of the 79th FG in September 1943. It was shipped to the US in January 1944 where repairs were made and it was flown to NAS Patuxent River in February. Model is the old Airfix A-8 with replacement white metal cowl cover and vacform canopy. 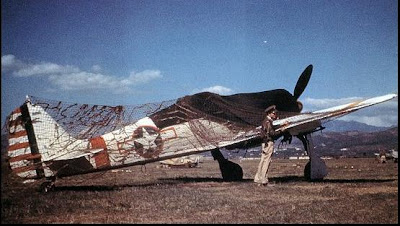 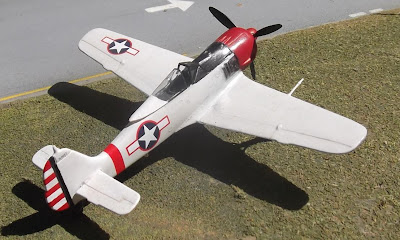 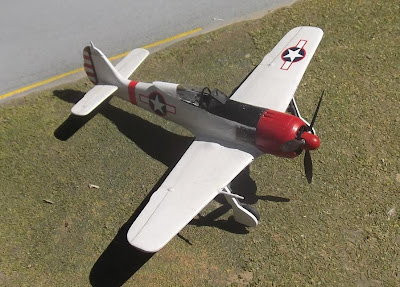 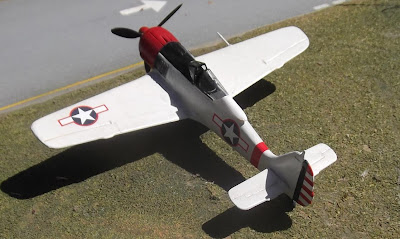 Elsewhere the stash continues to grow - most notably of Eduard 1/48 scale Doras. 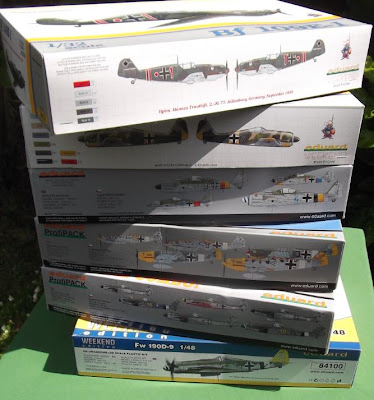 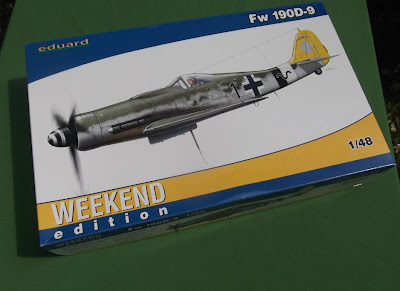 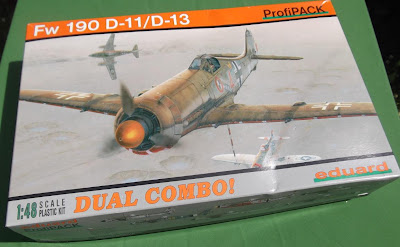