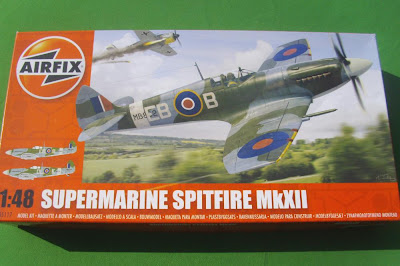 From France's leading WWII ace to France's second WWII ace Jean Demozay...well not quite, but I fully intend to complete the new Airfix Spit XII in the kit scheme, 91 Squadron during 1943. Demozay was CO of 91 Squadron through 1942 - the first French pilot to command an RAF squadron, as opposed to a Free French one - but he might just have left the unit by the time the Spitfire XII arrived. The Spitfire XII was the first Griffon engined variant to see operational service with the RAF. Only around 100 were built and only three squadrons used it, including and probably most famously, 91 (Nigeria) Squadron who were based in Hawkinge, just a stone's throw up the road from here. 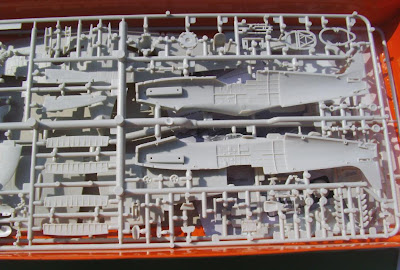 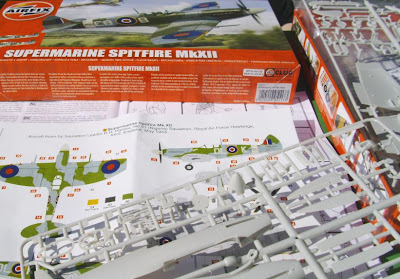 Spent the afternoon in the garden in the sunshine and made a start on the cockpit. The kit comes with plenty of interior detail moulded into the fuselage halves. I've used .015" plastic sheet to overlay and 'beef up' the moulded detail, scratched a throttle quadrant, cut out the door and added the canopy rail so that I can use the neat 'open-canopy' option.

A relatively straight forward enhancement is to drill out the lightening holes of the internal structure. Note how thin the plastic is in the cockpit area (the sun shining through it in the pics below!). This is Tamigawa quality. 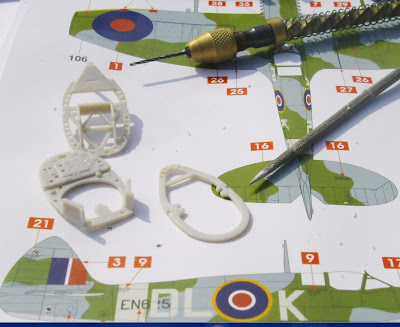 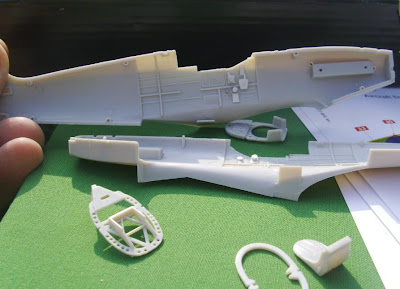 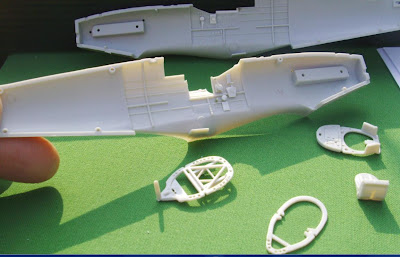 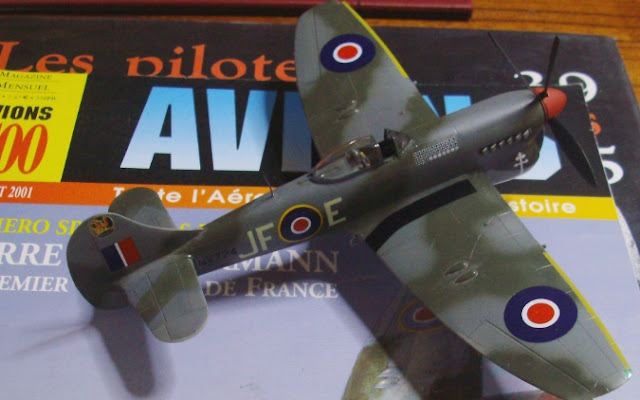 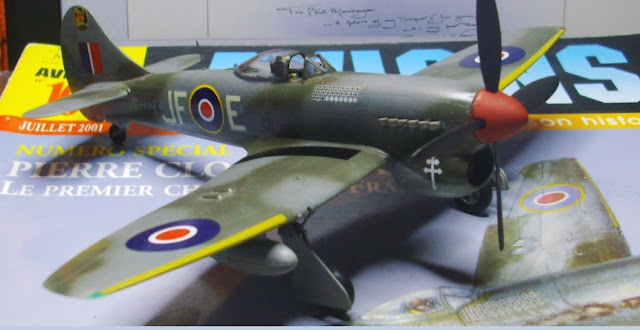 Academy Tempest finished in the markings of Clostermann's NV 724, the last of his JF*E Tempests - just the yellow prop tips and a matt varnish coat to add. Note the scoreboard ahead of the cockpit, 23 confirmed and nine probables. Perhaps best known today as the author of one of the finest of all WWII flying memoirs with over 3 million copies sold, "Le Grand Cirque - The Big Show", Pierre Clostermann's record has in recent years been the subject of some considerable controversy and re-evaluation. The doyen of French aviation historians Christian-Jacques Ehrengardt wrote in his 1999 history of French fighter pilots; " the official archives are there to prove it, only 12 victories of Clostermann's can be identified with certainty....in Clostermann's case 'probable victories' would tend to mean 'improbable..'

I believe I am correct in writing that in the subsequent court case (Clostermann sued during the year 2000!) the offending book (see image below) was pulped and substantial damages awarded. Indeed Clostermann spent the latter years of his life seeking to redress and re-establish the 'official' record, even writing in to Scale Aircraft Modelling as early as 1982 to rebutt accusations that he had overclaimed his number of actual aerial victories and that he was now wearing a medal (the D.S.O.) to which he was not entitled. Clostermann responded thusly:

" ..As to my claims, they never changed. They were painted on my Tempest, (see accompanying photo), (The photograph that Pierre sent with his letter, with him in the cockpit of 'Le Grand CharIes'~, NV724, JF.E of 3 Sqn., circa July 1945, showing the twenty-three black crosses representing his accredited confirmed 'kills', and the nine white outline only crosses for 'probables' and 'ground kills') and are substantiated by the following citations and letters. My two DFC citations, by Air Marshal Slessor and AOC 83 Group Sir Harry Broadhurst, are enough for me - "DFC 26/8/44 This officer has displayed outstanding courage and devotion to duty throughout his operational career in the course of which he has destroyed at least 11 enemy aircraft and damaged other military objectives". "Bar 28/5/45 since being awarded the DFC this officer has participated in 70 new operational missions during which he has destroyed a further 12 enemy aircraft. Throughout, Lieutenant Clostermann has displayed outstanding courage and ability, and has proved to be a source of inspiration to all". 23 black crosses and 23 confirmed by my DFC citations. I never personally asked for anything else.... " 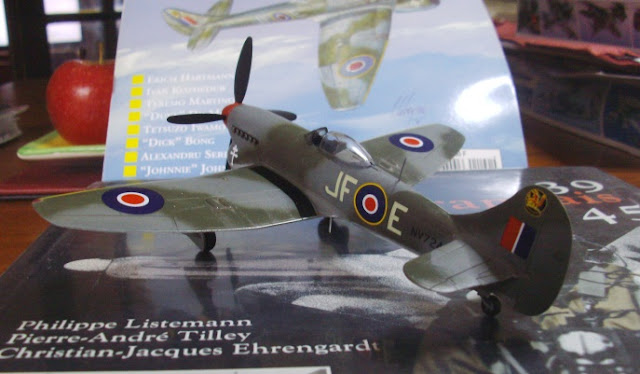 Aside from the fact that the aircraft referred to is SN 222 and NOT his last JF*E, NV 724, 'Avions' magazine in their Clostermann special (issue 151) - the best recent and most detailed account of Clostermann's career - do not even attempt a compilation of Clostermann's score. Indeed, author Christophe Cony, a friend of Clostermann's, refers to 'The Big Show' as a 'roman' - or novel. In 'Avions' No. 100 Clostermann's score was given as 24 confirmed  and nine probables, making Clostermann the leading French ace of WWII. His 'official' score as promulgated by the French Air Force historical service (formerly SHAA, now SHD) is still 33 victories.

Thierry Dekker artwork from 'Avions' No. 151 reproduced here with the permission of editor Michel Ledet and the artist 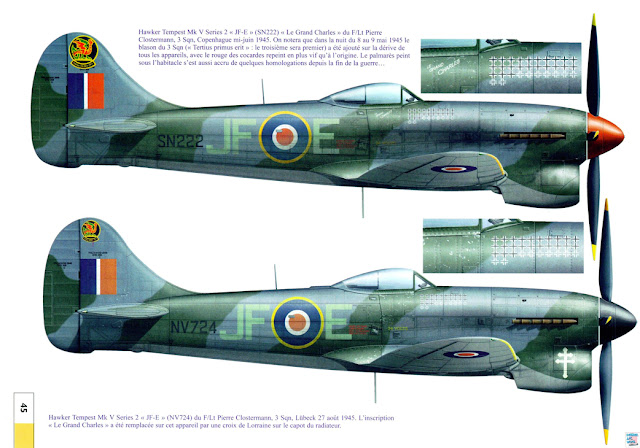 Posted by FalkeEins at 11:05 No comments:

The Academy model is very good on the whole. No real issues to speak of at all - aside from an incorrect rear radiator duct profile, but that's hardly visible in this scale. I've added some wingtip lenses and will have to add a whip aerial. Otherwise some of the kit parts are so small and so finely moulded they are bit difficult to see! Some 'experts' maintain that the wing shape needs to be re-profiled, but frankly there's not a lot in it - the biggest problem to my eyes was the over-sized tail wheel doors, which I've trimmed down a little. Decals going on - and for once even these are performing okay. You will note that I haven't worked terribly hard on getting a 'hard' camo scheme...done freehand after all..This is Clostermann's last JF*E which he had for a matter of weeks during August 1945 - so no weathering to speak of either ! 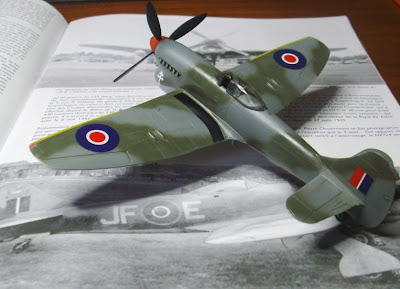 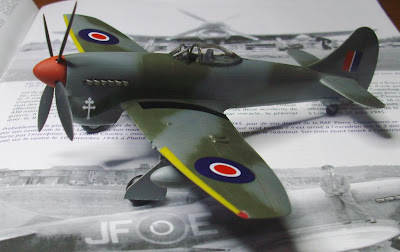 Posted by FalkeEins at 12:12 No comments: