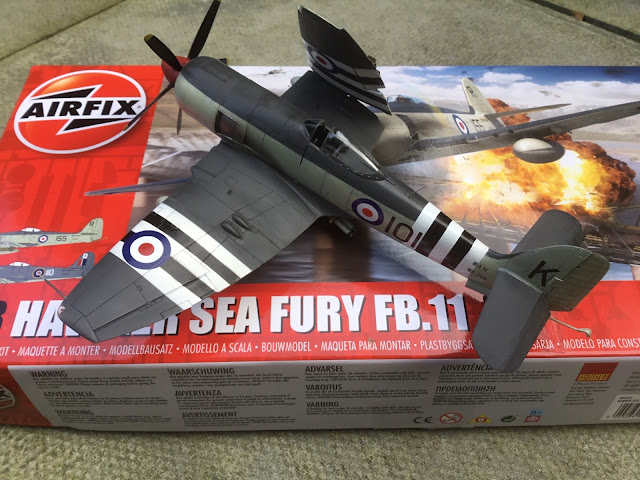 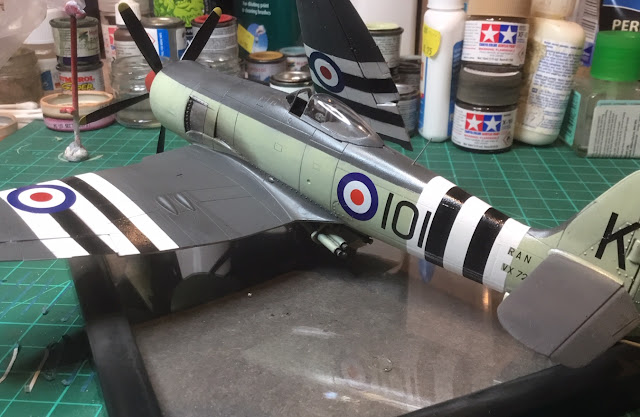 The new -tool Airfix Sea Fury is finally finished -what a lovely kit this is. Despite one or two small issues, especially around the cowl I can't be anything but pleased with the way this turned out. I used the Aeromaster Sea Fury sheet to do an example sporting stripes - FB 11 VX 726 aboard HMAS Sydney during 1952. Shame Airfix's decal options were so 'dull'. The Aeromaster sheet was of course designed for the Hobbycraft kit - so the stripes don't wrap around the fuselage all that well. They are in fact about one whole centimeter too short! The gaps were masked and painted as were the wing stripes .... 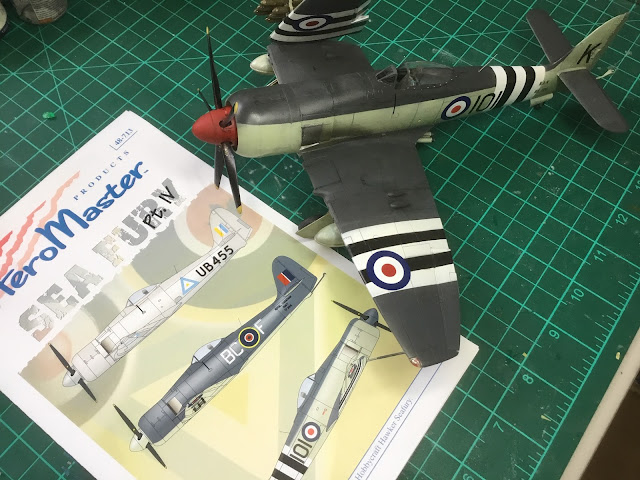 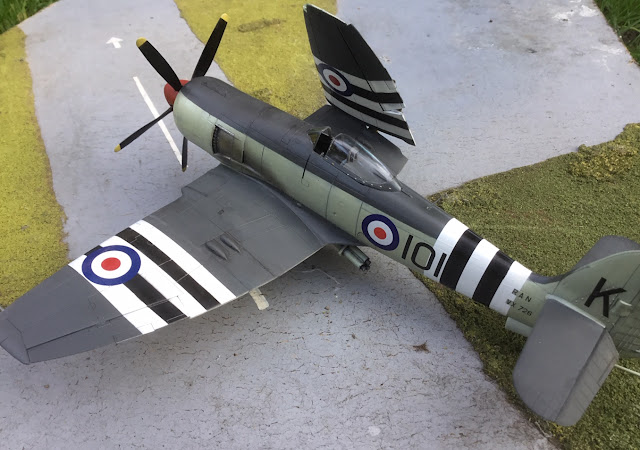 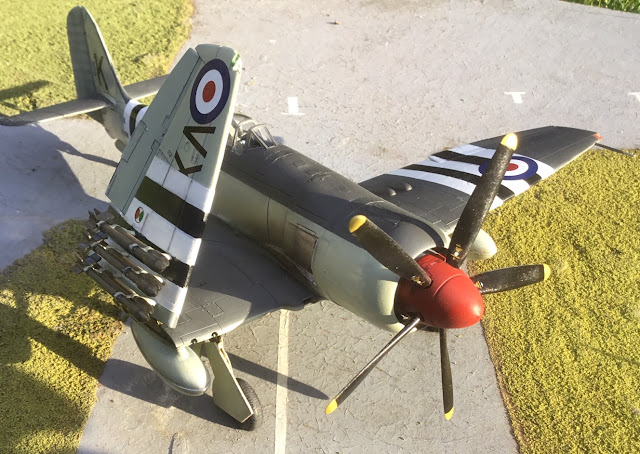 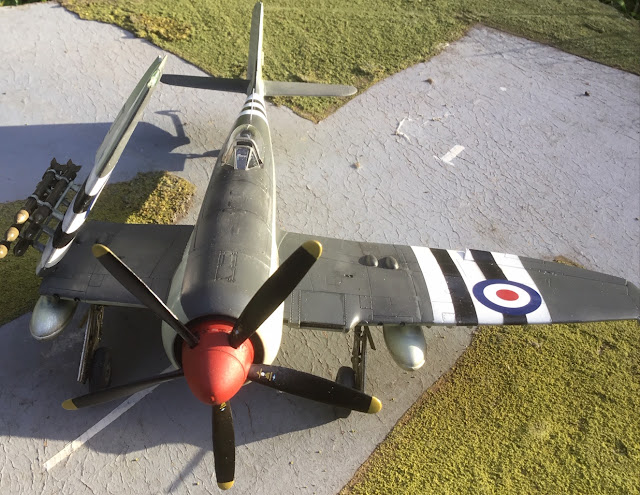 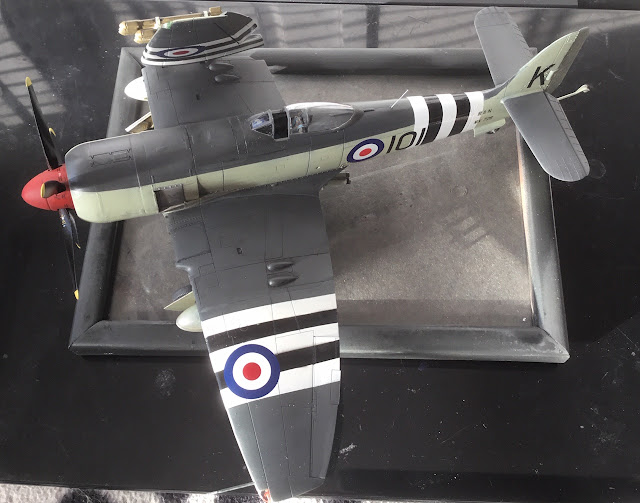 A long documentary from the video-tape era posted on youtube. The Korean carrier footage is at around the thirty-minute mark, well worth watching. A single click to view here.. 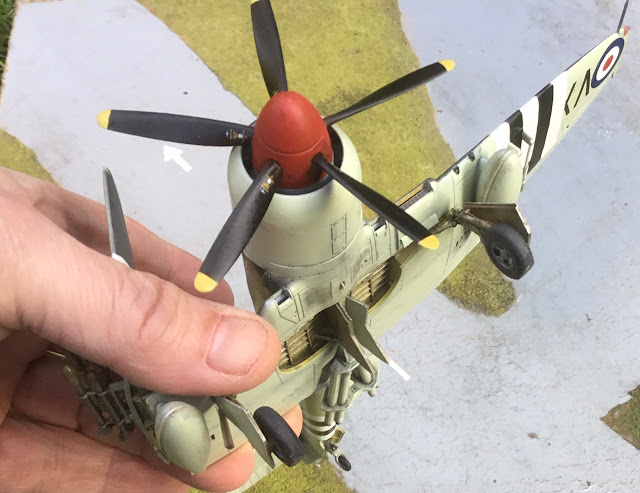 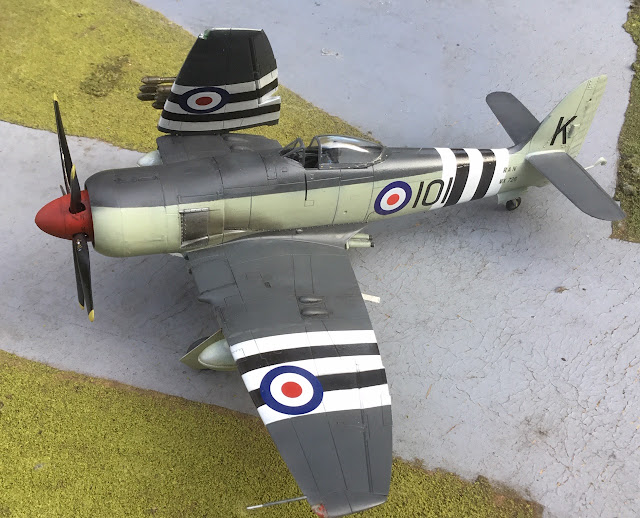 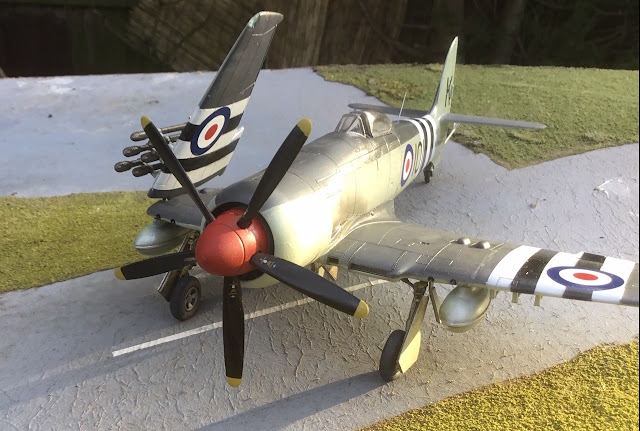 More pics of the build in progress and the real machine 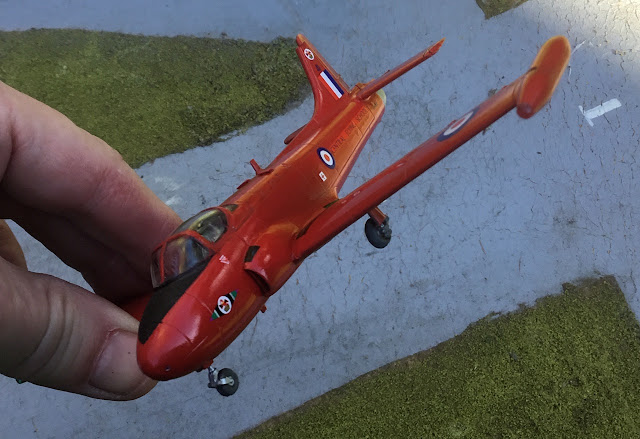 In the UK over the Christmas period the supermarket chain Lidl once again had a stack of Airfix kits on their shelves at something approaching 40% off RRP. These are starter sets with paints, glue and brush for just £4.99 instead of at least £7.99 retail.These make great stocking 'fillers' for just about anybody (well, perhaps not the mother-in-law...) and I made sure that people knew about them - in the end I received the Spitfire, P-51 and Jet Provost kits.The Jet Provost is a bargain at this price and is a very nice little kit. A breeze to build - apart from one or two detail omissions and a curious fit issue around the forward fuselage - which I note that Mike Grant also encountered in his AMW build review..(ie the two fuselages halves never actually meet around the front end. There's not much in it, but still...)

Here's a few images of the build and the finished model in the overall red of the Red Pelicans display team, Central Flying School, RAF Little Rissington, Gloucestershire, England, 1966. Detail views of the real machine at the RAF Manston history museum, including a close-up of the 'missing' fuselage vents..click on the images to view larger.. 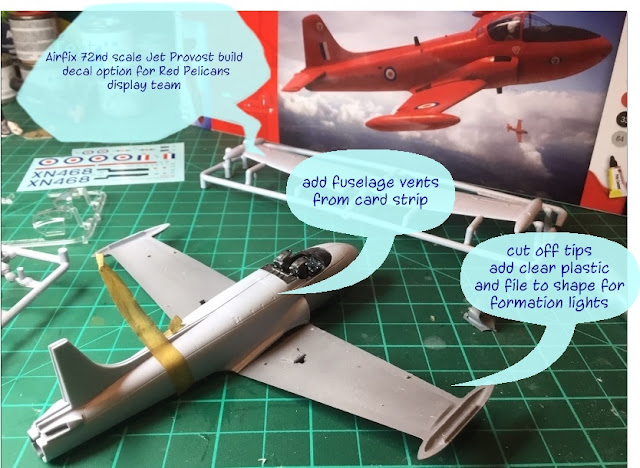 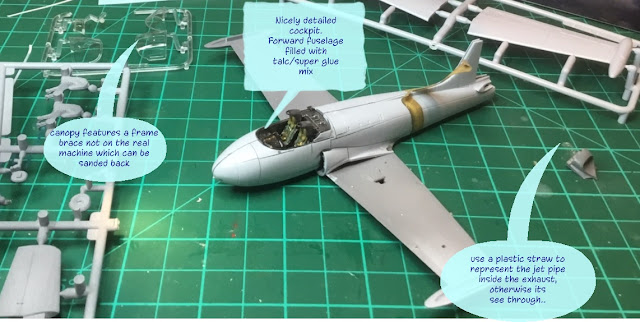 Below; note the canopy 'brace' is an internal feature - there is no external frame as portrayed by Airfix on the kit part - replicated with a piece of decal strip and sanded and polished back. Note the instrument panel coaming needs cutting back in the kit. 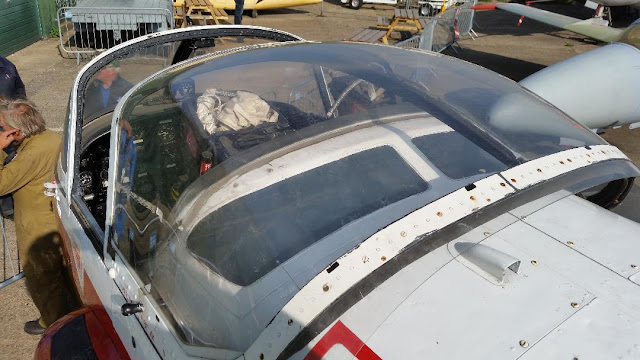 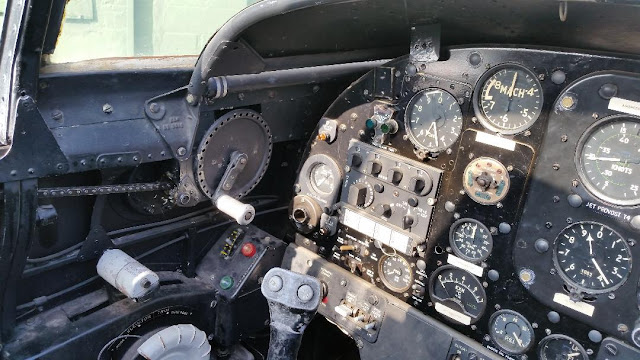 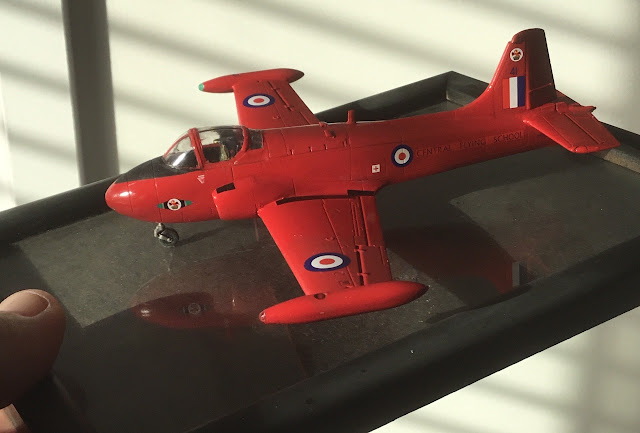 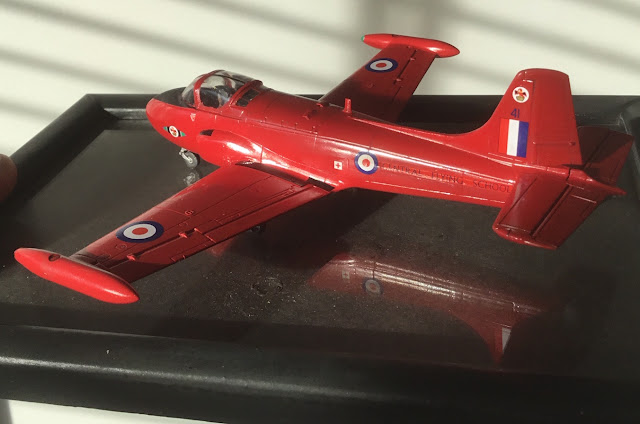 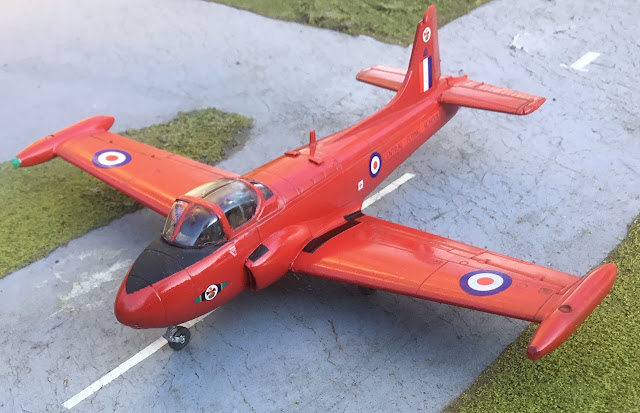 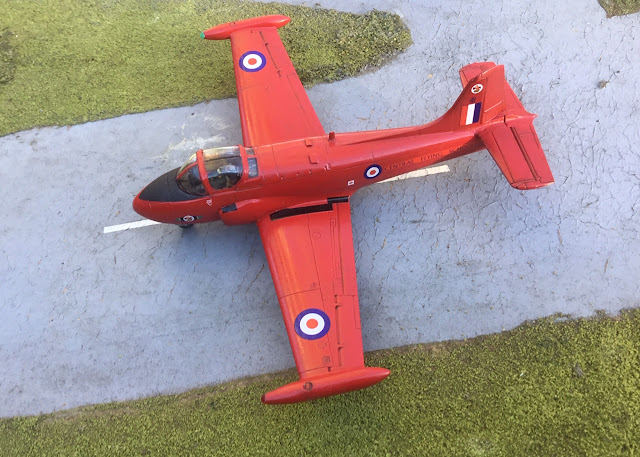 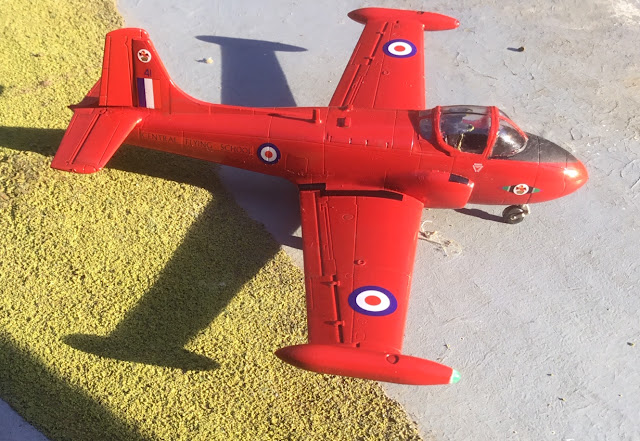 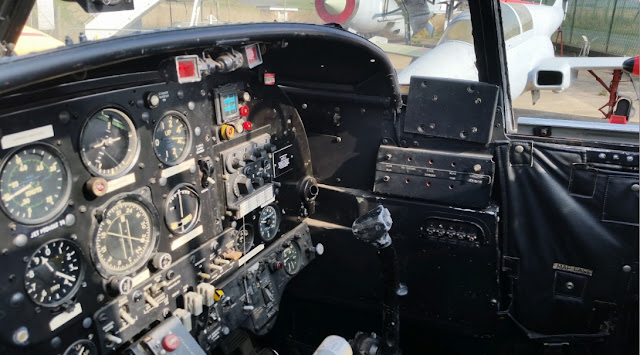 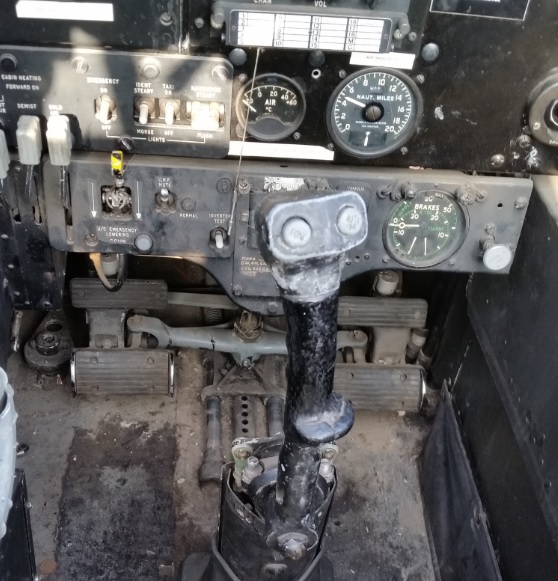