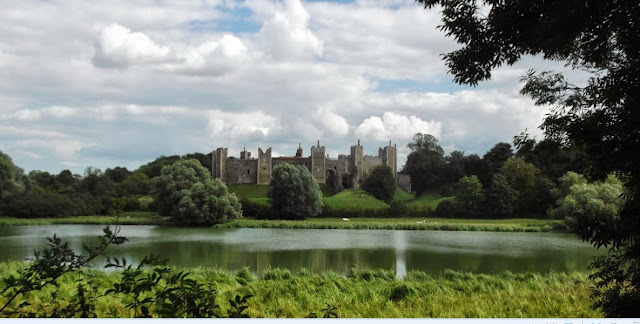 ...currently on my hols in the beautiful county of Suffolk. Above, 12th century Framlingham castle 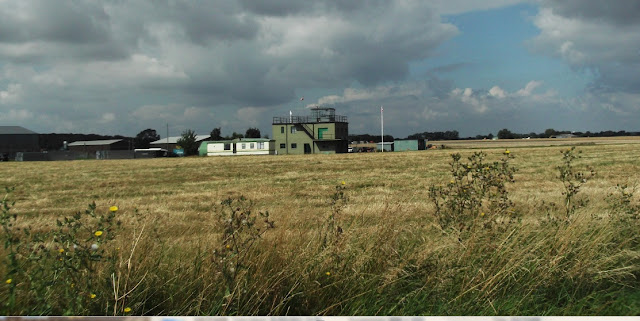 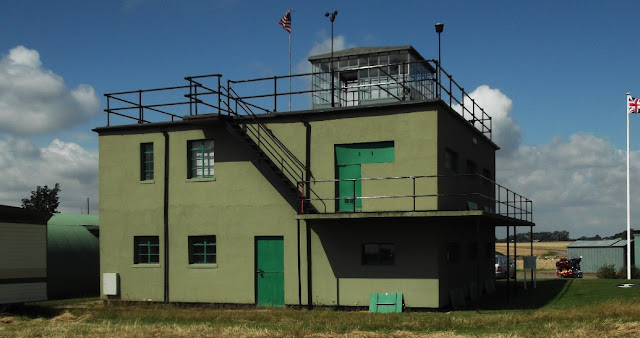 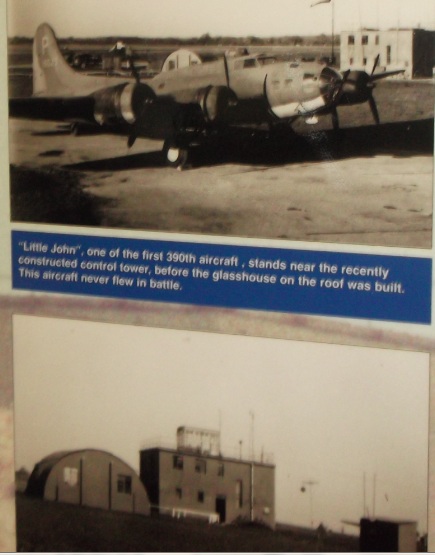 We also stopped at Rougham, east of Bury St Edmunds, from where the 94th BG flew during the war. Here the control tower has again been remarkably restored and preserved while the rest of the airfield is mostly given over to an industrial estate.. 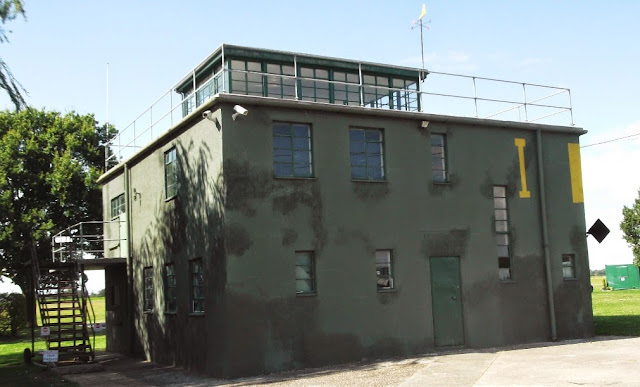 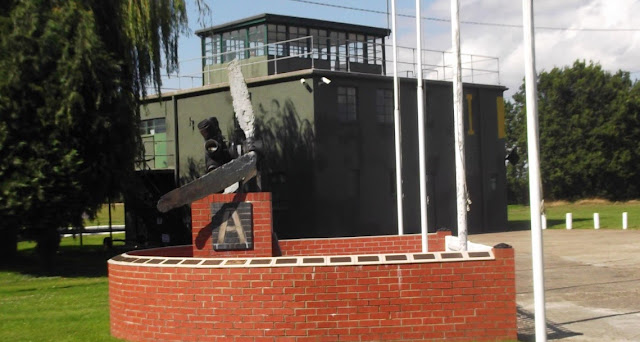 On 24 December 1944, Brig. Gen. Frederick Castle won a posthumous Medal of honour in the biggest 8th AF raid of the war ..

I also had to visit Thorpe Abbots, home to the 100th BG memorial museum, described by Martin Bowman in his "Airfield Focus" booklet as a 'national treasure'. Thorpe Abbots is just over the county border in Norfolk east of Diss - and, I found, very difficult to locate since the authorities apparently do not allow road signage from the main A143 Norwich/ Gt Yarmouth road. The speakers in the 'glass-house' atop the tower broadcast radio chatter, engine start-up and fly-by noises - very atmospheric! 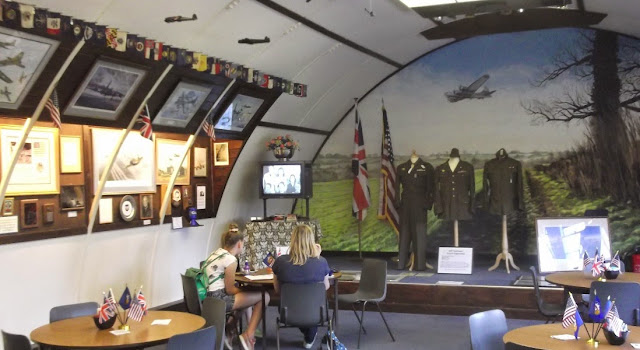 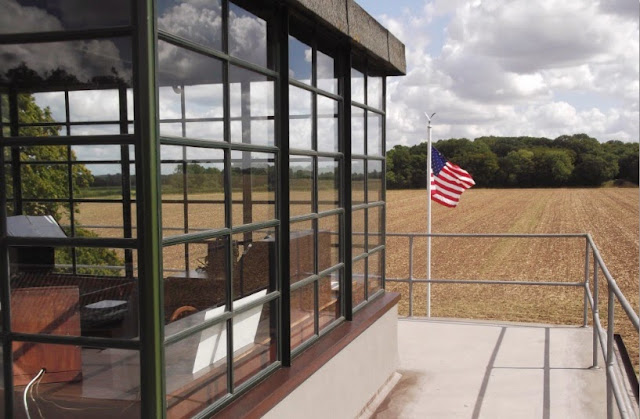 View from the 'glasshouse' on top of the control tower at Thorpe Abbots looking towards the 'unlucky' hard-stand 13 as seen on the airfield model below with its typical 'frying-pan handle' dispersals, bottom right corner..and a view of the surviving taxiway in front of the control tower..the main runway at Thorpe Abbotts, one of the longest constructed during the war in East Anglia, ran parallel to the taxi-way bottom right.. 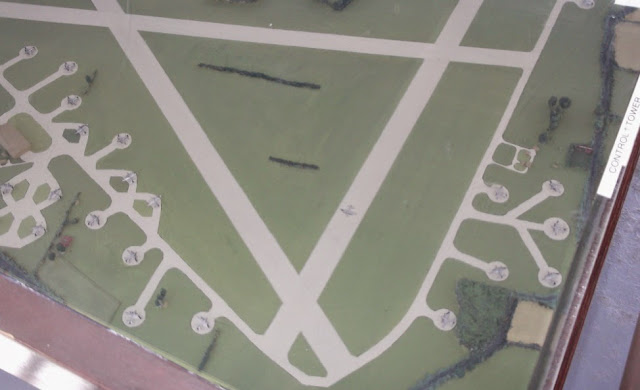 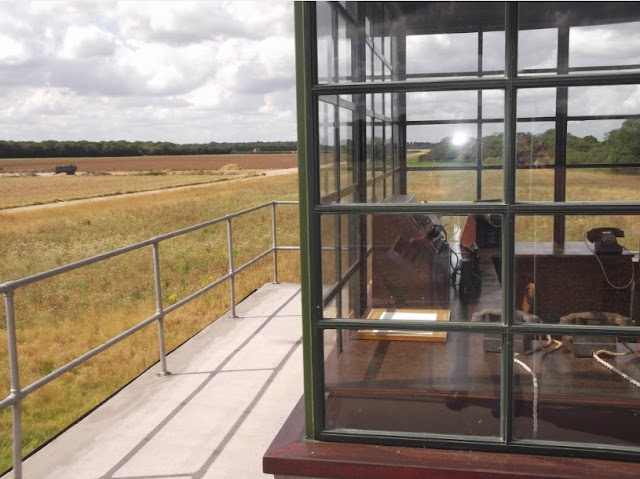 ..although the old airfield is now virtually fully returned to agriculture, stretches of the southern perimeter track are reasonably well-preserved  - heavily-laden B-17s once picked their way along this route... 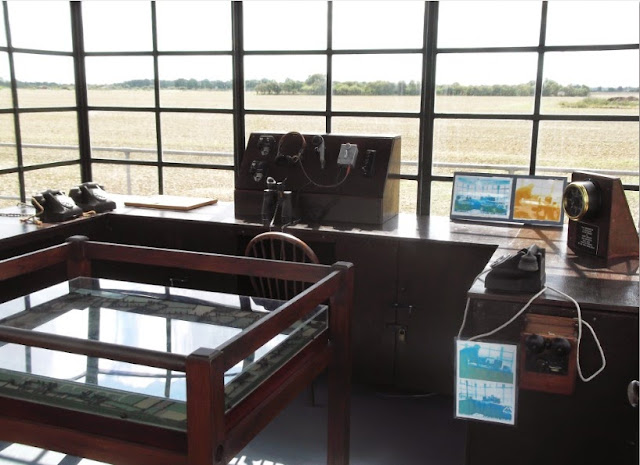 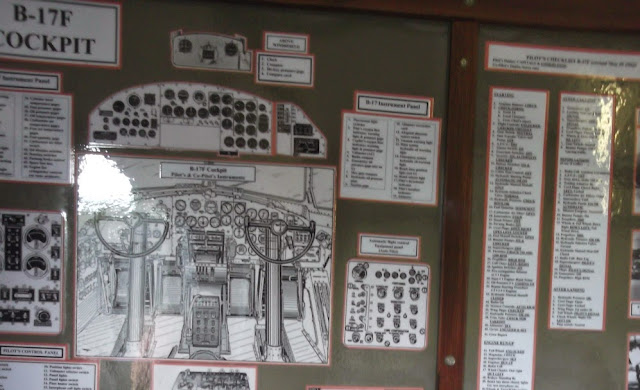 Model displays in the museum 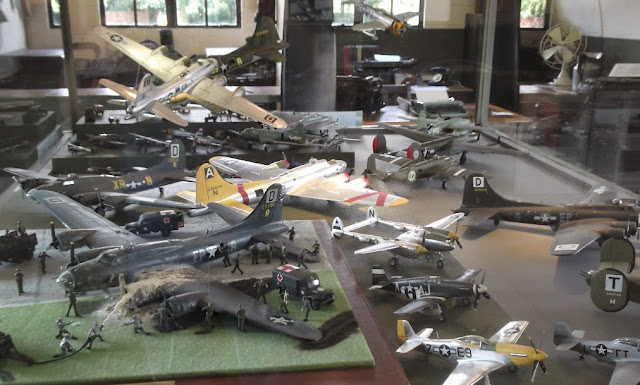 I also called in at Leiston, home to the 357th FG during WWII. The old airfield - today the 'Cakes and Ale' caravan park - now has its own 'Heritage Centre'. There was nobody around but at the park reception they kindly gave me the key to the 'memorial hut'... 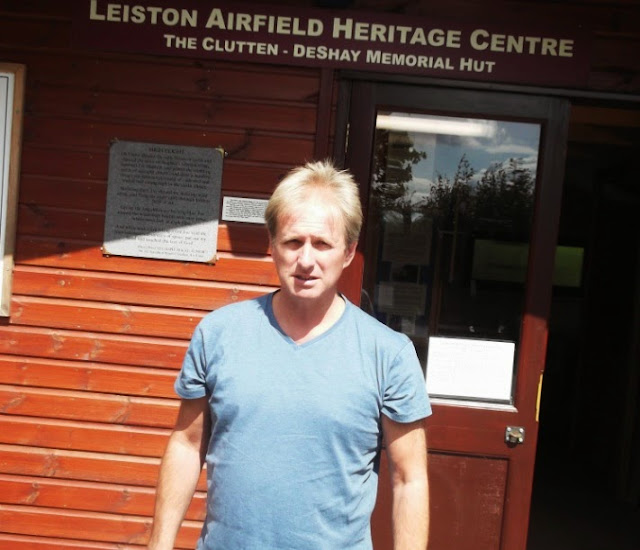 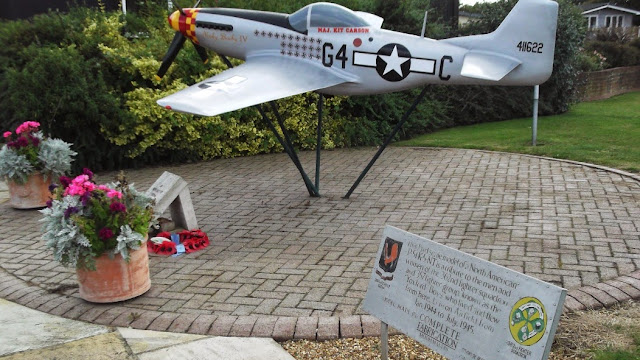 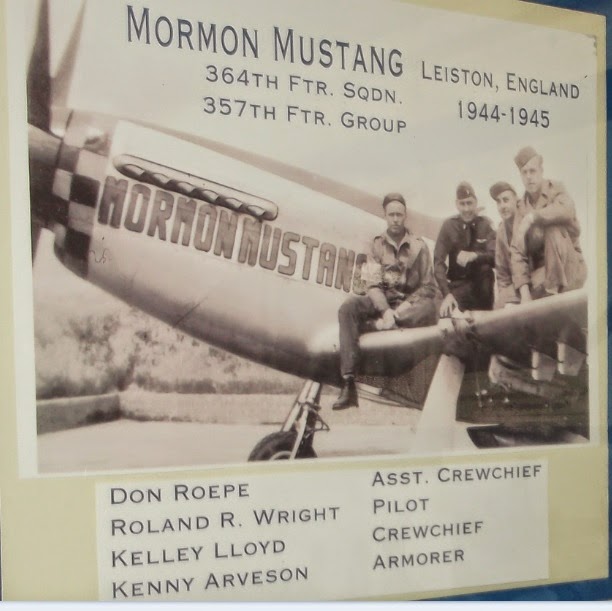 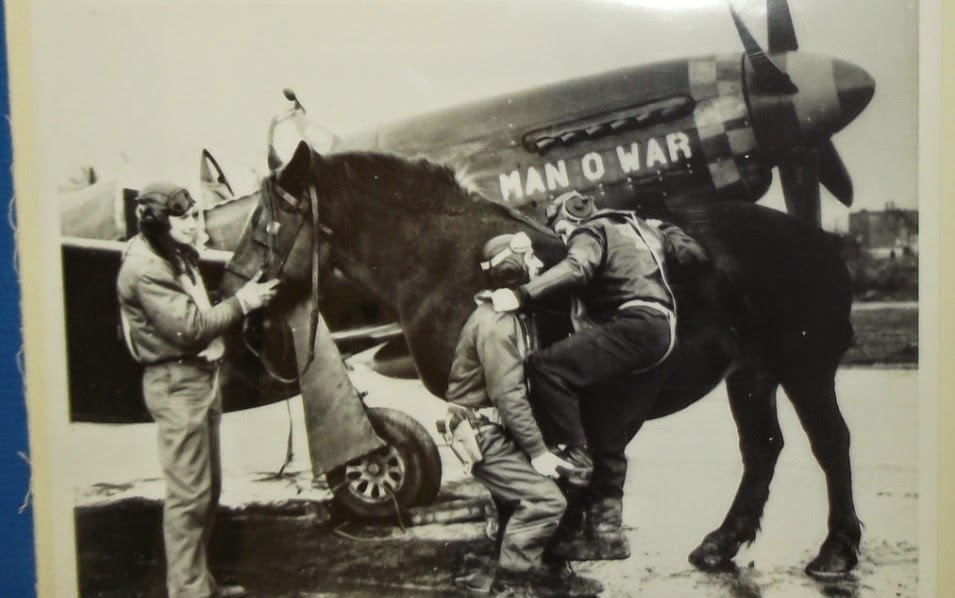 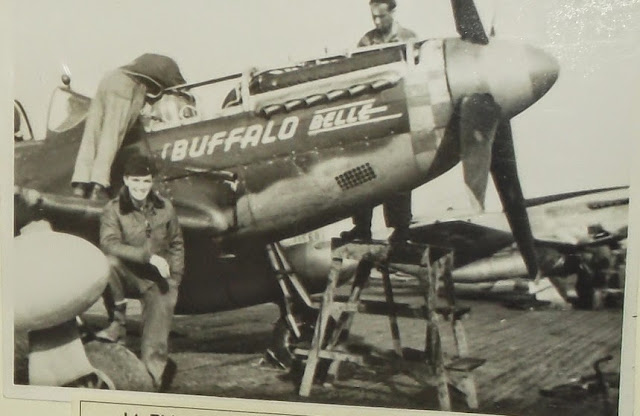 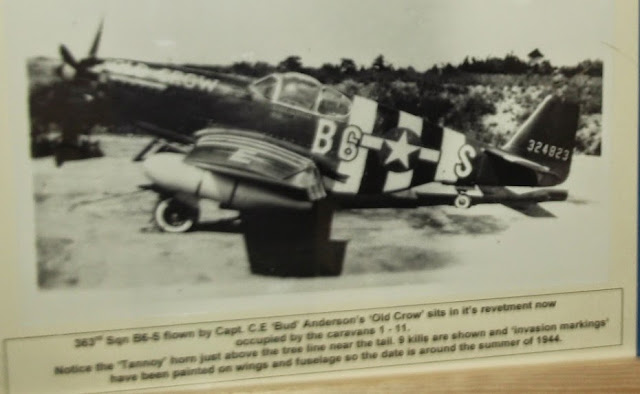 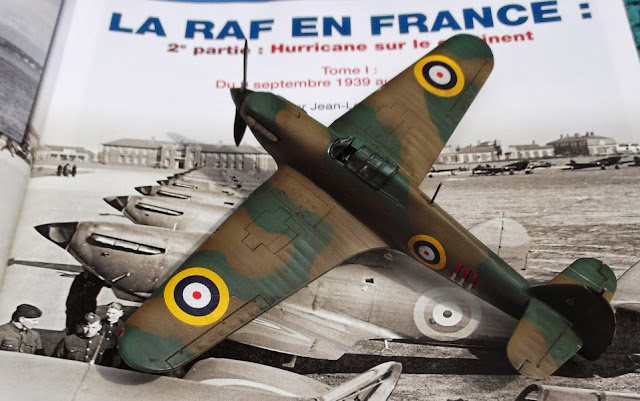 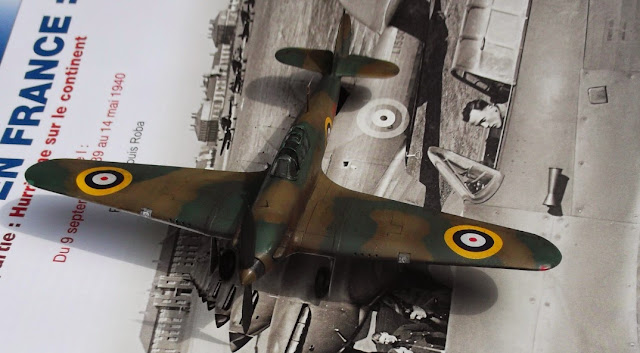 ...finished the first of my Airfix new-tool Hurricane Mk. 1 fighters which I started back in July here in the colours of the first squadron to receive the type, No. 111. 'Venturi' tube is missing from underneath the port cockpit sill. Neat kit, once you get past the disappointing wing fit, nicely detailed although I've added the cowl bead sight and pilot's foot step from fuse wire. Finished in Humbrols enamels, although my dark green (30) came out a in a very strange shade requiring a bit of a re-spray. 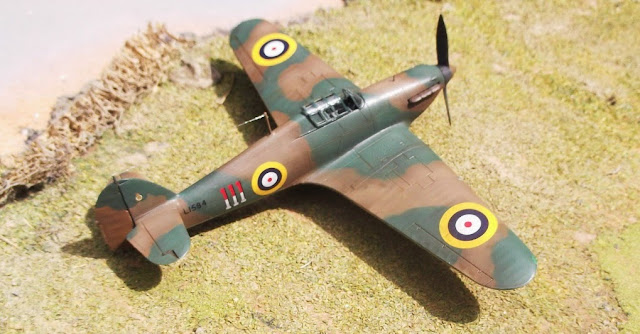 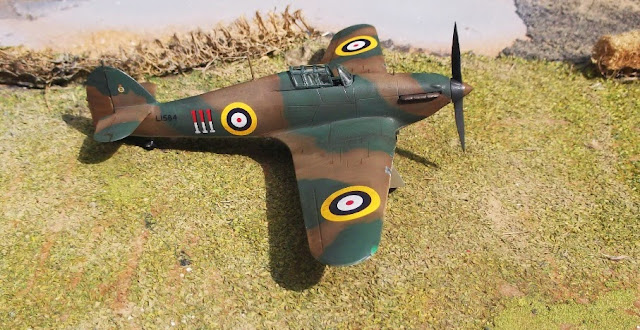 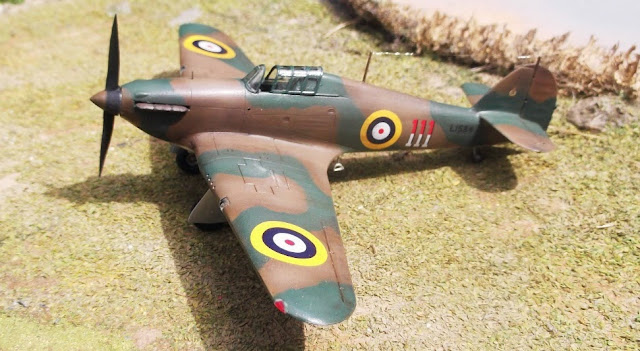 Like many I was pretty disappointed with the new Eduard Bf 109 G-6 when I first got my hands on it. See my in-depth in-box review on this blog.  I don't think I went as far as some who more or less declared this kit unbuild-able, to be fatally flawed, and all those other negative comments. While I admit to squirming quite a bit at first there are now one or two nice builds appearing on the forums; even my new friend Mr. Gary Hatcher has finished one (see the August issue of SAMI). While I can't say I'll grow to love it, I have got over the disappointment somewhat, stopped "squirming"  and started to crack on with what is in fact a very 'build-able' and enjoyable kit. If you're going to get this kit, buy one from someone who thinks it's fatally flawed, you might get a good deal. Note that I am in no way dismissing the issues - while most criticism focuses on the 'over-scale' issue the landing gear will look incredibly rough if not dealt with - no compression, silly stance and hopeless representation of the brake lines running down the gear struts. I note that some builders have cut away a little bit of the forward edge of the gear bay to get more forward lean. Not ideal, but helpful. Elsewhere others have cut the back of the square peg in the top wing bay so the gear leg can slide back a little to give more forward lean; whatever the solution there's some work to do there. But mostly I have just decided to treat this kit as a 'fun' build. Here's where I am with the cockpit which is mostly etch...in itself a test of my 'skills'... 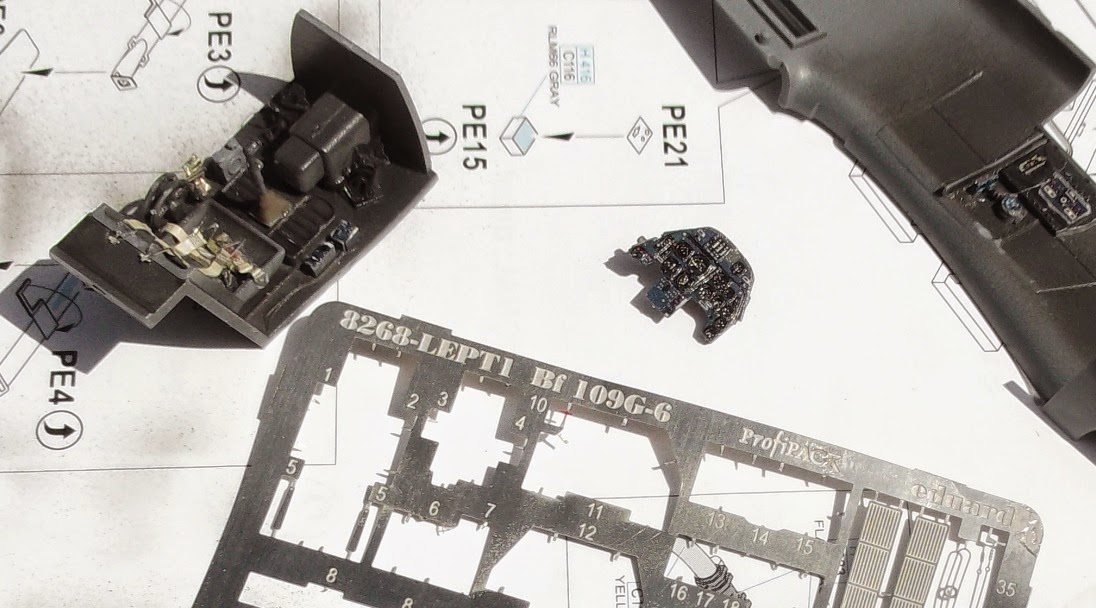 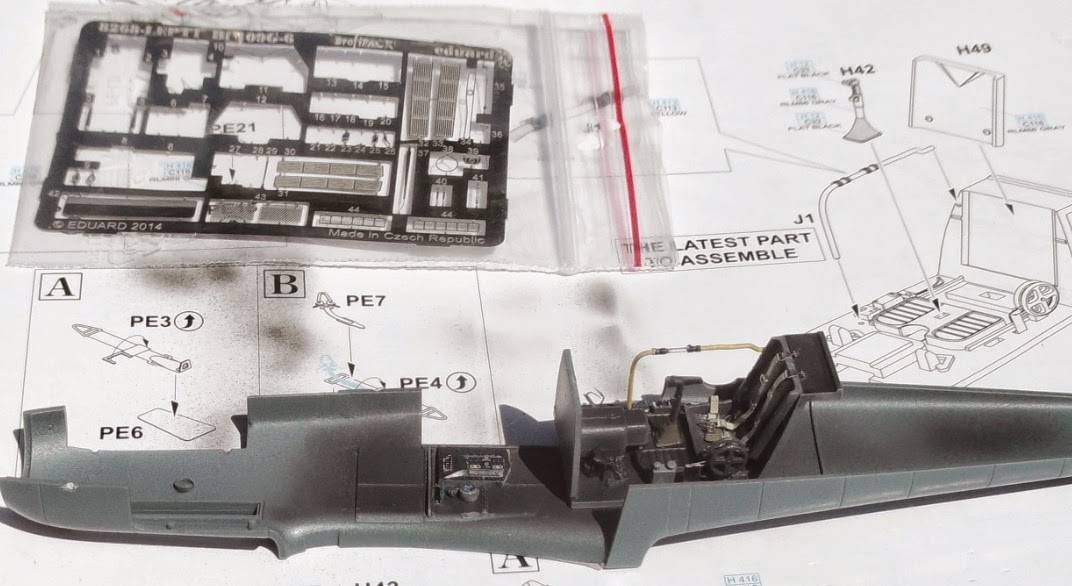 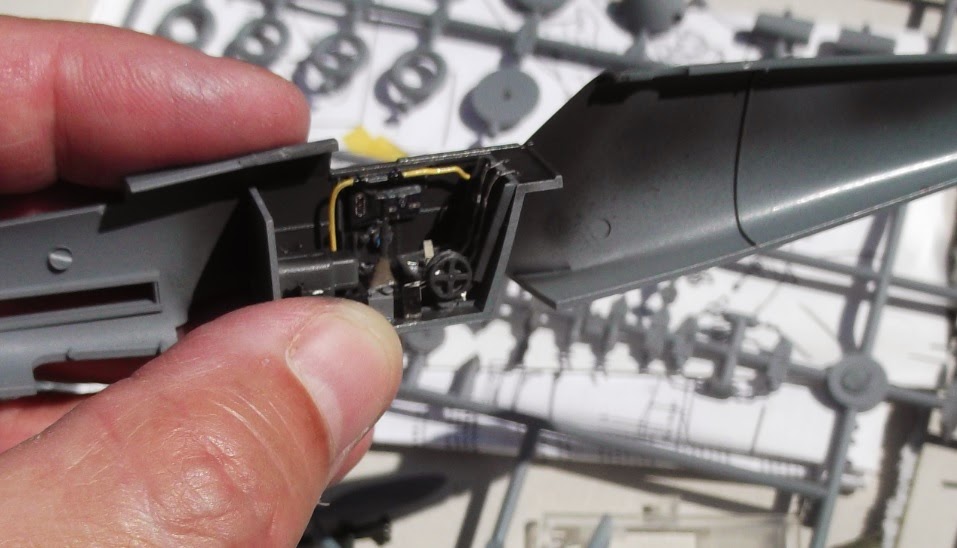 oh and while other blogs go on holiday, we go on holiday to blog so see you again very soon..
Posted by FalkeEins at 09:46 1 comment: