Airfix Spitfire XII (6) - into the paintshop 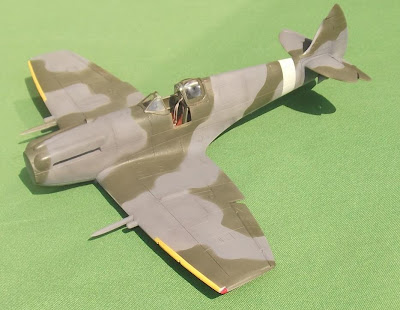 Relatively hassle-free so far - used Humbrol enamels which spray beautifully. 'White-tac' strips for the camo took about 2 hours to apply. I'm not terribly happy with the kit 'open canopy' option, since the thick clear plastic part meant to represent the open hood has a rather 'fish-eye' appearance to it. Just hoping now that the decals work okay. 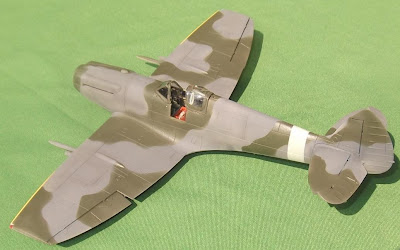 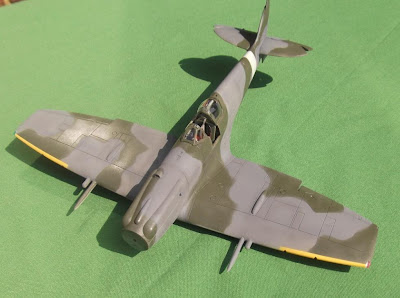 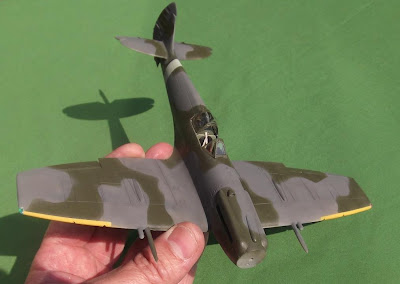 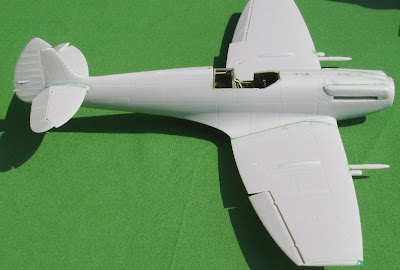 The warm spell continues, 24, 25, 26 C and rising. Getting too hot to model and paint. Is this some sort of record for April? Or is this going to be our summer like it was last year?

Latest on the Spit XII. I'm having a bit of trouble with this one. It's all me I should add. Perhaps I'm not doing enough modelling or something, but I keep making silly mistakes. It fits well ..and yet it doesn't. Plenty of filler on all the major joins. The cannon especially proved rather hard to fit and I ended up cutting away rather more of the wing than I wanted to. Drilled out some holes for the flap actuator rods in the upper wing but somehow I don't think it will add anything to the 'look' of the kit so I might well fill those in again. Drilled out the exhausts. Added some wing-tip nav lights from coloured plastic filed to shape. The intake needed lots of scraping and sanding to get it looking tidy. Posing the stabiliser wasn't easy either. There is a very small part that clips on to the rudder to line everything up - needless to say I couldn't get it to fit. I don't like the 'step' on the lower nose part either so that's all filled and sanded/polished. Just got to add the cowl intake which I'm scratching from a 72 scale bomb cut and filed to shape and then perhaps I can think about getting some paint on the beast..Phew! 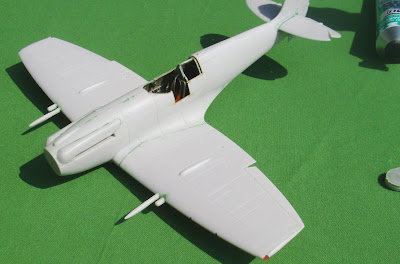 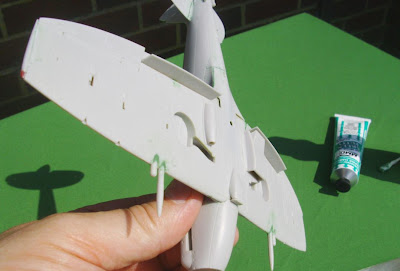 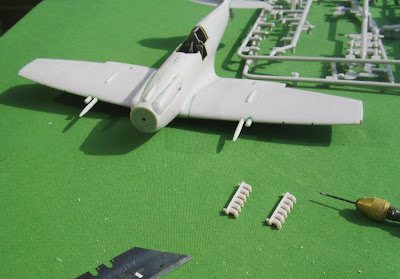 Posted by FalkeEins at 06:09 No comments:

Here in the 'Garden of England' our spell of 'summer' weather continues - and the Battle of Britain museum just a mile up the road doesn't open for the summer season until Easter! Another day in the sun in the garden. The modelling table is out of the garage and set up on the back lawn. A few quick shots of the cockpit in situ and the fuselage and wings assembled. Fit was not brilliant on the lower surface joins, but that may be because the cockpit location was not very positive. Next job will be to remove the upper cowl intake and replace it with something a little more prominent..click on the pics to get in close. 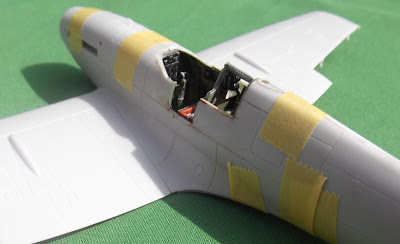 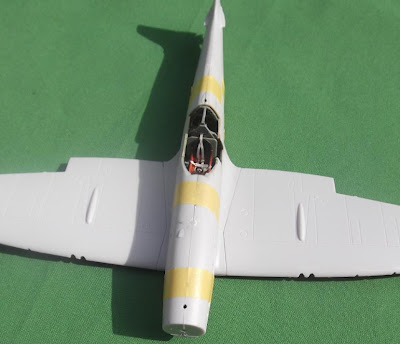 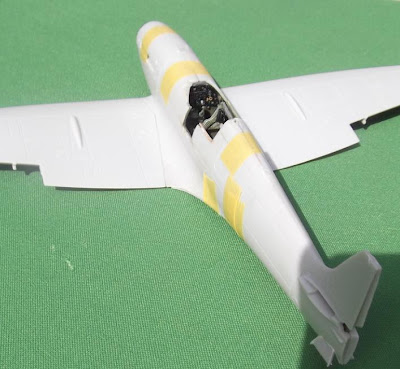 As usual with these new tool Airfix kits there are still some gaps to fill. Much of that may well be down to my own cack-handedness since other builds of this kit don't seem to mention any particular concerns - and mostly the whole thing just clips together quite brilliantly. For gap-filling I use Squadron Green Putty rubbed down with my daughter's nail polish remover.. 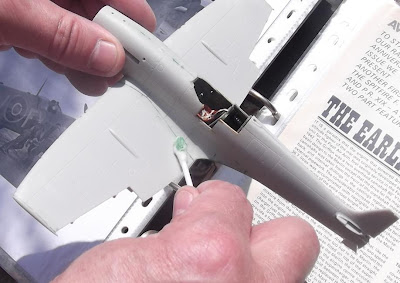 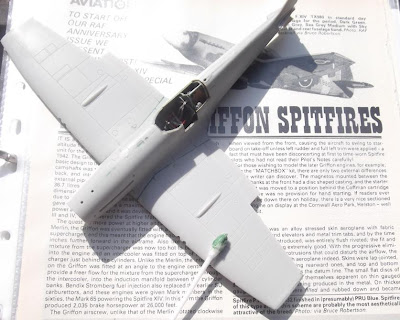 Posted by FalkeEins at 04:10 No comments: 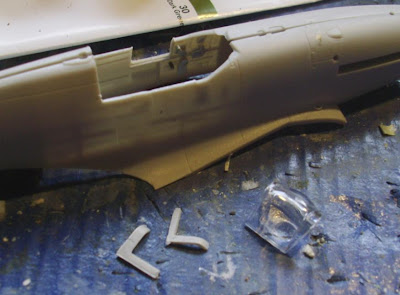 Some work on the cockpit of my Airfix Spitfire XII - while waiting for some decent etch seatbelts to arrive.
Above; cutting back the fuselage sides to accomodate Airfix's unusual 'open canopy' option - which I'm not too sure about on second thoughts. Trying to work out which bits of the clear part to mask and what colour to paint them..below 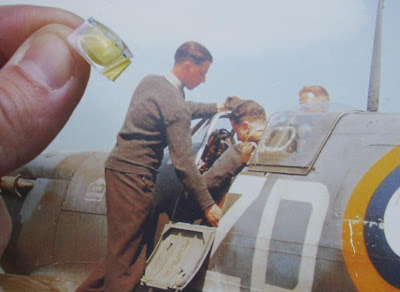 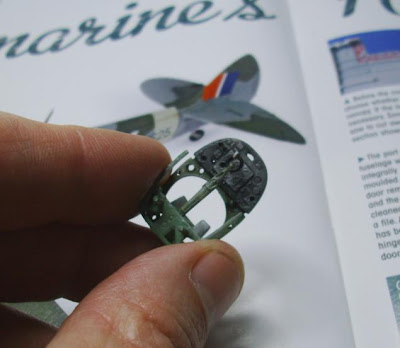 The cockpit detail OOB is not bad at all  and includes a neat control column, seat, adjusting handle, moulded instrument panel - which I might just cover with some etch, throttle quadrant (discovered it on the sprues after scratching mine).  Rudder pedals are  a little disappointing comprising two solid lumps of plastic. Still time to replace them... possibly. All washed with Raw Sienna oil paint. Once inside the fuselage half the cockpit and bulkhead assemblies complete with oxygen tanks look very good and fit just as well.

I've subsequently added an etch instrument panel and seatbelts, added the compass under the panel and re-located the seat further forward in the cockpit - not as shown below. 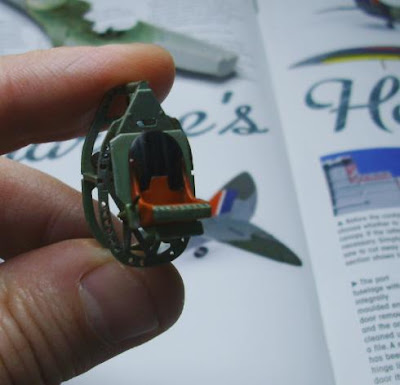 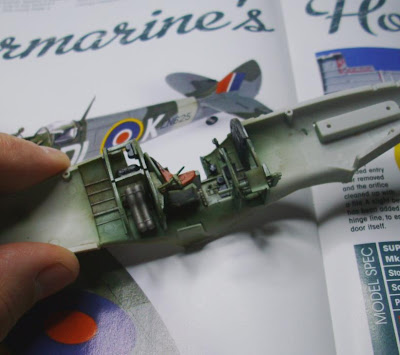 Posted by FalkeEins at 10:40 No comments: 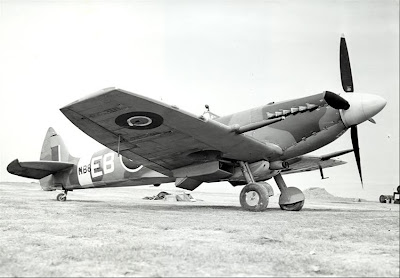 The second kit decal option and box-top illustration subject is EB-B (MB882) , a 41 Squadron machine also based in Hawkinge. Image via 'blueyonder' photostream on flickr. Combat report posted by 'bombed' on BM. Click on the image to read the text and enlarge the pics. Note the IFF aerial under the starboard wing and the beam approach antenna under the rear fuselage. 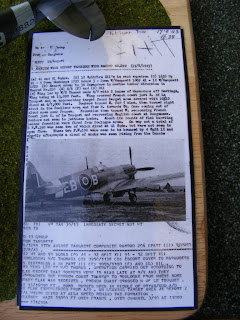 Spotted this history of EB-B (MB882) posted by Dan Johnson on The Aviation Forum..."MB 882 was a Flight Commander's aircraft, first flown by F/L Don Smith RAAF and then F/L Terry Spencer when Smith went on to command 453 squadron. It had one of the last two Spit XII kills of the war when F/L Spencer shot down Luftwaffe Experte 'Bully' Lang and his 190 on 3 September 1944. MB882 took hits to the tail during that fight. Spencer downed a number of V-1s flying MB882 and it's the bird he was flying when he 'tipped' a V-1, something difficult to do with a clipped wing Spit. Peter Cowell was flying MB 882 at low altitude over the Channel when he 'bounced' off the water, shattering evenly all 4 blades about halfway down on each. He barely limped back at full throttle. This was in June 44."


2002And has already finished his Airfix Spitfire XII and made this great video. A single click to view here

Posted by FalkeEins at 07:27 No comments: