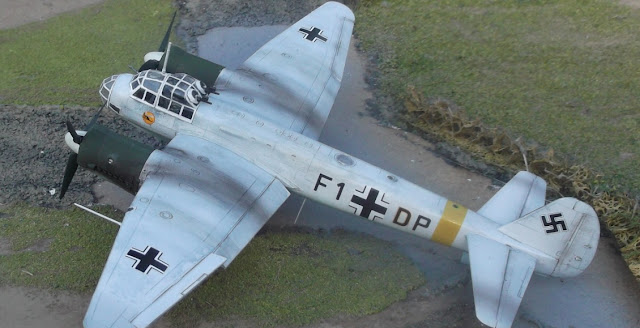 Second finish of the year/month/week - although this one wasn't started this year, or even last year come to that! The 'new tool' Revell Ju 88 in 1:72nd scale finally finished - here as a machine of KG 76 in Wintertarnung from the AIMS Ju 88 Bomber decal sheet. Reference photo is on page 37 of the AirDoc Junkers Ju 88 A/D monograph. This kit was released around November/December 2011 and I started building it straight away. It stalled about a year ago, some time around the painting stage, but having finished the Wellington, I've spent a few days getting this one off the 'shelf of shame'. The rather rough winter scheme was achieved more by accident than design after I tried out the hairspray technique and ended up peeling off most of the upper white layer off in one go, making a re-spray necessary. That looked terrible but in the end I've grown to like it. According to AirDoc this machine has had an engine change but in the photo the sunshine is so bright that not a lot of detail is visible. I encountered similar difficulties when trying to photograph this one - too much light and everything is bleached out...you can click on the images to see a larger view.. 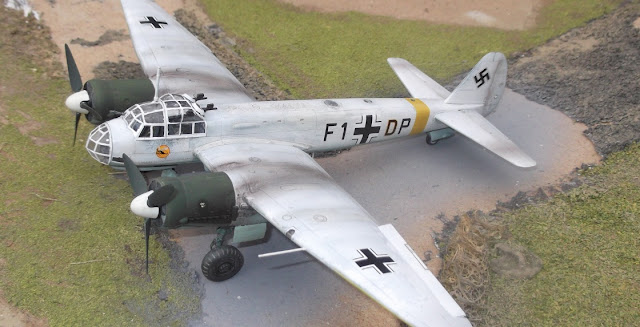 The kit itself is extremely detailed but overly complicated IMHO - the cockpit and forward fuselage alone has around 50 parts, but little can be seen. Each piece of ordnance comprises seven separate pieces. The canopy glazing was masked with Tamiya tape in a marathon session. I've added some brake lines from wire and an aerial wire from hypo-glue for the photos. I think perhaps the model looks a 'stalky' on its undercarriage. Those parts of the kit decal sheet I used worked very well.. for Revell.

The AIMS decal sheet used in this build is reviewed here
http://falkeeins.blogspot.co.uk/2012/06/new-junkers-ju-88-decals-from-aims-john.html 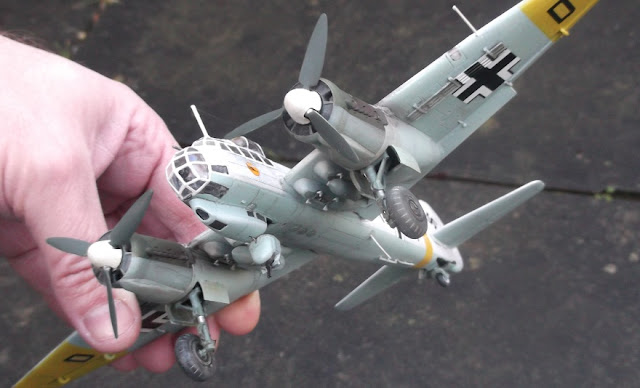 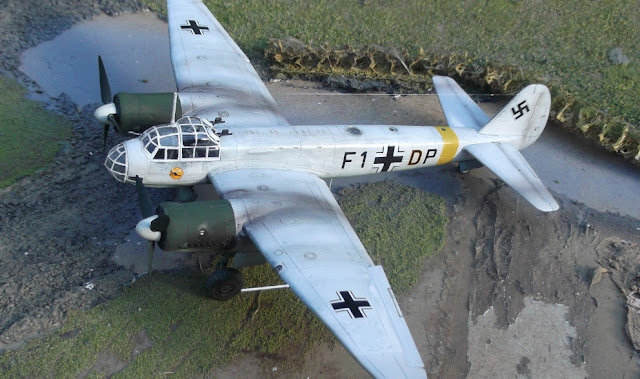 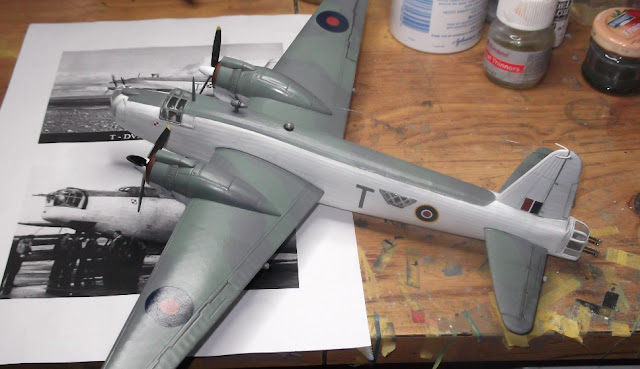 A small tribute to the brave Polish aviators who flew Coastal Command Wellingtons out over the Atlantic from windswept Scottish bases during WWII. This is "T" (DV 597) of 304 Squadron from the elderly Revell kit (minus the serial for the moment..). Brush painted finish 'dirtied' with an oil wash to bring out some of the nice surface detail. Decals from the spares box. For such a relatively poor quality kit I must admit to being quite pleased with the way this one turned out, quite tempted to do the Trumpeter Wimpy now.

Following heavy losses suffered in the bombing raids over Germany, 304 'Land of Silesia' Squadron transferred in May 1942 from Bomber Command to Coastal Command. After a short training period at Tiree from May 1942 in anti-submarine operations, the squadron left Tiree for North Wales for operations over the Bay of Biscay in June 1942. Operations over the sea involved flying very long missions over the Atlantic. The unit returned to Scotland to face the difficulties of operating from Benbecula in the Outer Hebridies in the winter of 1944-1945 and over Atlantic waters.

"....The first impression on almost everything else seemed to be bad. The new airbase was on the tiny Isle of Tiree in the Western Isles, only a few miles wide and less than 20 miles long. The place looked howling and under constant onslaught of capricious Atlantic weather.There were virtually no navigational aids. Living quarters were mere Nissen huts, always damp and rattling under heavy winds.  The airmen had no previous experience of flying over the sea and many strenuous hours of patrolling in gray monotony were needed. Generally low marine knowledge of aircrews was a hindrance in the squadron's conversion. Most of the Polish airmen never even saw a submarine, and one crew attacked a solitary rock of Rockall jutting out of the sea some 300 miles west of Scotland. Despite all this, the transition from the Battle of Germany to the Battle of the Atlantic fared well.
No. 224 (RAF) Squadron flying Hundsons was also stationed on Tiree. A few days after their arrival, the Poles got to know their British colleagues and immediately a healthy, friendly rivalry was born: who would sink the first U-boat. Soon the great comradeship by the British was displayed, when their CO had all his aircraft ready within half an hour, for a search of one Polish Wellington ditched in the Atlantic. On 18 May 1942, S/Ldr Poziomka made the first operational sortie, a six-hour patrol over Atlantic's Western Approaches. From that day on, Polish Wellingtons were regularly airborne for U-boat hunting. On 26 May, the crew of navigator F/O Skarzynski spotted and attacked a U-boat, which was the first attack of that type by Polish aircraft. British Admiralty believed it to be a successful one and that the U-boat had been damaged...." 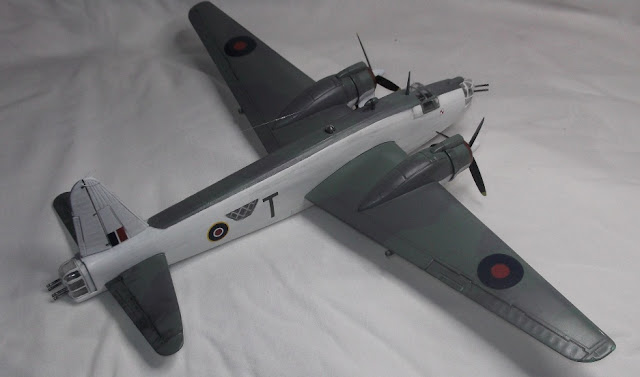 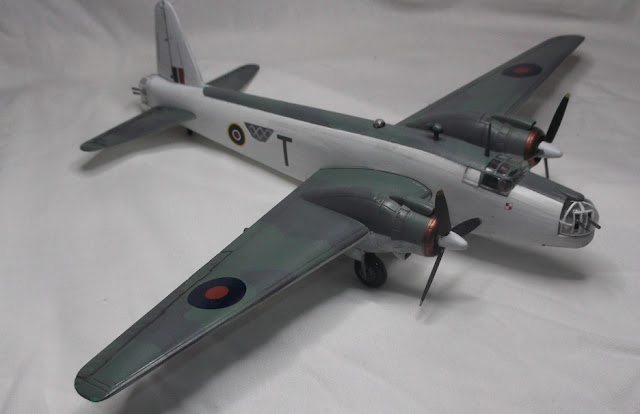 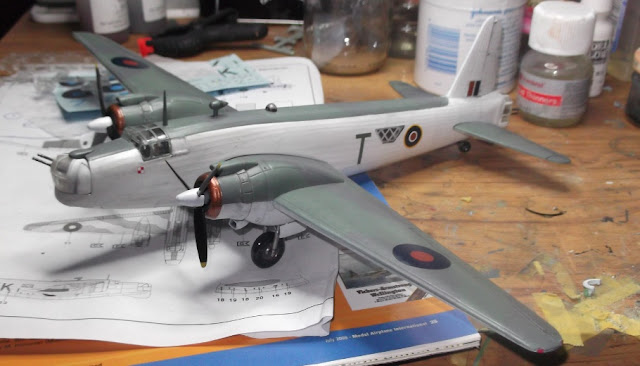 .. from the superb 304 (Polish) Sqd blog - a neat pic of a Wellington in difficulty on Benbecula, image possibly 'colorised' but so close to how I finished my model that I had to post it here! 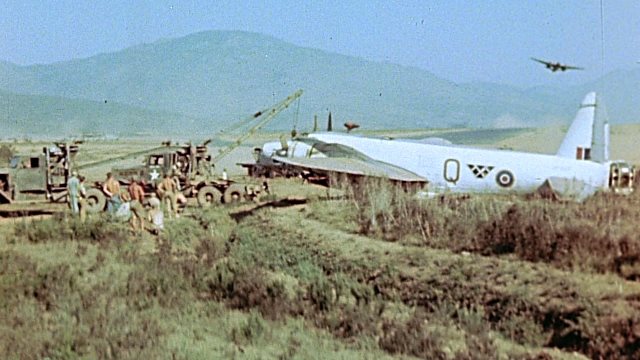