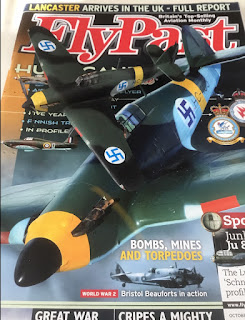 The Hurricane had a surprisingly brief career in the Finnish air arm. Twelve machines were purchased at the end of the Winter War early in 1940 from RAF stocks although two failed to arrive in Finland. The ten that did arrive in Finland touched down after the Finnish defeat in mid-March. By the time of Barbarossa the Hurricanes - in service with LLv 30 - were deployed to defend south-east Finland and first saw combat on July 2, 1941, shooting down two Polikarpov Chaikas. A DB-3 bomber was downed the next day followed by two more Soviet types the day after that. In both instances the Hurricanes had to break off combat after engine problems and starved of spares the Hurricanes were subsequently grounded for long periods. Even items such as spark plugs had to be retrieved from shot-down Soviet Hurricanes. Indeed the Soviets had specifically asked Britain not to supply the Finns- ultimately Britain declared war on Finland towards the end of the year. During 1942 the Hurricanes flew with LeLv 26 based in Helsinki-Malmi and were primarily used to prepare pilots to fly the Fiat G.50.

My model is another build of the new-tool Airfix Mk I, decals from Xtradecal representing Hurricane HC-451. 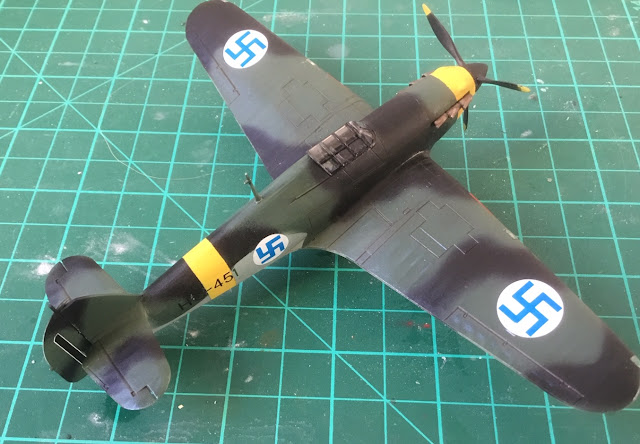 Below; 'HC 452' is the machine in the FAF museum. 'HC 465' was a Mk II delivered duing 1943 and owner Philip Lawton who lives in Finland had his restored example (see below) painted up in the scheme it would have worn during the war. 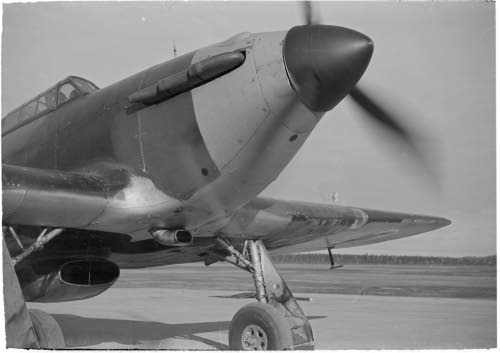 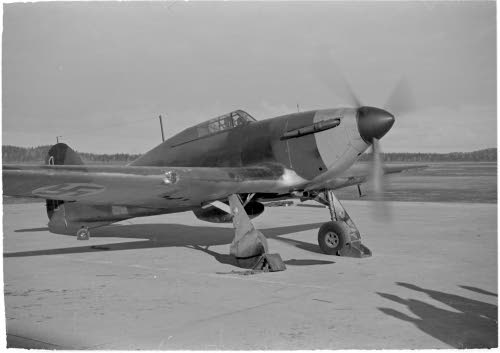 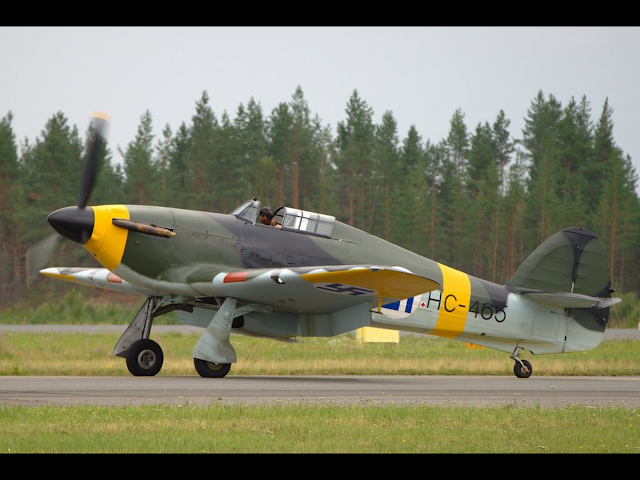 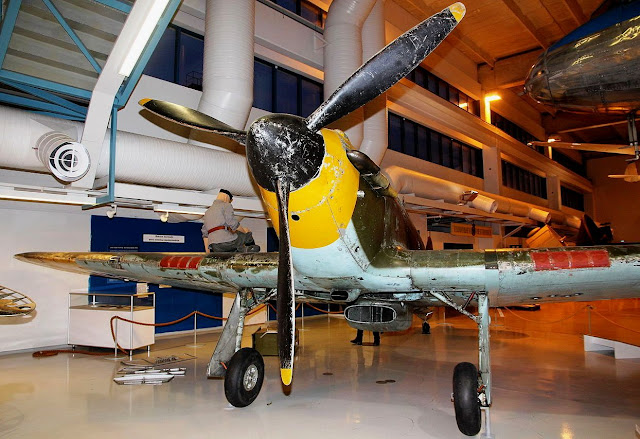 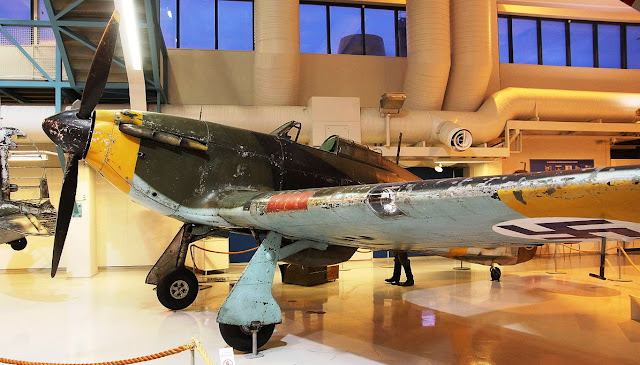 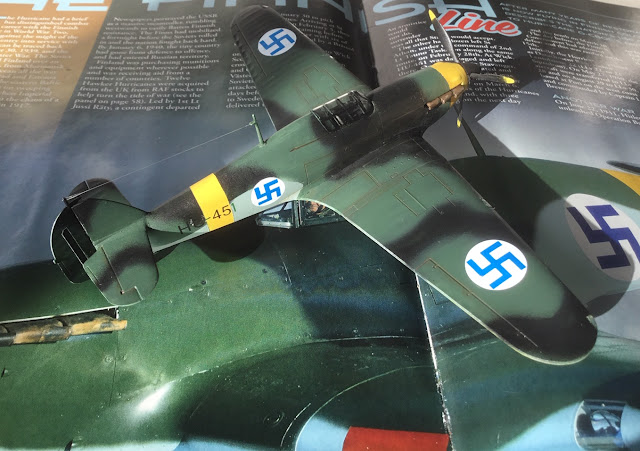 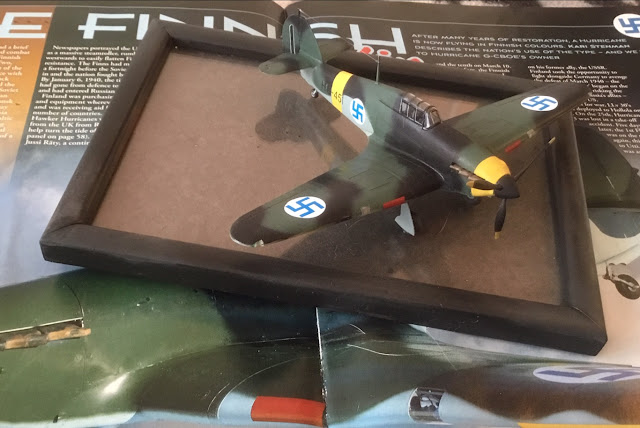 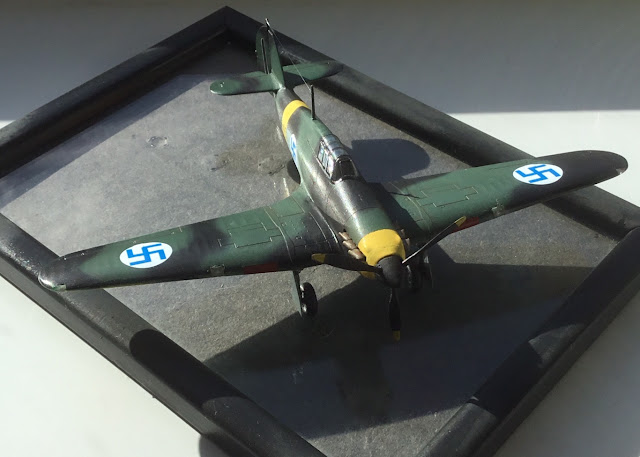 During 2014 a Canadian-built Hurricane II was restored and repainted in temporary Finnish Air Force livery as HC-465, an aircraft originally captured from the Soviets after putting down on a frozen lake after running short of fuel during February 1942. It was the only Mk II that the Finns flew. HC-465 flew the last mission by a Finnish Hurricane on May 31, 1944. The restored Hurricane was registered G-CBOE in the UK. Owner Philip Lawton lived in Finland and displayed the aircraft there. The aircraft returned to the UK after a display season in Finland where there was great interest in the type.. 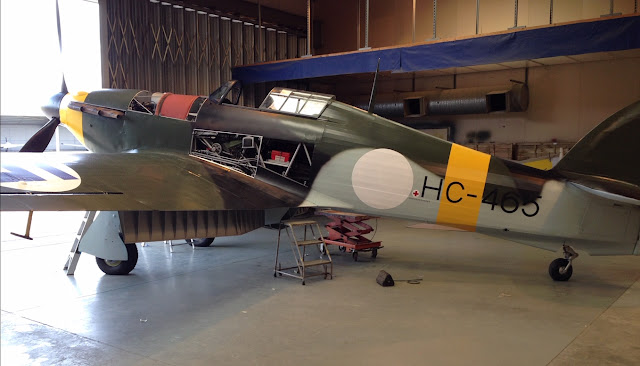 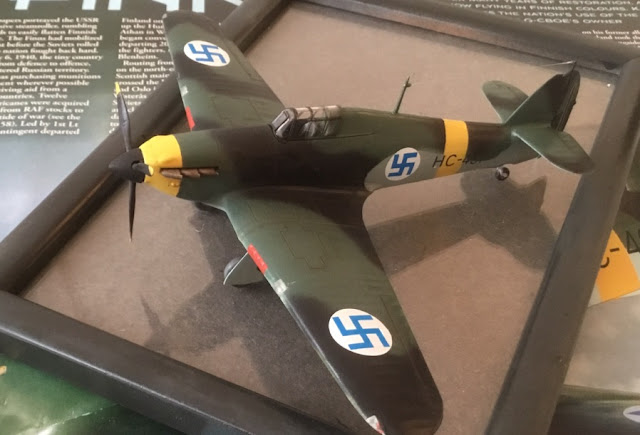 I have to say that I think the Airfix new-tool Mk I looks less like a Hurricane than ever when not in RAF markings. There is something in the shape of this kit that does not quite look 'right' - some have suggested the height of the canopy is over done and that translates into a 'shortened' fuselage. The only view that looks more or less correct is that seen from above as below. However the details are nice - cockpit, undercarriage, wheel wells, exhausts - and this is a big improvement on the 'old-tool' of course. I have still to build my Arma Hobby kit. Perhaps soon. 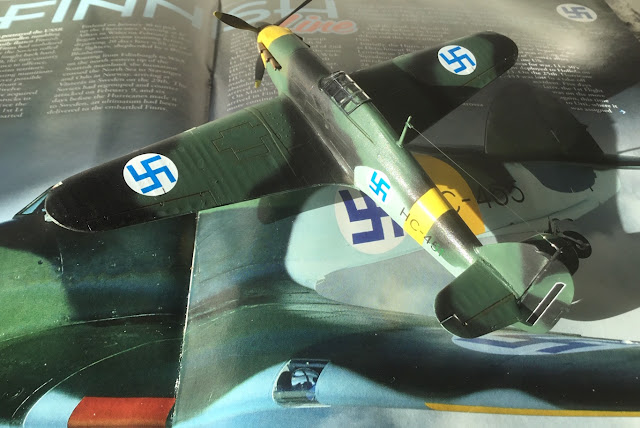 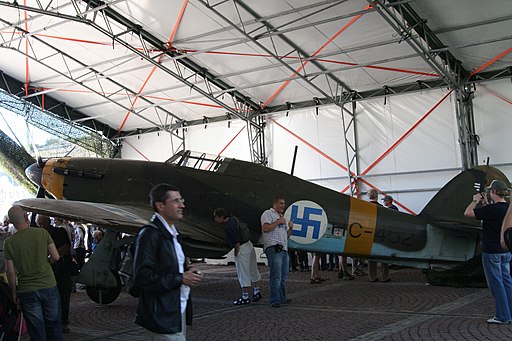 Posted by FalkeEins at 06:53 No comments:

..good day for the stash!


..a good day for the stash.....wandering into my local curios and collectables shop I spotted a couple of rare kits on the shelves... only £15 - a 48th Airfix Buccaneer and Hi-Grade F-4 from Hasegawa with metal parts and etch fret. For some reason there are four metal ejection seats in the Hasegawa F-4 box.. 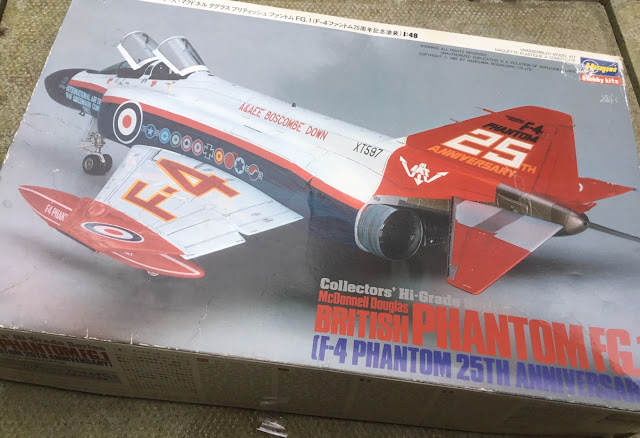 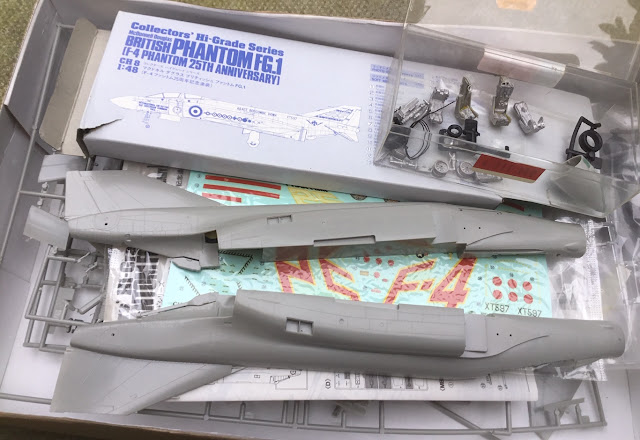 " ...That's a lucky haul and then some! I've had both in my stash for some time now though had to pay (relatively) daft prices by comparison. The Phantom had been on my radar since seeing it as a kid in 1987 (Hasegawa like Tamiya kits were 'waaaaaay' outside my pocket money or even Christmas budget) and I went a little 'wild' when I returned to the hobby in 2011 and discovered eBay. Main problem for me with the Bucc kits has been whether to pull the trigger and put the effort in or wait to see if the Tanmodel kit pans out. Best of luck with the kits!.."  'Nocoolname' on BM 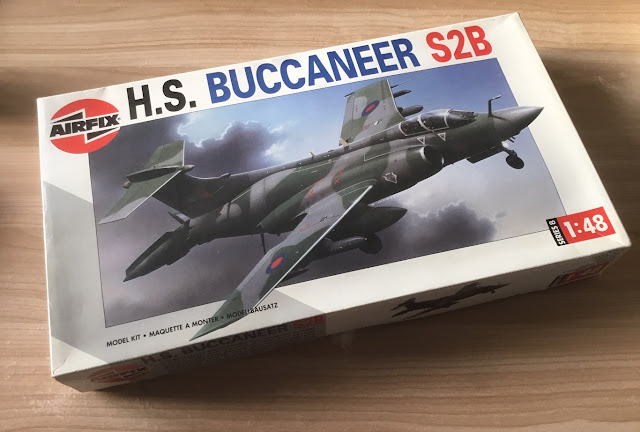 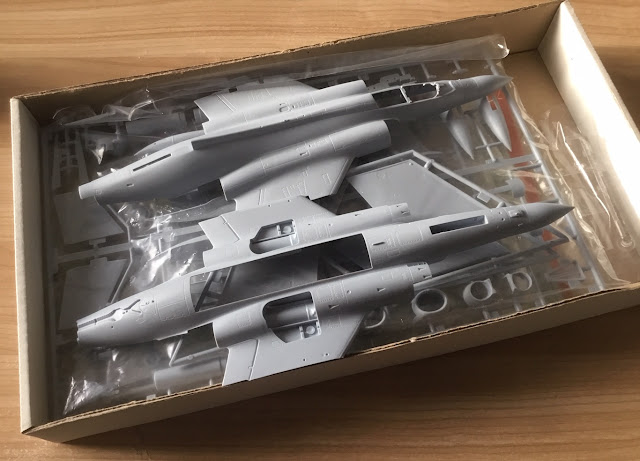 ..and an example built for display currently for sale on ebay 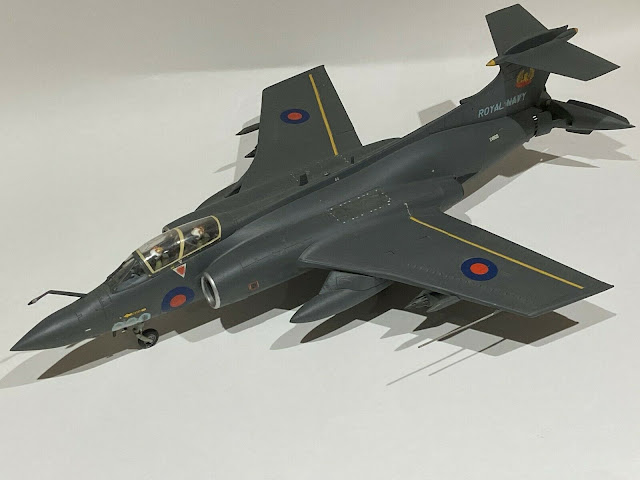 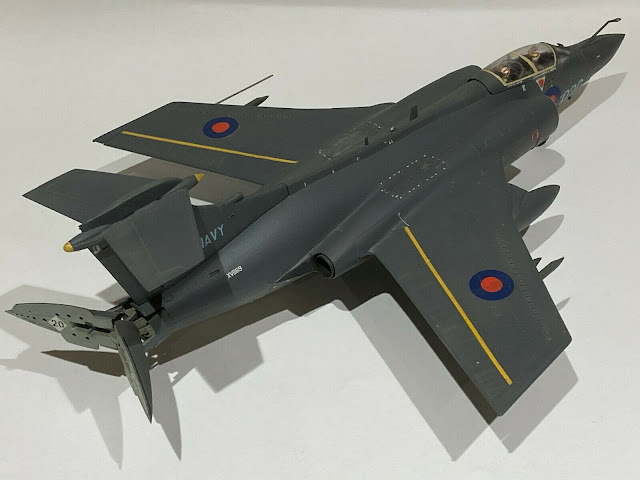 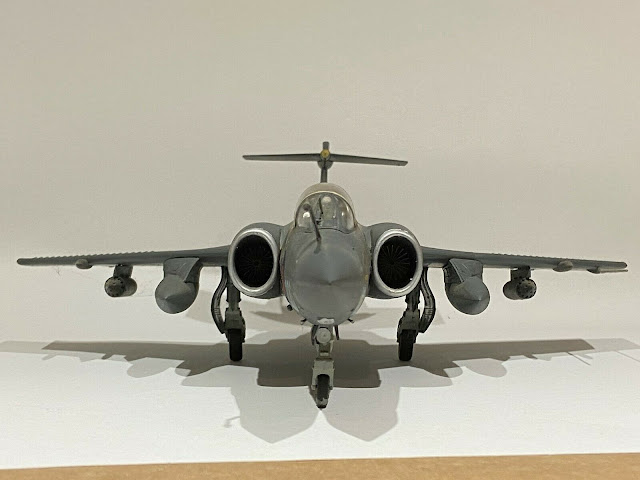 Posted by FalkeEins at 13:14 No comments:

KitKat's latest ad campaign takes the brand's "have a break" tagline to 'innovative new levels', pairing up with kit company Airfix who created a special edition of their new Spitfire XIV. The kits were sent to a number of model-making YouTubers who, upon opening the packaging, discovered a KitKat incorporated in the kits mounted on its own 3D-printed plastic sprue. The KitKat itself comes into play at step 38 of the model-making process, under the instruction "have a break".

Posted by FalkeEins at 13:43 No comments: