How to build the Airfix Swordfish in 72nd scale with NO filler ! - build review (1)

..Was going to write 'new-tool' ..but this kit was released in 2012! Now, one of the (largely unstated) aims of this blog is to build as many of the 'new' Airfix tools as possible and I really should have attempted this one before now. As it happens our club is embarking on a 'Channel Dash' diorama for next year's 80th anniversary so now is as good a time as any. 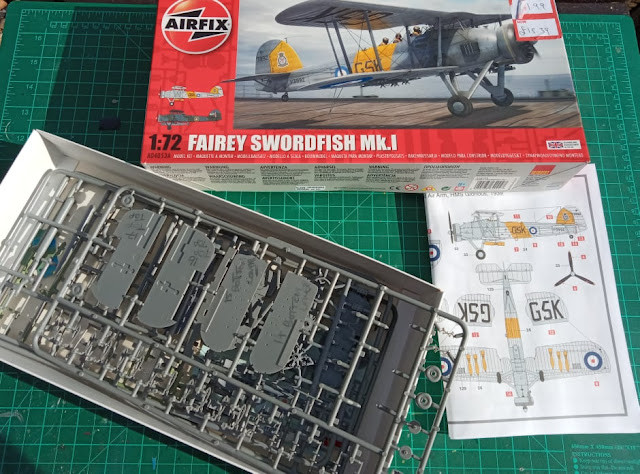 First query - interior colours.
The instructions say the cockpit should be H61 'flesh' - I guess that means varnished wood. Not quite. Interior visible fabric should be dark reddish-brown, " the colour of tautening dope.." according to friend Bob who had a long career as ground crew in the RAF. The flash has somewhat 'lightened' the reddish colour in the shot below. Not much is visible anyway. 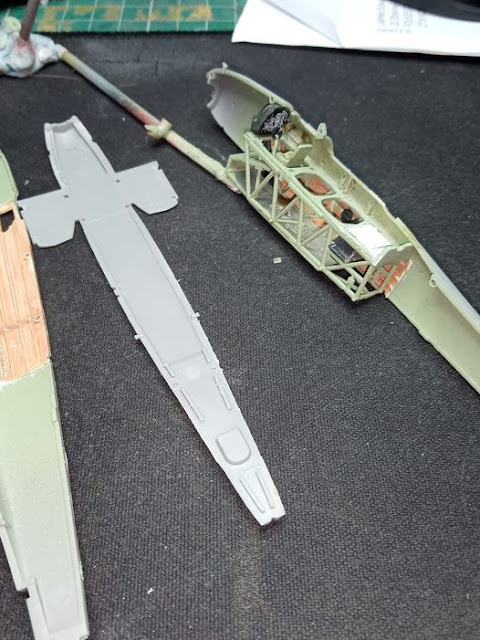 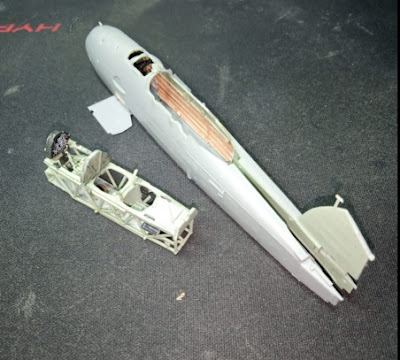 Given that  I always make a mess of the paint finish when rigging, I decided to rig as much as possible prior to painting. This is relatively straight forward for the tail feathers. Note that the rear fuselage machine gun trough section required no filler - unlike most other builds I've seen. The trough part fits into a u shaped slot in the rear bulkhead of the interior framework, but thanks to my method of joining the fuselage halves, there were no gaps! Note clear parts masked off on the lower forward fuselage  -before fitting wing struts as you won't easily be able to access them. 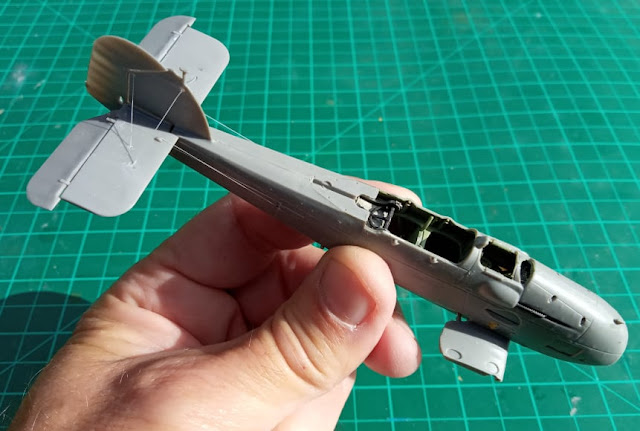 Some other points I've noted.. the fit for the wing 'stubs' is tricky. You need to push hard, but they do go into the small slot. In stage 14 you have to cut out a locating slot in parts 9C and 10C for wings deployed mode - for locating the struts in stage 44 ! ...which I failed to do. My fuselage centre section struts, parts 1B and 2B were 'short shots' making stage 19 particularly difficult! The insert section didn't fit into the upper wing centre section anyway! Part 7A locates into the front of the windscreen for stages 47 and 48. Looks obvious... after its been pointed out! Finally - for now - the support struts for the horizontal stabiliser attach via a unit which inserts beneath the tail. The fit here is poor and will need filling as do the gaps at the front of the fin on the top of the stabiliser, visible in the image below. 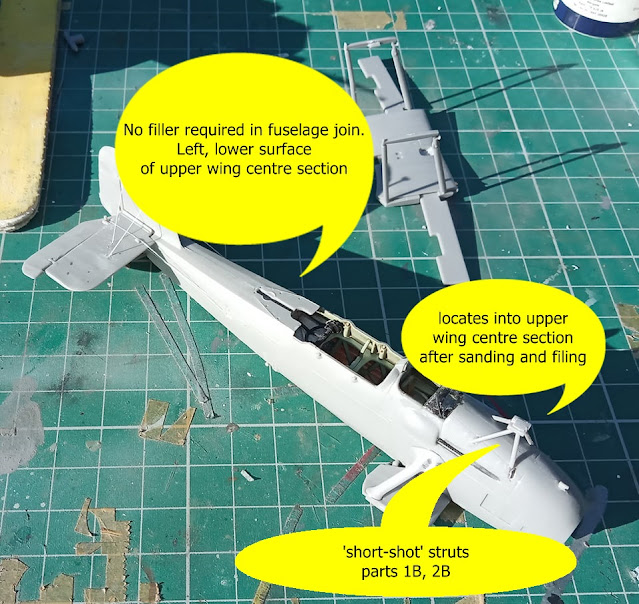 A single click to view a presentation of the superb new-tool Vampire from Airfix
Posted by FalkeEins at 11:27 No comments:

Taking a break from the riveting to work on the base. Top Tip - PVA glue and a few sheets of toilet paper make a great seascape. I'll add more layers tomorrow when it drys out a bit. 👍😜 #battlingBeau pic.twitter.com/ONvGqE8ZaB

Posted by FalkeEins at 09:56 No comments:

Recently finished another 72nd AZ Gustav in the markings of 'White 15' of 1./JG 300 flown by Otto Leisner out of Bonn Hangelar during the summer of 1944 in the 'defence of the Reich'. 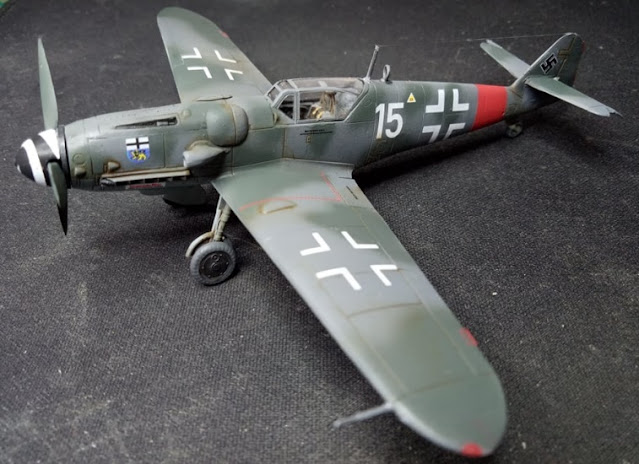 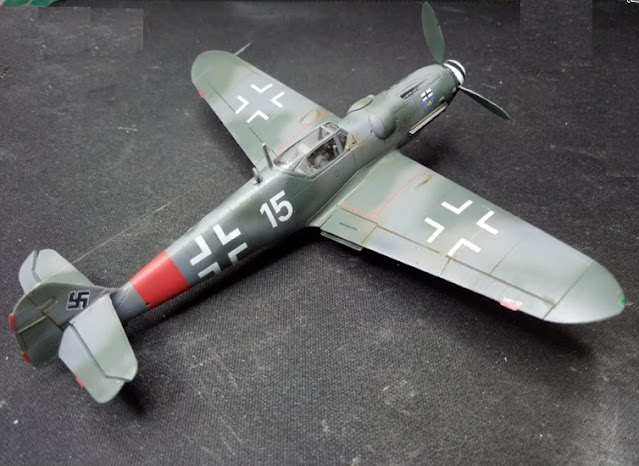 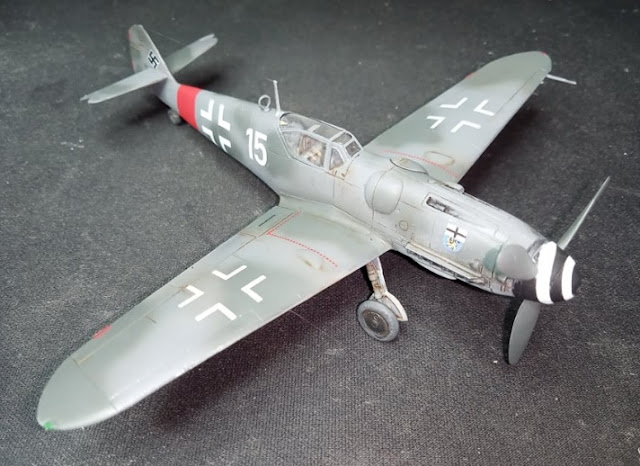 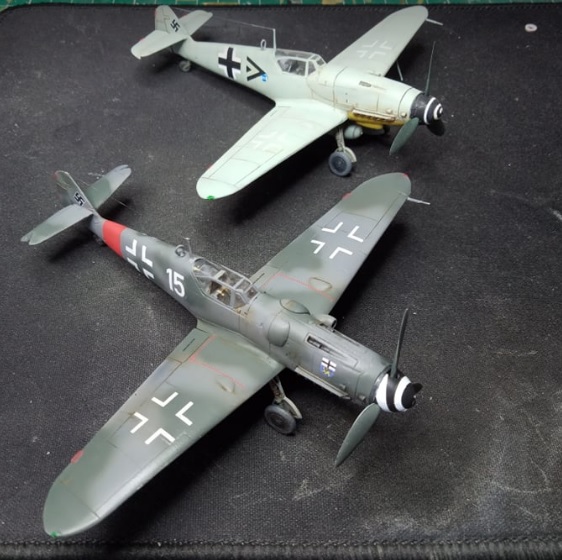 Posted by FalkeEins at 13:27 No comments: