My latest two finishes. Took a week off last week and got, not one, but two, Revell Me 262s done. Mold is looking a bit tired now, the canopy was so poor in one of the kits that I ended up doing a replacement one with a piece of clear plastic and a candle..which was a first for me..
Sinner's machine (Gkr. III./ JG 7)  is finished in the two greens (Xtracolor and WEM enamels) and VI+AF is an early production a/c with nose-wheel scissor link and clear part at the bottom of the rudder... 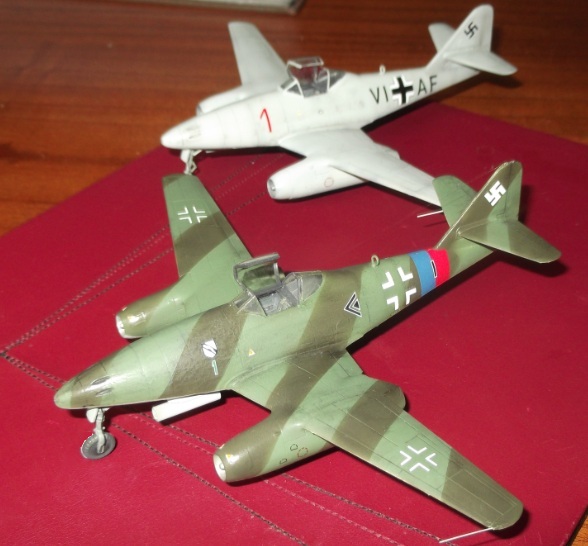 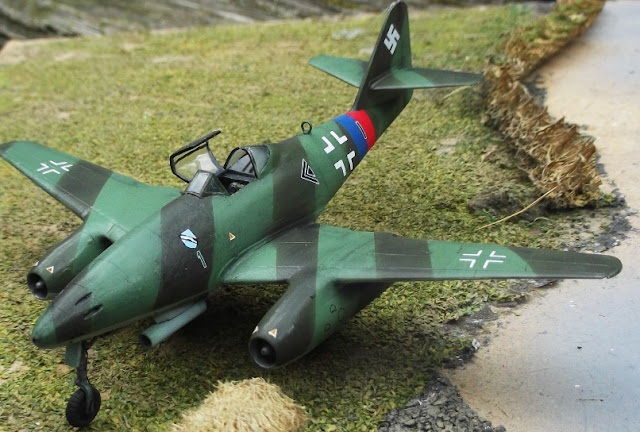 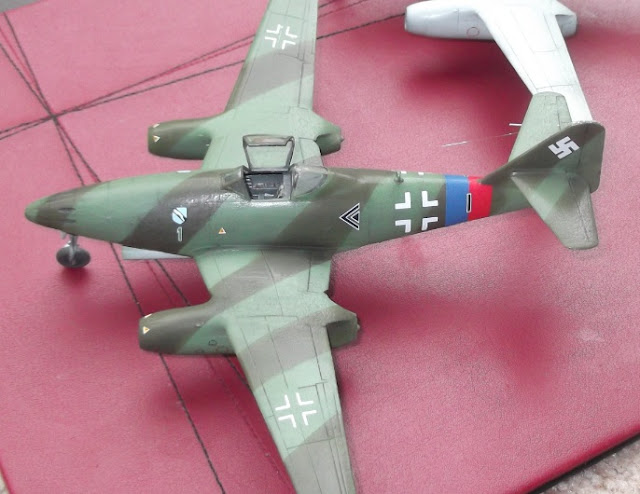 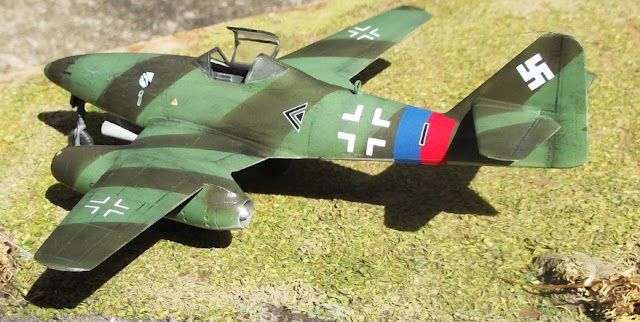 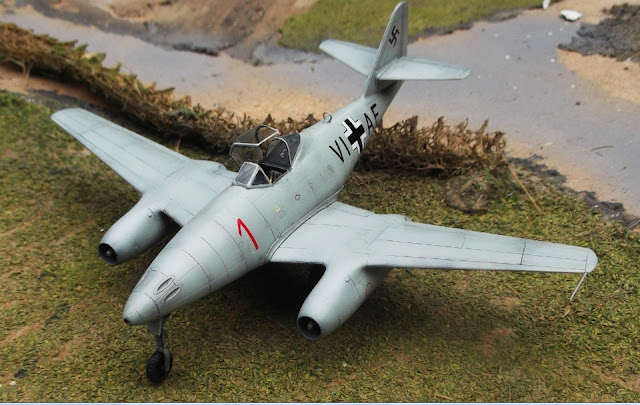 I had started an Academy and Revell dual Me 262 build but put them aside to focus on the Airfix Typhoon. Progress on the Academy Me 262 has been non-existent but I have picked up and started a second Revell Me 262 after encountering a problem with the canopy in the first one. I quite like the Revell 262 but somewhere along the line they've altered the mold, replacing the original three-part canopy and rear decking with a new plastic part and a single-part canopy - which is a terrible fit and on my example had a nasty crack in it, quite apart from being far from transparent. I've since decided to smash-mold a new 'clear' part using a candle and clear plastic food container lid and cut it into three to replicate the 'older' mold of this kit - and decided to finish the second Revell kit at the same time. In these pictures I have attached the windscreen and the rear of the canopy with some 'Glue n' glaze'. The model is painted overall Hellblau as seen on one of the early series production machines 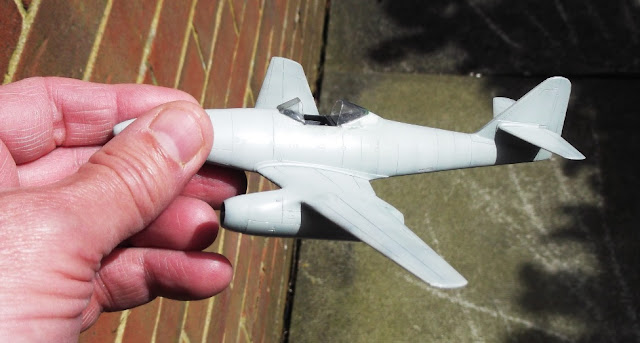 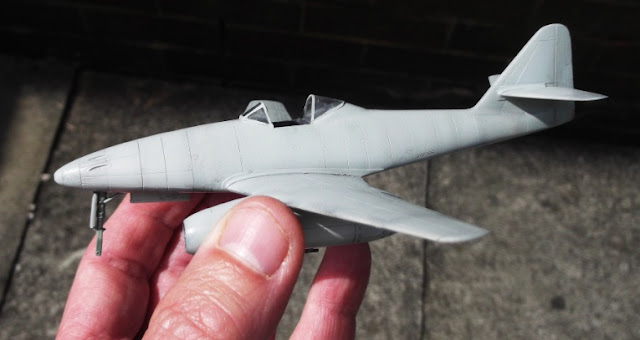 The second kit is now well into the painting stage too - using Xtracolor and WEM Luftwaffe enamels in 82 and 83 this one is being finished as one of the 'striped' machines flown by Maj. Rudolf Sinner of the Stab III./JG 7 'Green 1' (note the German-language caption below states 'Red 1' ) 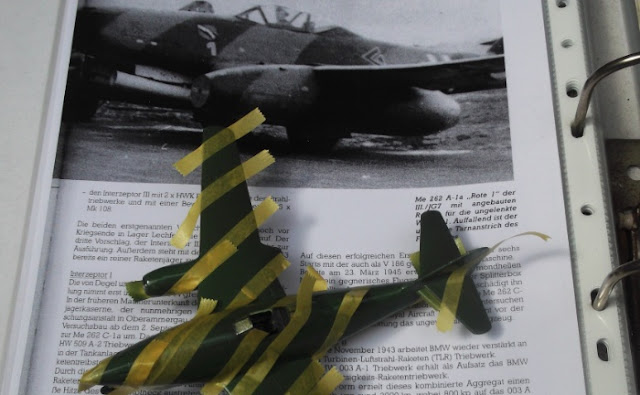 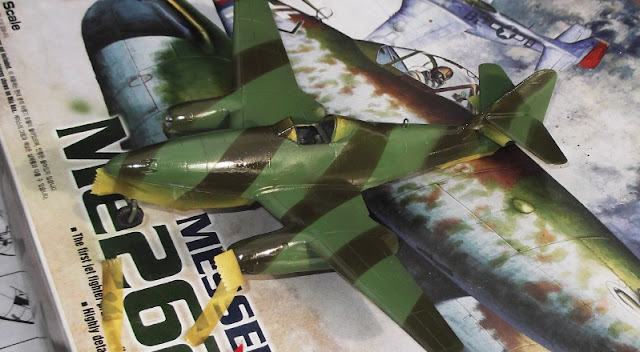 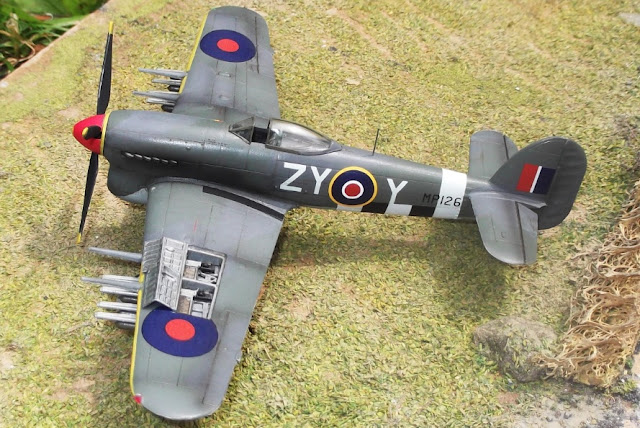 Shame about the post-shading, just a tad on the heavy-handed side and a little too dark for my usual mix. Note the off-set tail-wheel and the electrical connectors added to the rockets from fuse wire. 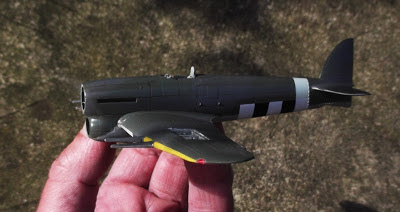 ..a little and often is my modelling philosophy so I was able to make quite a bit of progress this weekend. As usual I had a bit of a nightmare with my upper surface colours, found it impossible to get a decent finish by airbrush - I wasn't about to mask off each colour with blu-tac sausages - so ended up brush-painting the main camo finish. The end result appeared satisfactory to my eyes so I then proceeded to put the fuselage stripes and band on. I had no intention of using the kit decals for these at all, until I read that they were printed by Cartograph so elected to try them on this build - they went on superbly well! I have subsequently washed some of the panel lines with oils and added the undercarriage (note the weighted wheel..) and rocket rails on one side. The spinner was masked off and airbrushed. I have installed the tail wheel - using a short length of biro refill and cutting off the locating pins I have 'posed' the tail wheel in an off-centre position which I think looks quite convincing and adds to the visual impact of the model.. 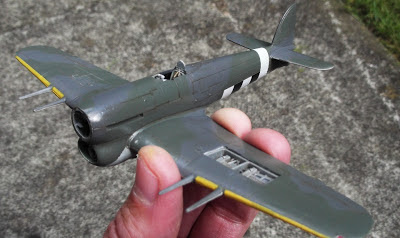 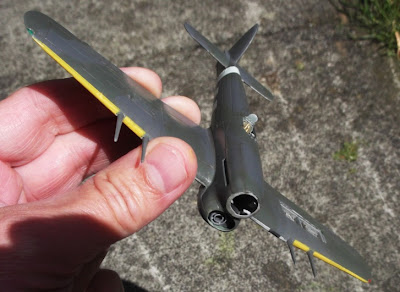 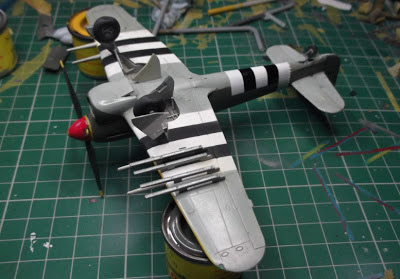