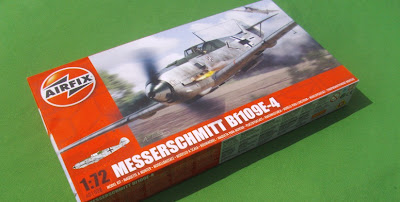 My first two have arrived. What's it like ? - I think I can sum it up in two words - very nice! Brilliant box artwork, general presentation, panel lines, separate flaps etc etc ...there's even a flat on the tail-wheel and a detailed interior including a set of rudder pedals, although no trim wheels or oxygen unit. However the 'engine' appears to be a much better representation than the 1:48th version was - with the supercharger and the ignition leads moulded, although to be honest I think I'd rather have had that extra cockpit detail...  Getting some of the parts off the sprue will be a little awkward, especially the aileron balances. I can see what some might moan about - eg the rather clunky tread detail on the tyres - aside from the fact that there are no Trop/Jabo parts in this boxing and only one canopy and Battle of Britain decal option  (Franz von Werra - ' The one who got away' ), but apart from that this is top notch- and all for less than the price of a packet of cigarettes! I need to get a few done before the Spitfire Mk 22 and the new P-51 arrive ! 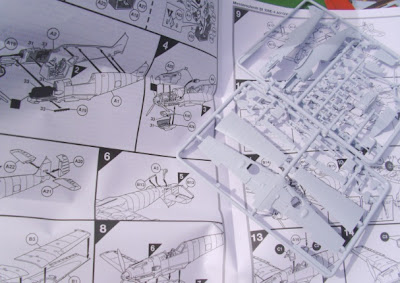 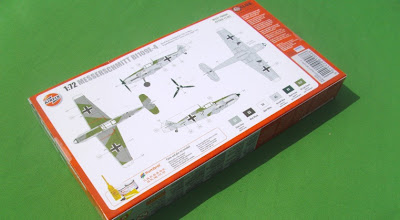 ..this page had nearly 600 views yesterday...  so here are my first two examples under way! I plan on finishing these as JG 54 and JG 52 machines  - two 'famous' Eastern Front Geschwader that participated in the Battle of Britain. The cockpits are adequately detailed for this scale. The two decals provided for the instrument panel are hopelessly over-sized, so the 'instruments' have been cut off the sheet individually. The seat looks nice and the moulded-on belt detail okay so I'm not going to bother with tape/etch. For my third example I'm going to throw a Verlinden etch/resin detail set at the cockpit and do von Werra's crash-landed WNr. 10598 with the hood off. At the moment though I'm struggling to get the fuselage halves together - can't identify the problem - having trimmed back the cockpit, instrument panel and cut off all the locating plugs I'm still going to need a touch of filler! 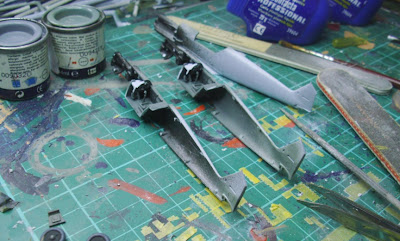 Wings on and a couple of shots to give you an impression of the finesse of this kit's panel lines - very nicely rendered indeed. Again though the fit was slightly compromised by the locating plug/holes, which I've had to remove to avoid a gap at the wing-roots. Note the two 'cut-outs' on the cockpit sill - these correspond to two tiny plugs on the canopy which will provide a bit of strength on the join when posing the folding part of the hood  open. There's a nasty sink mark on the top of the cockpit 'shelf' behind the seat and two on the cockpit floor... 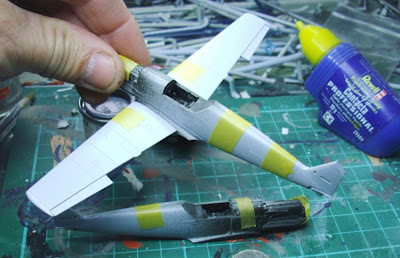 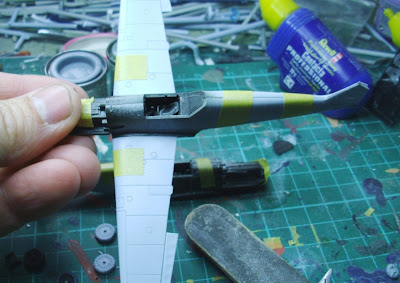 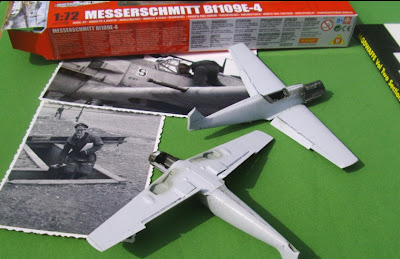 More views of the finished model and comment on the kit here
http://falkeeinsmodel.blogspot.co.uk/2012/05/new-tool-airfix-172-messerschmitt-bf.html 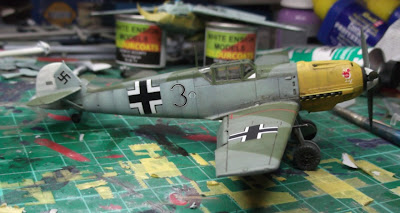 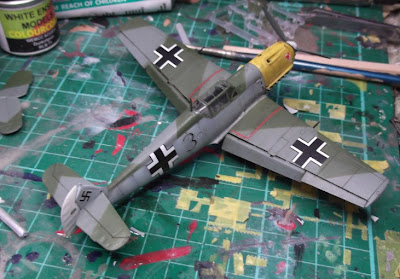