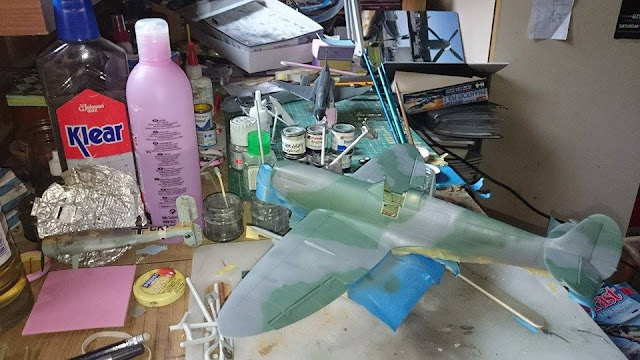 practically two whole days in the paint shop (ie garage..). In the end I didn't bother masking the camo scheme and managed to achieve a reasonably 'hard' edge freehand. Note the blue "Washi" tape used for masking. Covers the big areas and is almost Tamiya tape quality ..but much cheaper. Search for it on amazon. Paints are Humbrol enamels suitably 'faded'.  FWIW there are a number of bulges on the upper wing surfaces that need filing off and sanding down too for a war-time machine. Good progress today with the fuselage band and yellow ID markings sprayed on. Plenty of scope for things to go wrong yet - the gear legs come in two parts for starters and then I'm planning to do my own decals ! 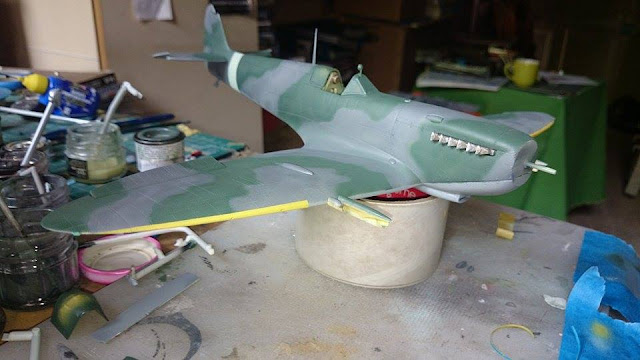 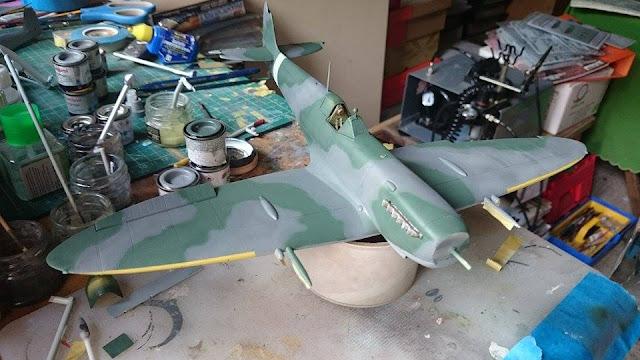 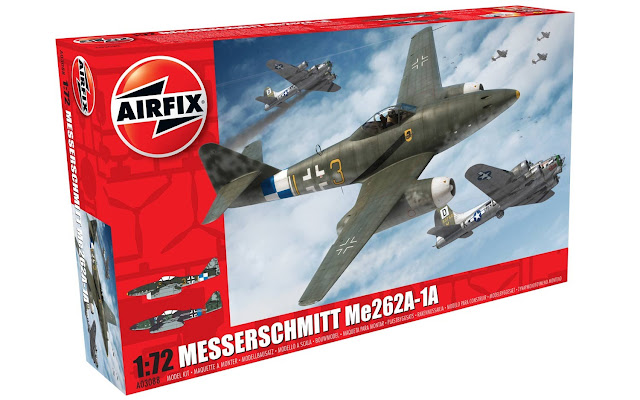 As a few have pointed out on our favourite modelling forum there is still no sign of the new-tool Airfix Me 262 in 72nd scale. Should have been here by now. Airfix are though still taking pre-orders on the website. It looks like it will be a nice kit although I've read one or two gripes about the apparent lack of options such as slats and flaps. I'm sure there will be lots of aftermarket; flaps, vac canopy, resin engines, wheels and so on. And just in time too. The Revell Me 262 is getting very long in the tooth nowadays - the last one I built I had to smash-mold a new canopy. The Academy 262 tooling was also first released way back - in 2007 to be exact! It is reasonably detailed but as with a number of Academy WWII kits the basic outline shapes are a bit off; the fuselage is rather fat and wide with an overly bulbous nose. The Academy glazing is, for example, far too wide for the Revell kit. The canopy in the last Revell 262 I attempted was un-useable but it can't be replaced with an Academy canopy (which also happens to be a tad 'flattened-out' at the top..). We certainly have no lack of aftermarket decal options for the 262 already! 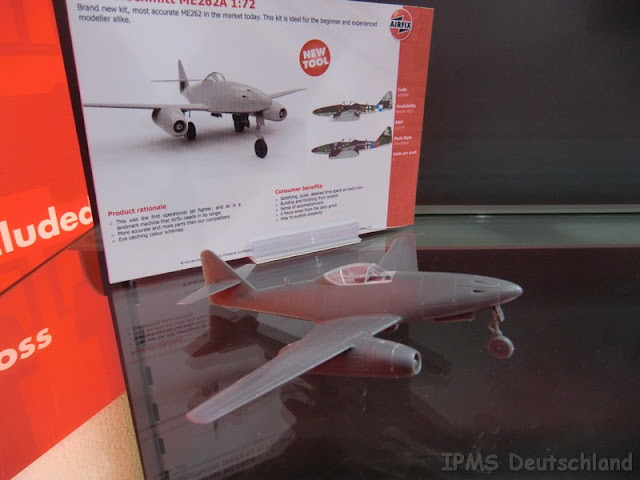 As far as the discussion about 'poseable' slats is concerned, see below - the 'famous' Transit films 262 walkaround sequence in the 'Wings of the Luftwaffe' video series clearly shows that the slats are deployed on the ground. They can be pushed in and pulled out - and could be left out. Whether this was because they had a tendency to stick or not I don't know.  The sequence goes on to show the technician working on the inboard slats, pushing them in and then letting them slide back out... 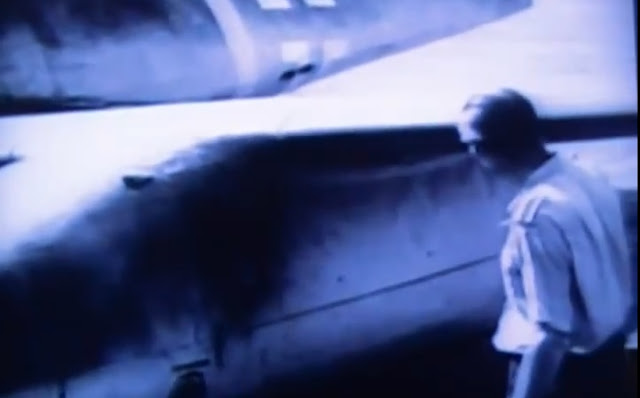 Note that the Me 262's slats are not 'sprung' or have any actuators - they simply slide in and out on rails. In the clip below the technician is pulling them out and pushing them in - whereupon they 'slide' open of their own accord. Once landed and parked-up good practice says they should be closed up before leaving the aircraft for any length of time. You really don't want anything getting into the gap or into the mechanism. Checking the freedom of movement of free-floating slats as they open and close is part of good pre- and post-flight inspection on types thus equipped. Other points to consider;  because the Me-262 has a tricycle undercarriage the wing is more horizontal to the ground compared to, say, the Bf 109, so that it is more likely that gravity will cause the Me 262's slats to drop out on their rails. You're less likely to see this on a Bf-109 because gravity will be acting with the coefficient of friction to keep them in. And they could be locked in.

So if you have a man in a black overall walking around your 262 model it would be entirely reasonable to have the slats open on one side and closed on the other. In other words when modelling the Me 262 wing slats could be deployed in any manner you see fit. Note though that in the air aerodynamic forces keep the slats in and they will deploy as the airflow is not sufficient to keep them in and the wing is losing lift. See this discussion here on britmodeller.com 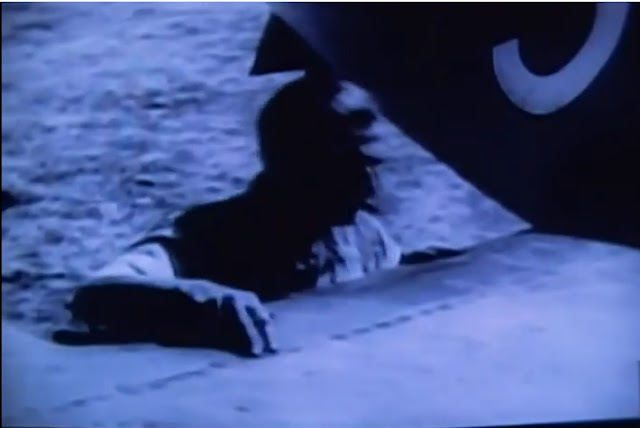 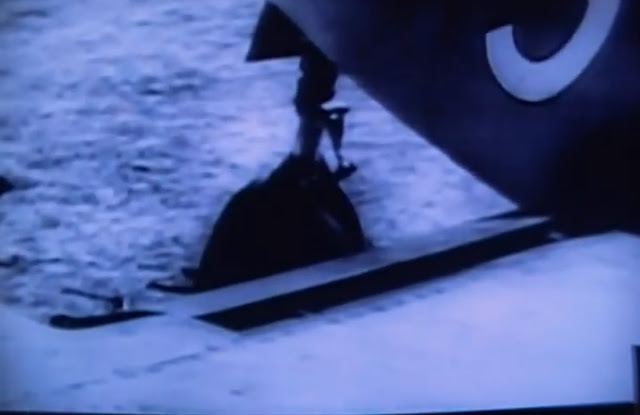 Posted by FalkeEins at 02:55 No comments:

we have had a bit of a torrid time here in the UK with a week of +30 C temps in Kent - far too hot for modelling. Fortunately we are close to the sea so the breeze has helped a little, but even that got hot! Not much progress on the Spitfire, but at least it has some paint on it. The first 32nd build on this blog ..and to be honest it is hard work - every flaw, whether mine or the kit's - magnified. Picked up a cheap copy of Brendon Deere's beautiful book 'Spitfire - return to flight' at the Kent Battle of Britain museum in Hawkinge, so now thinking of finishing the model in the colours of Al Deere's PV 270 and doing my own painted-on markings, especially as the kit decals are so poor. (the codes are green!). We'll see.. 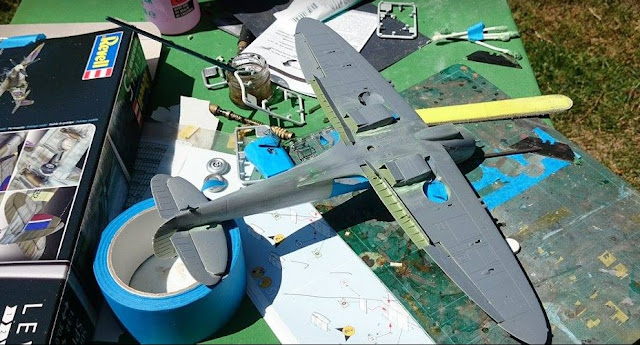 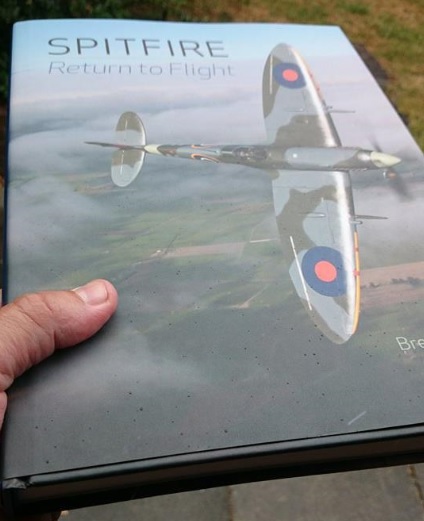 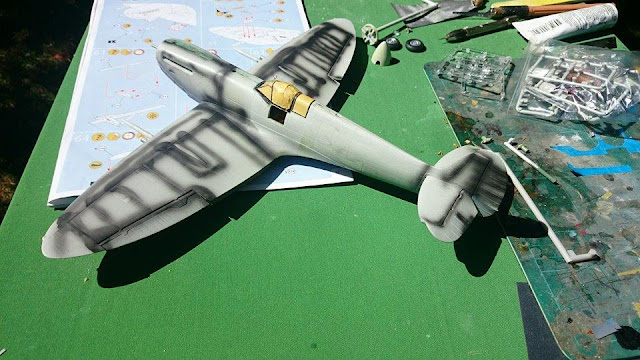 Posted by FalkeEins at 05:44 No comments: 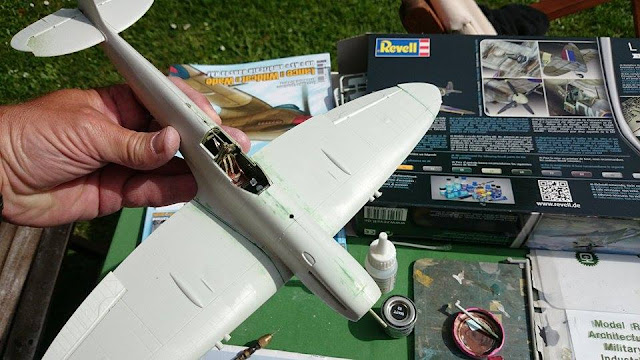 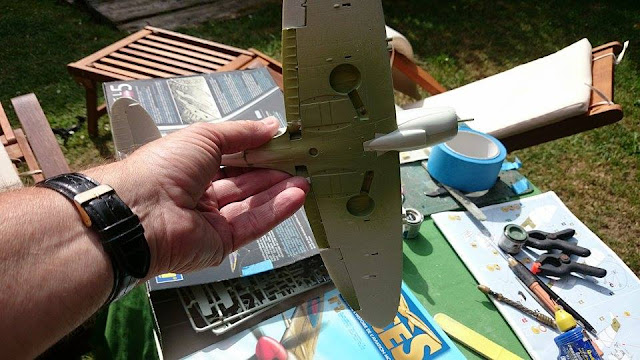 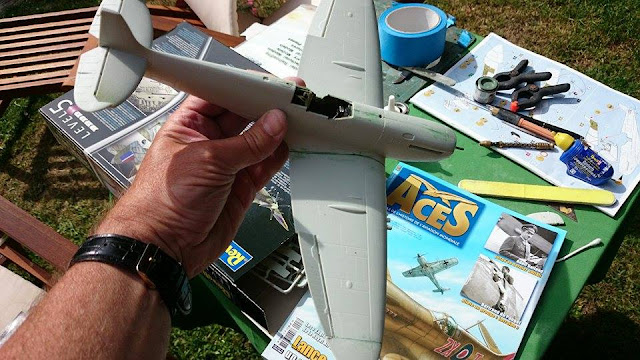 Go here to see the finished model
Posted by FalkeEins at 12:24 No comments: