Finished my second Defiant of the year, this time in the day fighter scheme of 264 Squadron, Martlesham Heath, Suffolk, at the start of the Battle of Britain 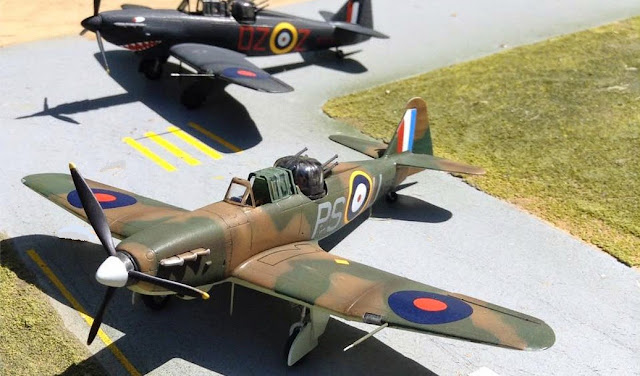 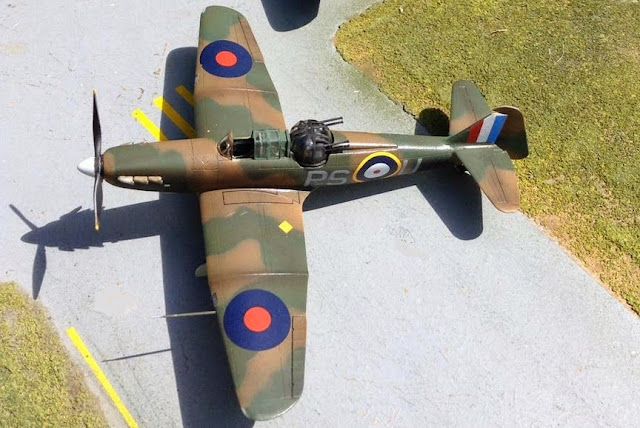 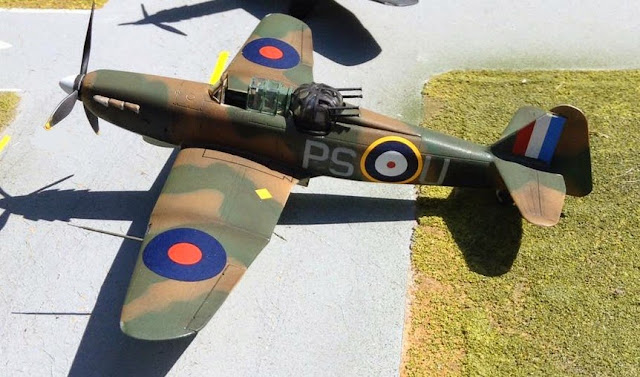 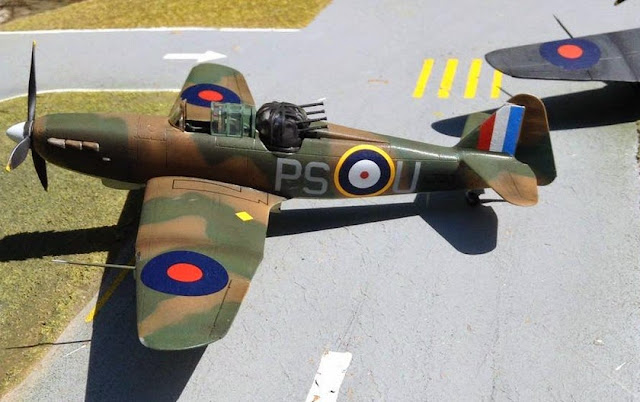 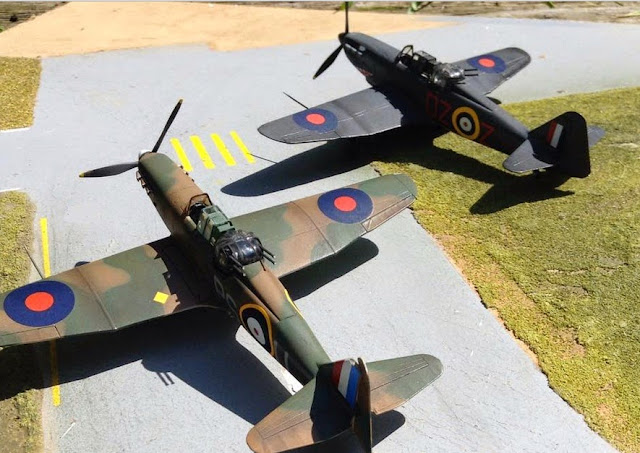 Below; Images from the IWM's collection of 264 Sqd Defiants are free to re-use on non commercial sites with the IWM's embed code 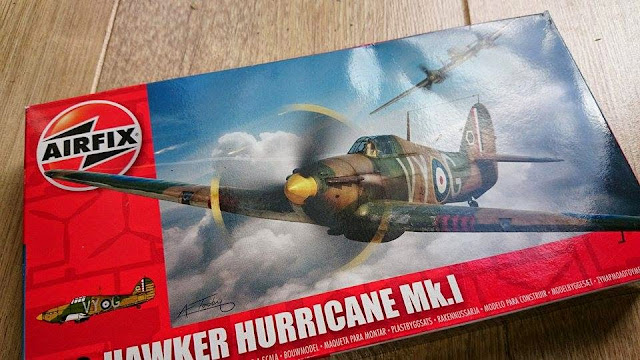 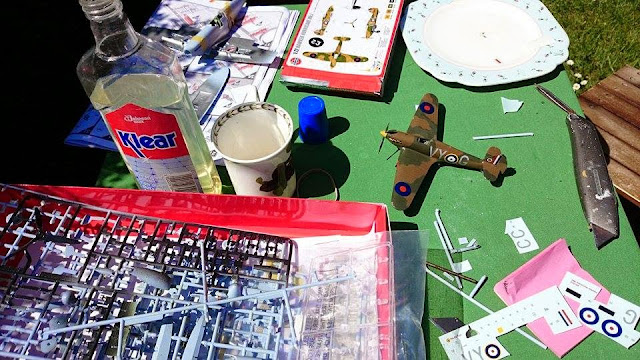 Putting the finishing touches to another small scale Airfix Hurricane Mk I, this time the 85 Sqd boxing. What a nice kit and great decals. Recommended references for these early Hurricanes are the two monographs recently produced by Lela Presse in their 'Air Battles' series entitled 'Hurricanes on the Continent'.. 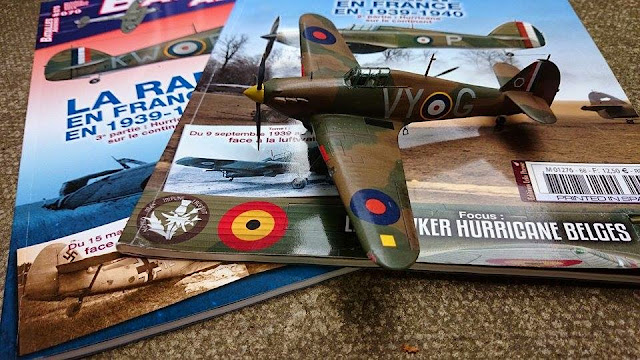 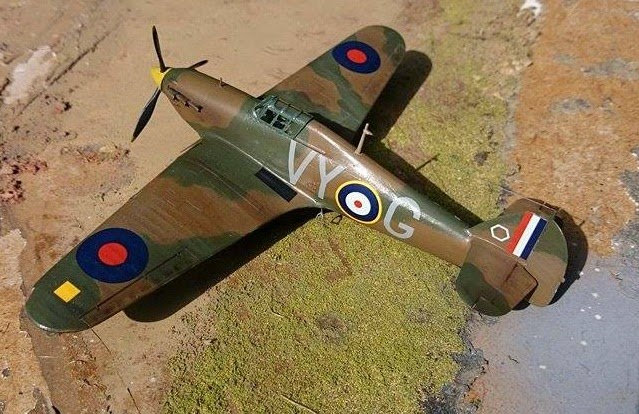 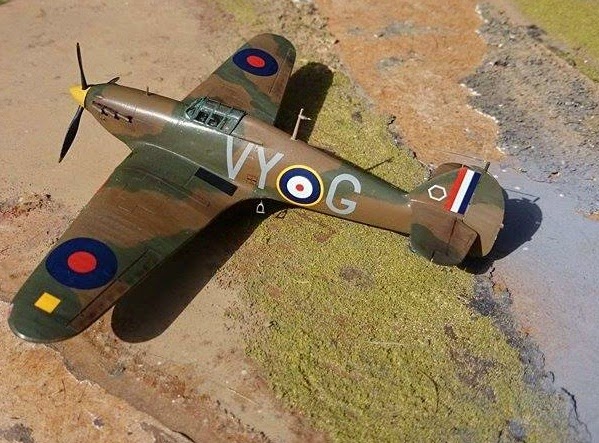 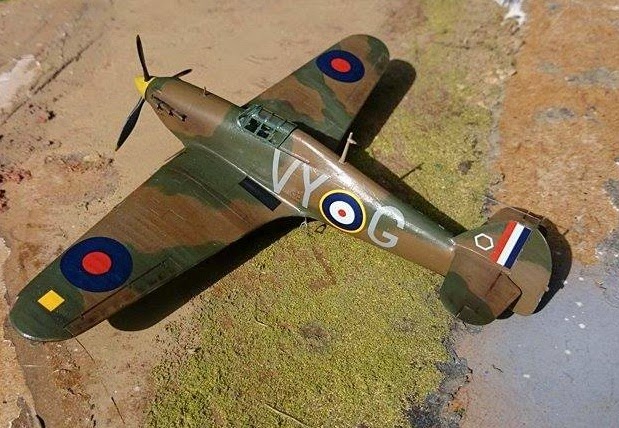 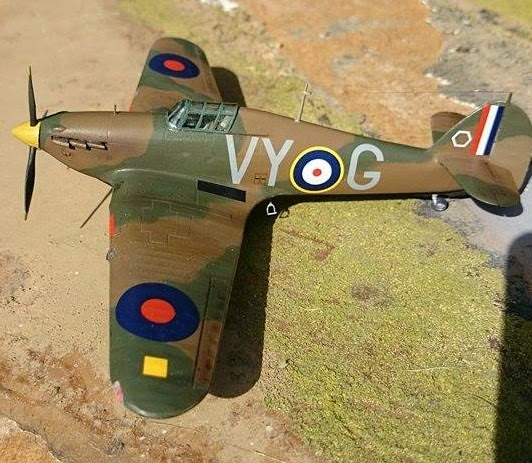 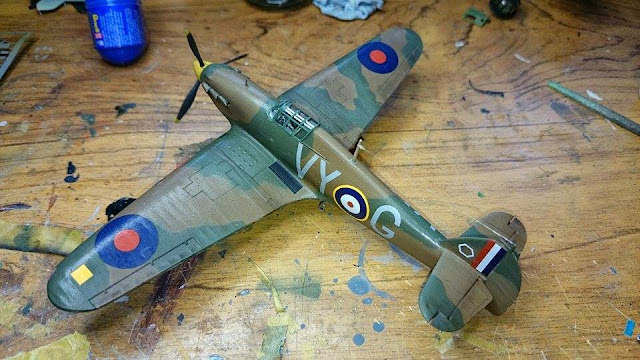 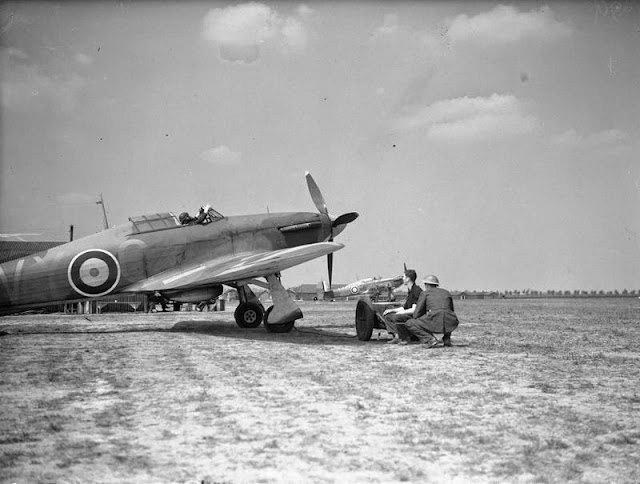 Note the use of the use of the Squadron "hexagon" marking on the fin, even though the fin flash is now in use and the gas patch ouboard of the wing roundel usually applied closer to the cockpit. Of interest as well is the light-toned spinner.. 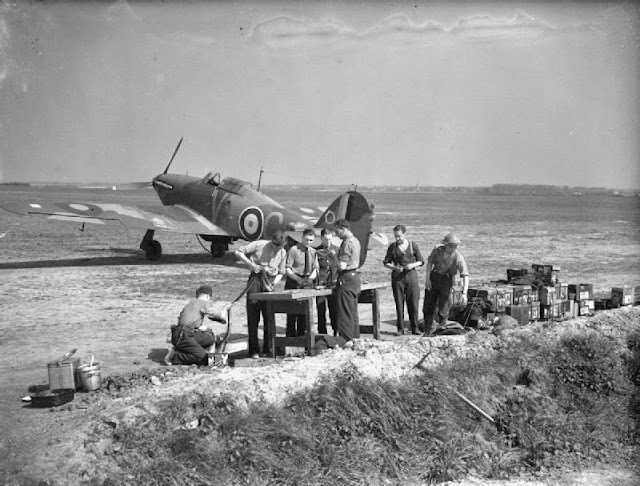 Albert Lewis's Hurricane, also 85 Sqdn, showing the outboard gas patch on both wings, but no sign of a hexagon on this or other pics from the series. The fin had the broad red stripe 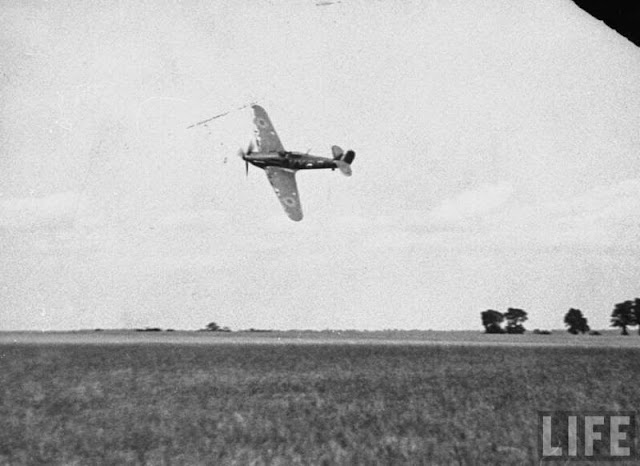 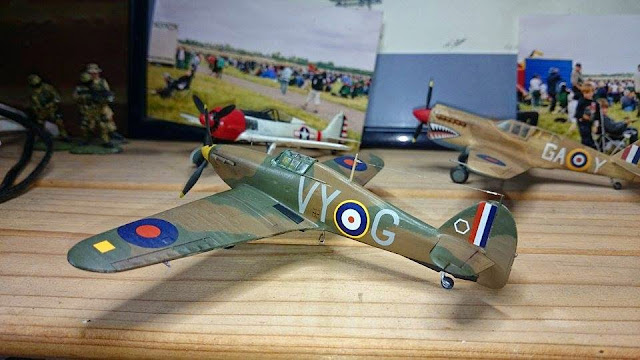 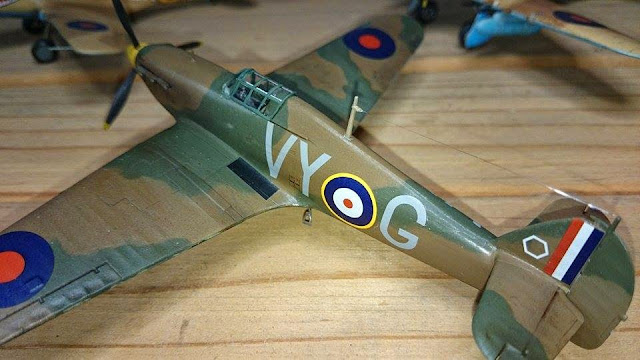 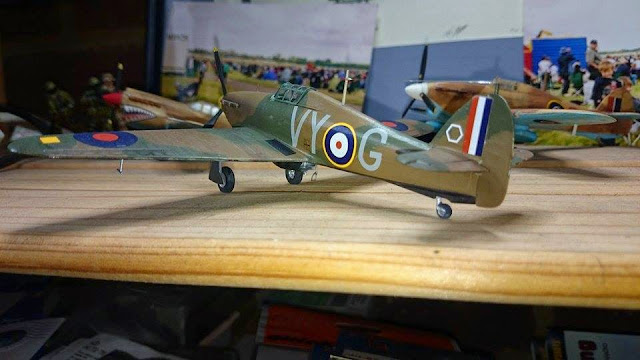 Posted by FalkeEins at 02:41 No comments:


Up from Hornchurch on 28 May 1940, 54 Sqd's Al Deere attacked a Dornier over Dunkirk and had to belly land at Dunkirk/De Panne. His 'Kiwi' N3180 KL-B was his first of three Kiwi's. KL-B was crash-landed on the beaches after taking hits from return fire. The aircraft subsequently burnt out after Deere made his emergency landing.. 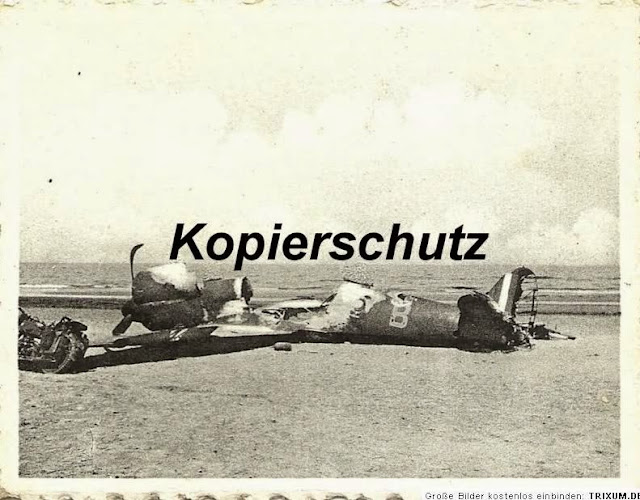 This particular airframe is covered by the Southern Expo decal sheet (see below). Note they go with black and white undersides, no roundels. No rear fuselage serial on the aircraft I modelled.. 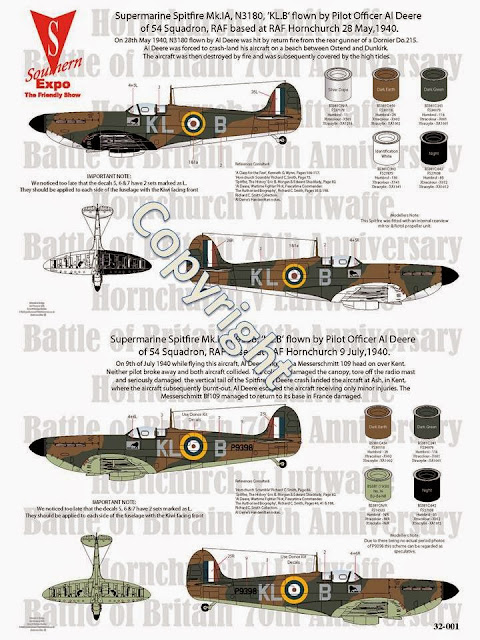 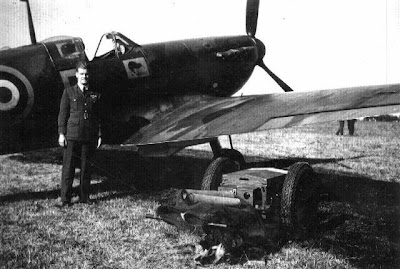 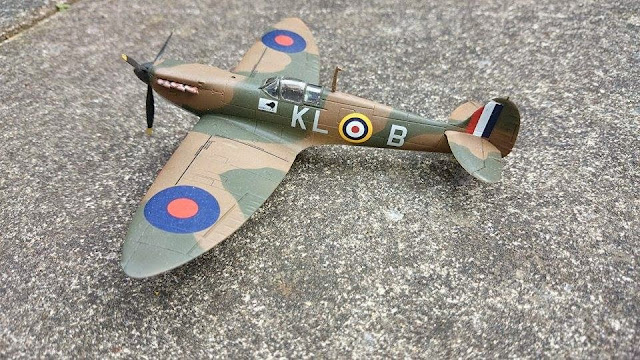 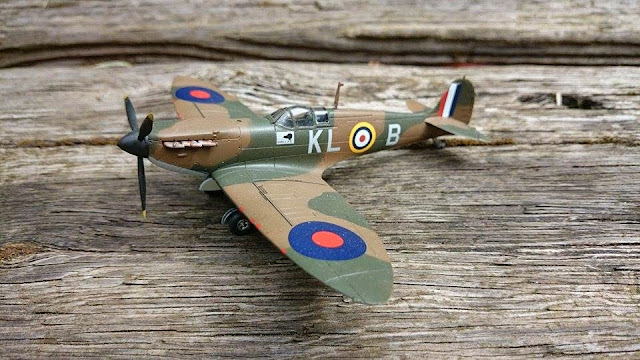 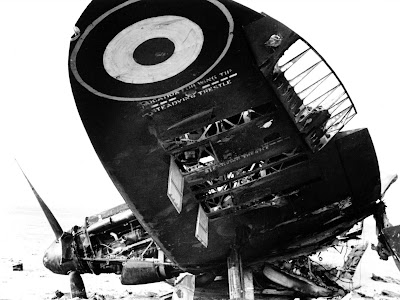 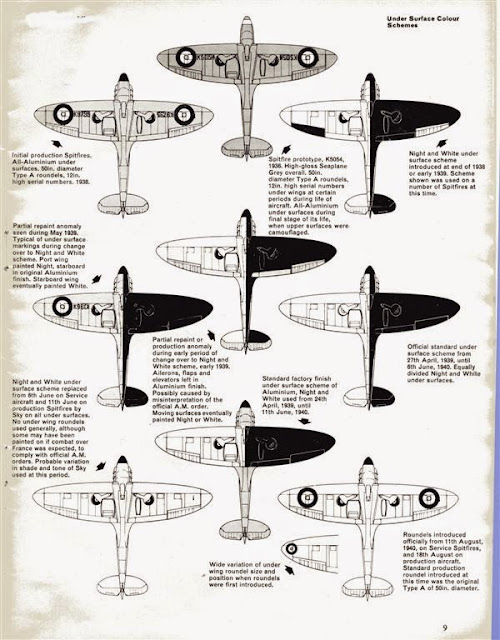 a description via Edgar Brooks of the evolution of early Spitfire camo and markings..

"..The May 1st., 1940 order was for yellow circles to be added to the fuselage roundels, not underneath. On May 11th., repeated on the 15th., an order was issued for underwing roundels to be painted (without any yellow.) On June 2nd., an order was issued to paint the undersides all Sky, with underwing roundels being thereby completely painted out. On June 12th., a signal stated that, due to a shortage of Sky, the black/white scheme might still be seen, and the roundel under the black port wing was to have a yellow ring added, which must not encroach onto the ailerons or hinges. On June 14th., units (including the Civilian Repair Organisation) were told that the black/white scheme could be overpainted by a maximum of two coats of Sky, but (due to balance considerations, which units were not equipped to deal with) that did not include ailerons, which should have the original paint washed off before application of Sky. On August 11th., apparently due to some units having painted them anyway, an order gave tacit approval for underwing roundels to reappear.."

Thanks to Troy Smith. Much more on his britmodeller thread here
Posted by FalkeEins at 09:33 1 comment: