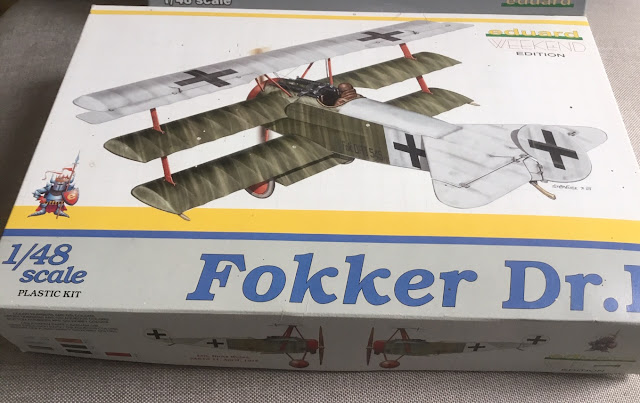 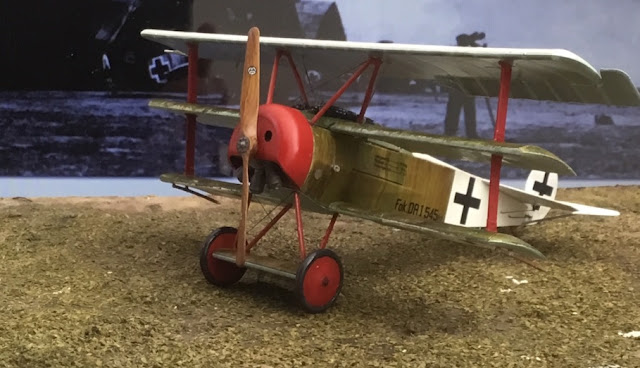 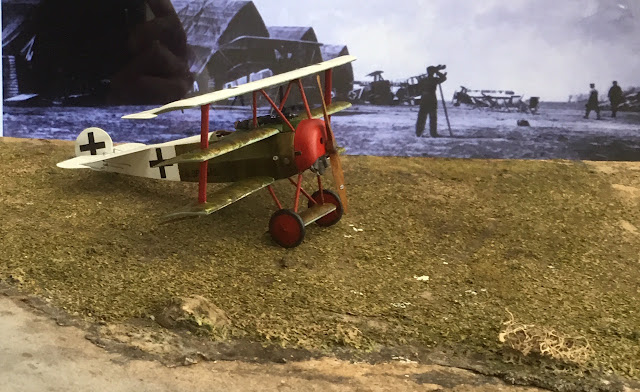 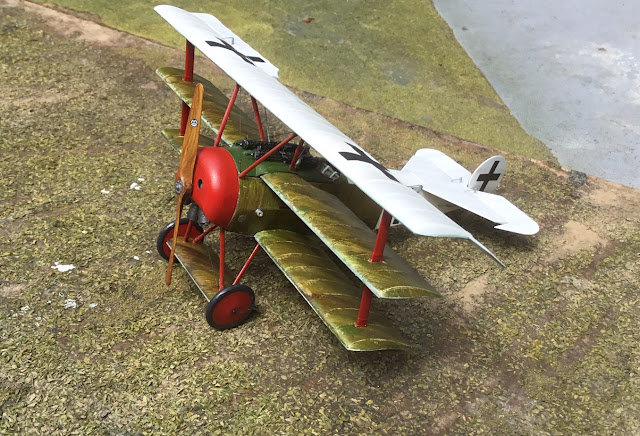 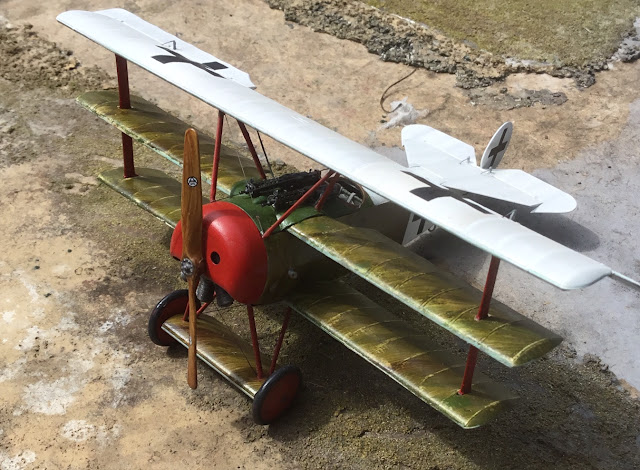 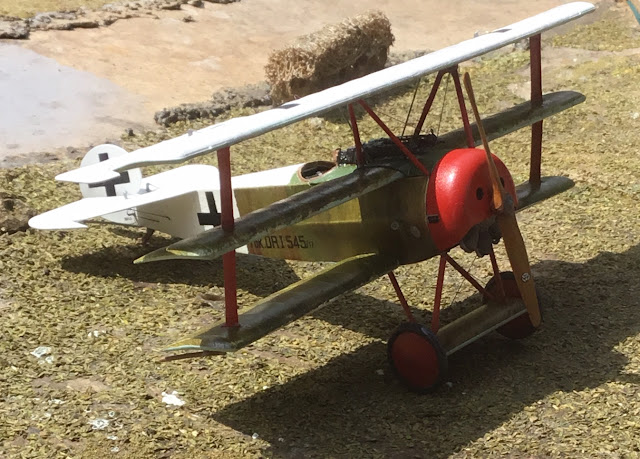 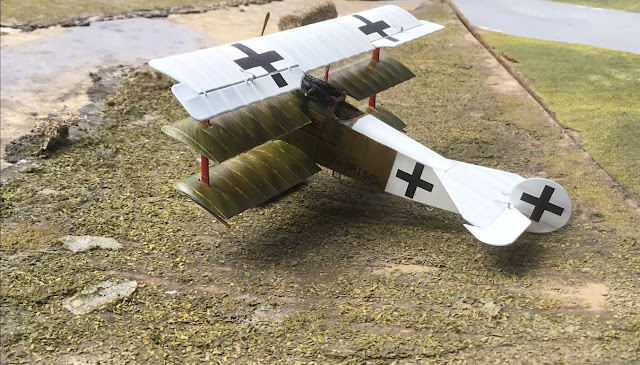 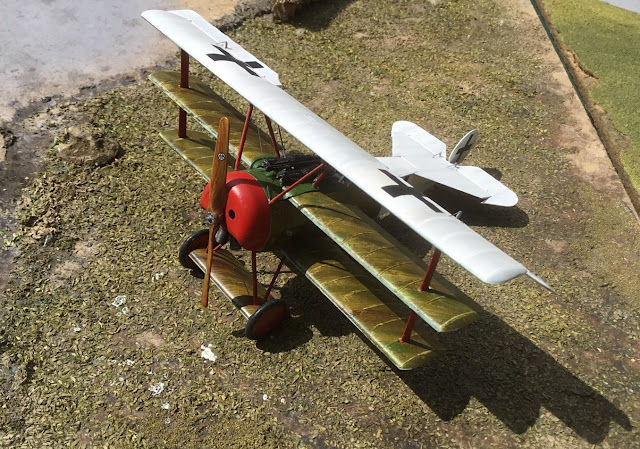 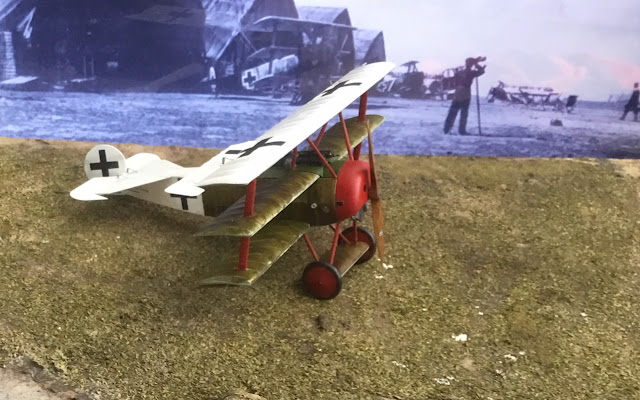 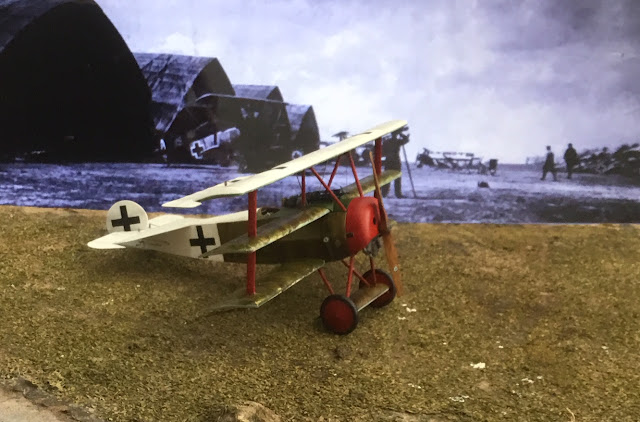 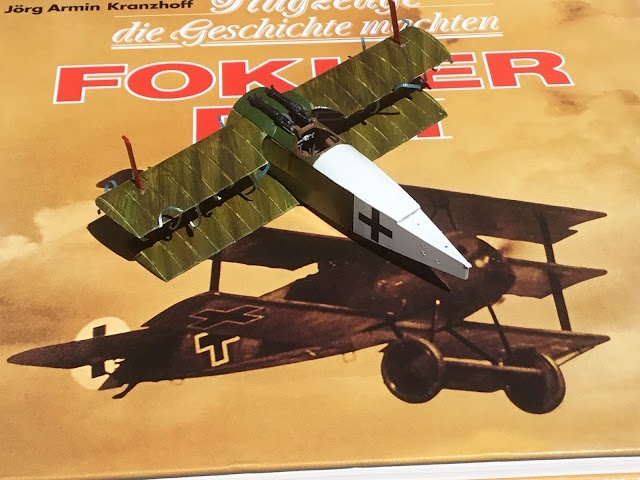 Putting the wings on the Fokker - I haven't seen many builds of the Eduard DR. 1 - apart from perhaps Stephen T. Lawson's on aeroscale - but those that do exist all state that the kit assembles well. I found the struts a little difficult to fit through the centre wing, managing to snap one completely. Superglue has definitely been my friend on this build. Both cabane struts broke as well needless to say and fixing those was tricky, but the top wing was eventually attached securely without too much damage. 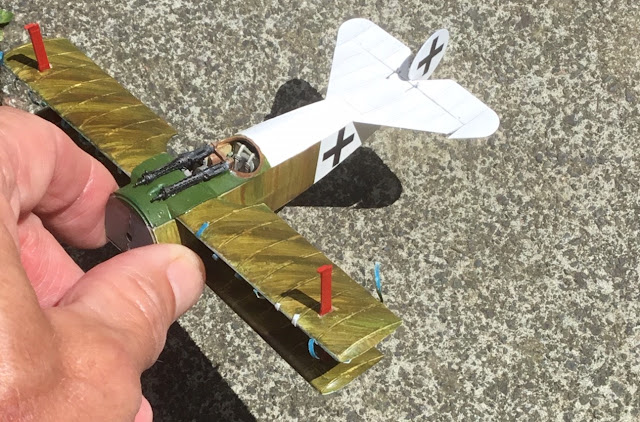 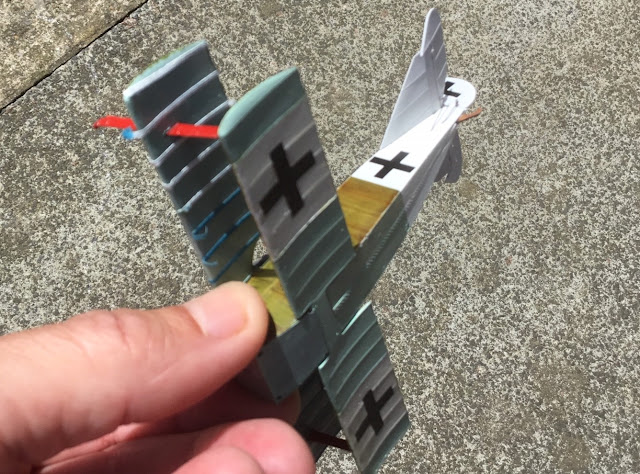 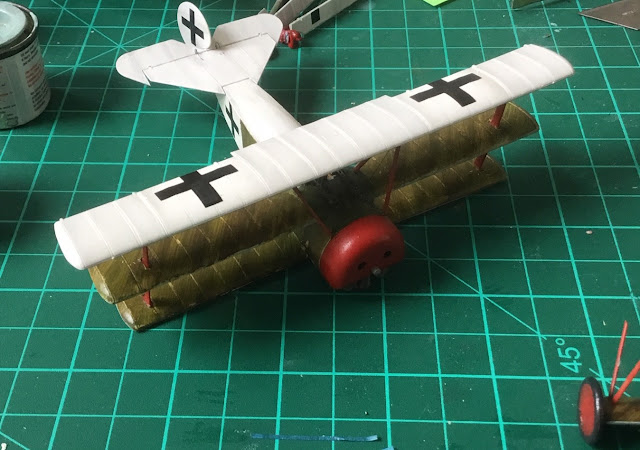 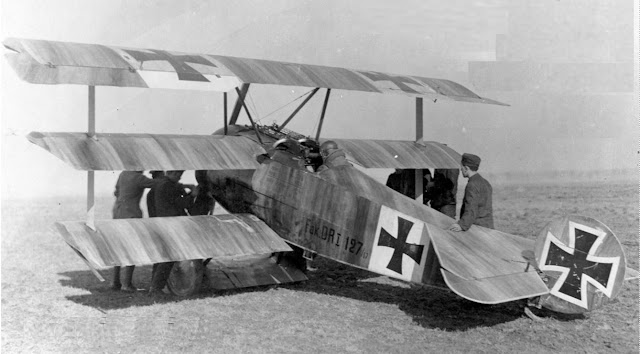 Fokker's Dreidekker (Dr.) 1 is another of those hopelessly over-rated German technological achievements, the Triplane being arguably one of the biggest aeronautical developmental cul-de-sacs in the history of flight. Promoted by no less an airman than the Rittmeister von Richthofen himself - a cold-blooded 'killer' who actually took little pleasure in flying and who forbade his pilots from any sort of 'stunting' - the type had the briefest of combat careers during the first half of 1918 and acquired a notoriety way beyond its limited capabilities. Quite simply three wings were terribly inefficient, the engine technology available to Fokker was unreliable, build quality and control in his factory was negligent and the type was soon out-performed in most areas by comparable Allied types. The Dr.1 was quickly superseded by Fokker's own D.VII but not before a number of German 'celebrity' aces had lost their lives in the type - either brought down at the hands of Allied aces, killed by 'fluke' rounds from supposed 'ground fire' or crashing as a result of defective workmanship.. Fokker of course was a Dutch national who made a lot of money from the German war effort during 1914-18. In Kranzhoff's excellent book on the Dr. I in the Motorbuch Verlag series "Flugzeuge die Geschichte machten" ('Aircraft that made history') you can read how he misappropriated the interrupter gear technology from a 1914 German patent - there was a court case - and then jealously guarded the monopoly of this technology from other German manufacturers, quickly making his first million. Dubbed the 'flying machine gun'  ('das fliegendes Maschinengewehr') the Dr. 1 was no 'miracle weapon' and was built in only modest numbers. Notable Dr. 1 pilots -aside from Voss, Richthofen etc - did however go on to assume leading roles in the post-1933 Luftwaffe including of course Göring (Reichsluftfahrtminister), Udet (Generalluftzeugmeister), Bodenschatz and Blume.  Dr. 1 pilot and Jasta 34 CO Robert Ritter von Greim eventually became Göring's successor at the head of the Luftwaffe, while Fokker's Waffenspezialist Heinrich Lübbe went on to found Arado appointing former Dr. 1 pilot von Schoenebeck as Chefpilot...

Having said all that I quite like triplanes and would love to have a colourful line-up on the shelf.  A modelling cliché - or so I read on a forum recently - but a nicely done display of Richthofen's machines might look quite impressive I reckon. Of course I failed to take into account the amount of colour 'research' required. Think WW II Luftwaffe colours is a bit of a minefield? Try reading up on triplane colours! Happily Greg vanWyngarden has published a certain amount of reliable material for Osprey which is easily available - although WW I stuff doesn't sell too well apparently.

Recently I started an Eduard 'weekend edition' of their nice 48th scale Dr. I kit and also opened the Revell boxing of the same plastic. Four or five weekends later I'm still hard at work on the kit(s). My incompetence, no fault of Eduard's I hasten to add. 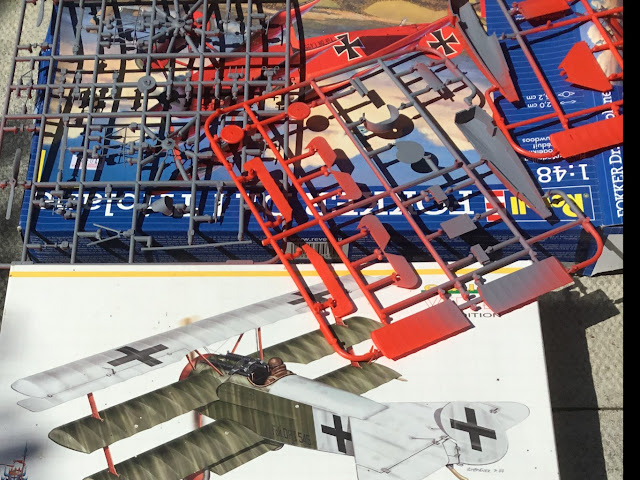 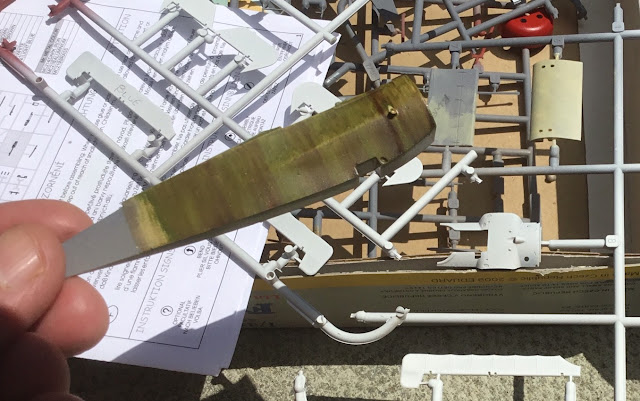 Parts primed and experimenting with the streaky Fokker finish using oil paints. A certain amount of painting and decaling can be carried out before construction starts...below, simulating a rib tape effect with thin strips of tape and a quick squirt of Tamiya smoke.. 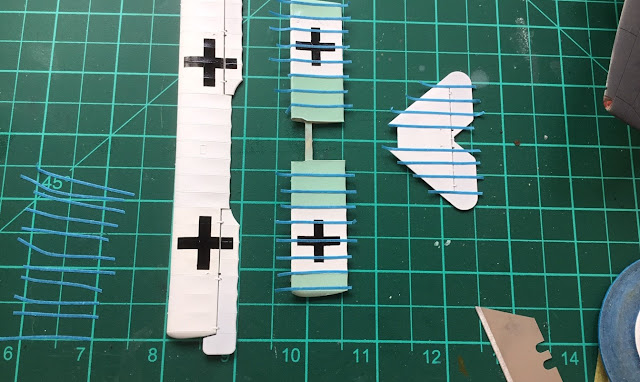 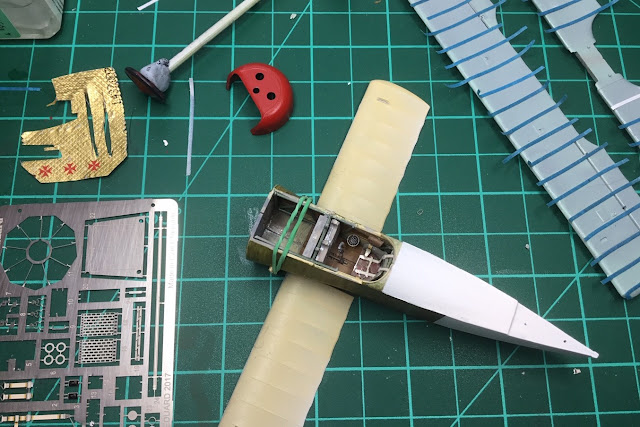 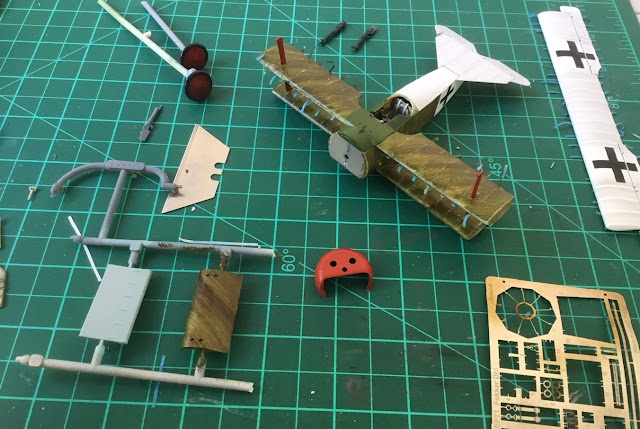 This is where the build is at currently. The very neat etch Spandaus await installation and, bottom, mounted in the cockpit. The wings are painted for assembly, apertures drilled out to accept some minimal rigging using EZ-line. In the colours of Ltn Hans Weiss 18-victory ace with Jasta 11. 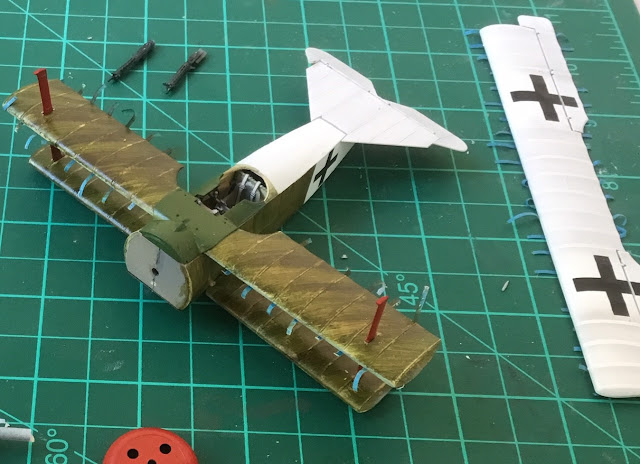 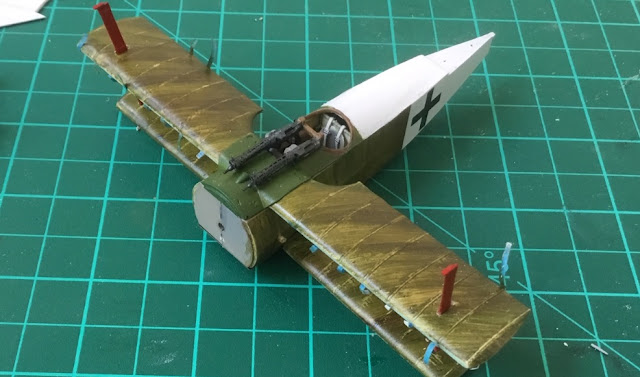 Posted by FalkeEins at 17:46 No comments: 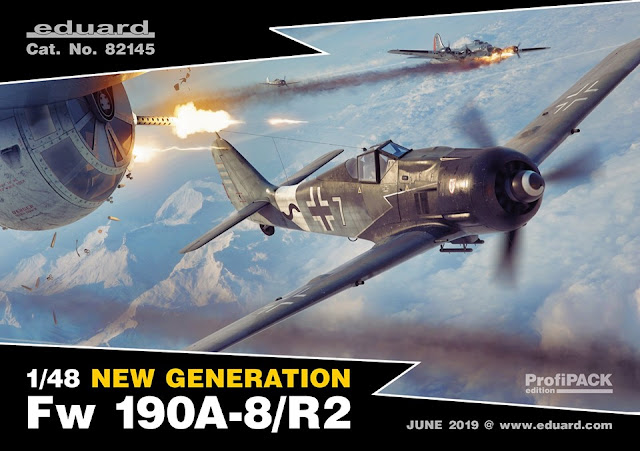 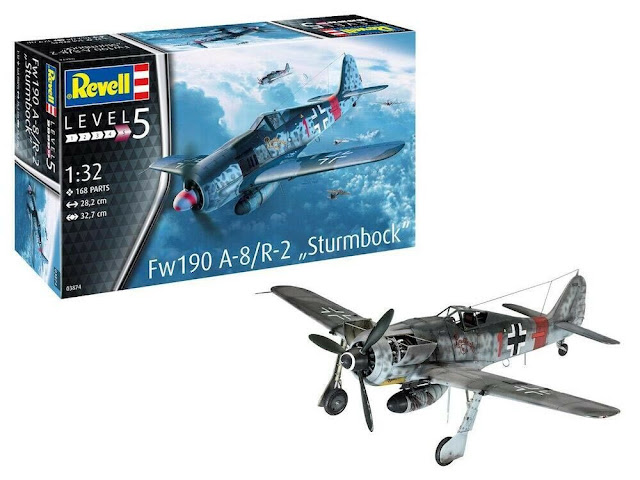 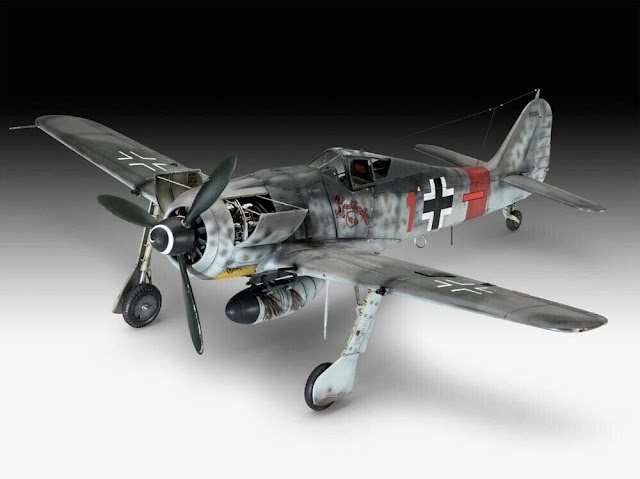 Posted by FalkeEins at 11:56 No comments: