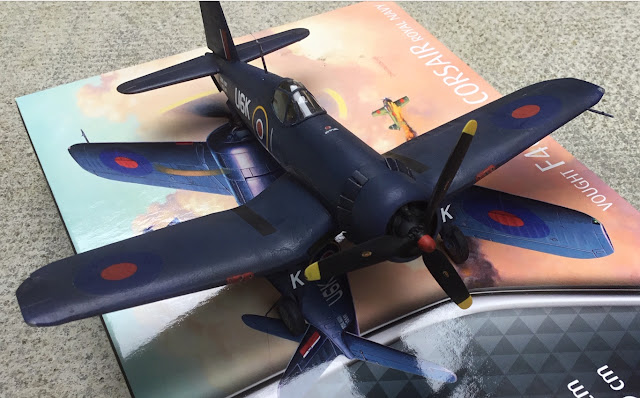 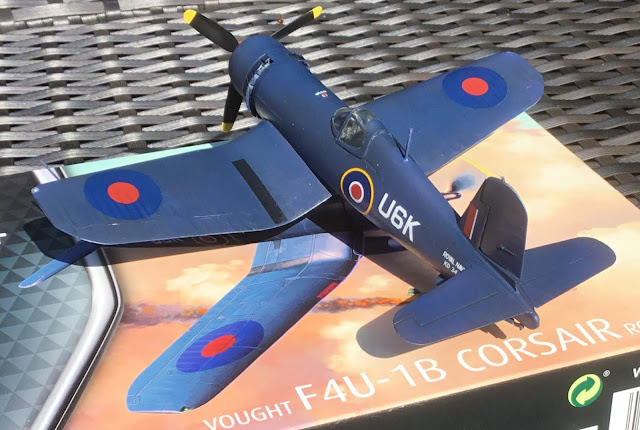 Revell's 'Royal Navy' boxing of their 72nd F4U Corsair - 'difficulty level' 4 out of 5 for a 72nd scale fighter?  Well, that would be the nine-part wing and  the five-part cowl I guess. Difficult to get everything lined up neatly but with a bit of care it all goes together well enough. And at least the horrible white plastic of the first release has gone..

Love this machine and it looks great in 'Navy' roundels..and after all the Royal Navy was flying them off carriers first .. 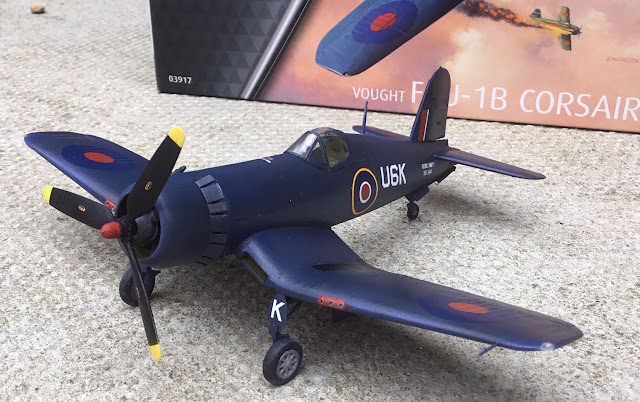 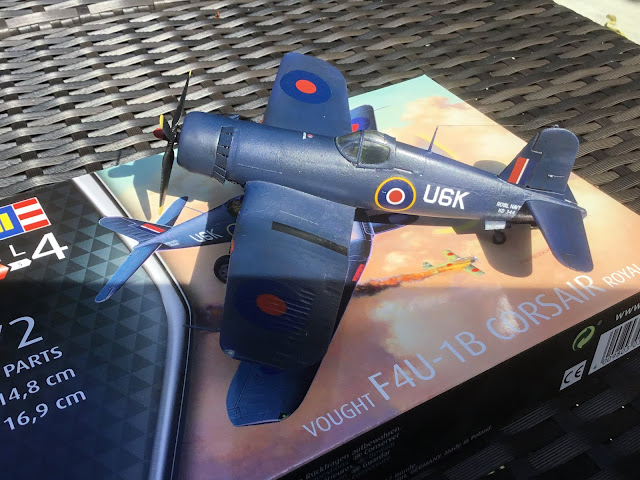 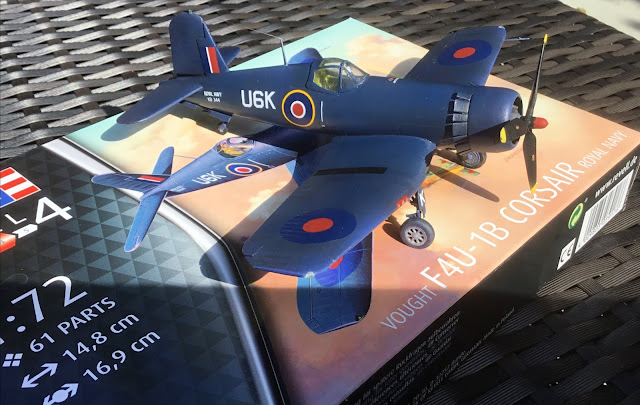 The kit markings are an interesting choice on Revell’s part. They were presumably accurate at one point but despite the Zero falling away in flames on the box art, HMS Colossus never saw combat with the  British Pacific Fleet.. Those standard European theatre markings were on the ships aircraft when she left Glasgow , bound for Ceylon and ultimately Australia. BPF markings were applied either en route or in Australia. By the time Colossus left Australia on her first war cruise, hostilities had ended.

Below; a few views of Corsair KD 431 in the Fleet Air Arm museum, Yeovilton in its original glossy midnight blue albeit very scratched finish..see " Corsair KD 431 - the time capsule fighter " by David Morris for the story of this machine's restoration. 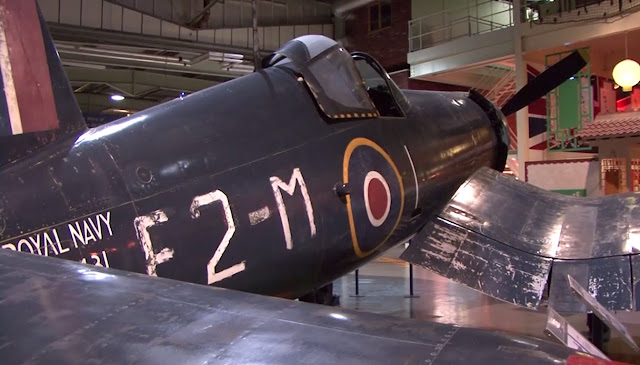 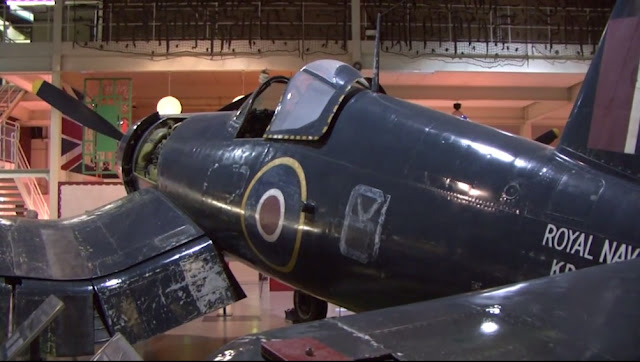 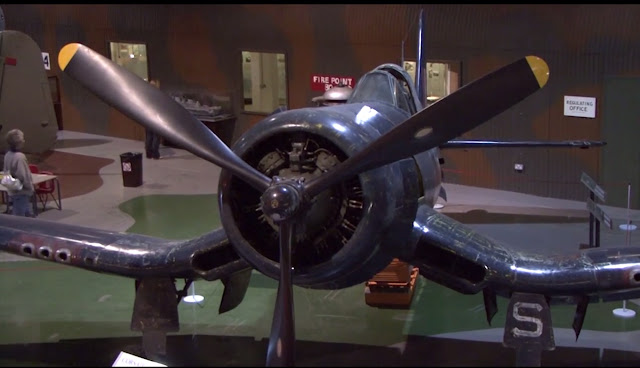 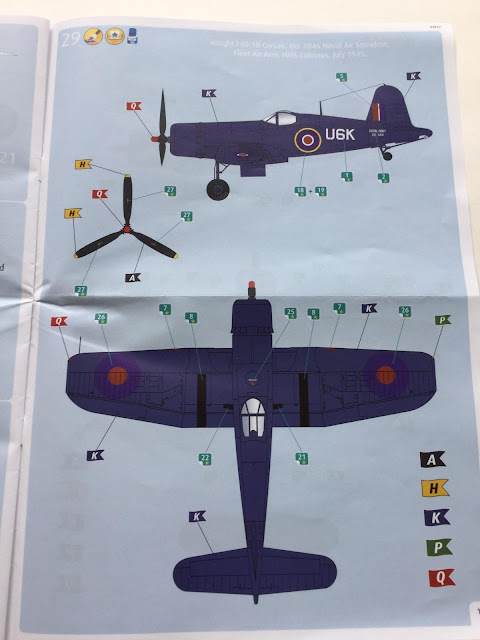 The subject of the Revell kit is KD 344, one of the final batch of 857 Goodyear built Corsairs, called the FG-1 Corsair IV in Fleet Air Arm use. It was delivered to the Fleet Air Arm and was embarked on board HMS Colossus after she completed her sea trials and sailed for Ceylon (Sri Lanka) on 12 March 1945.

On 8th July 1945 KD 344 is reported as ending up in the barriers with Sub-Lt J.D. Garden RNVR flying when the hook jumped the arrestor wire. The Corsairs and Barracudas were offloaded on 17th January 1946 to Royal Naval Air Station Wingfield near Capetown, they were re-embarked in April. In July of the same year the Colossus was transferred on a 5 year loan to the French Navy as the Arromanches, which later became a permanent transfer. 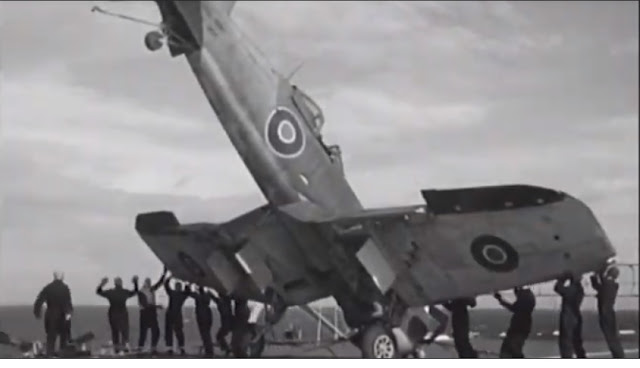 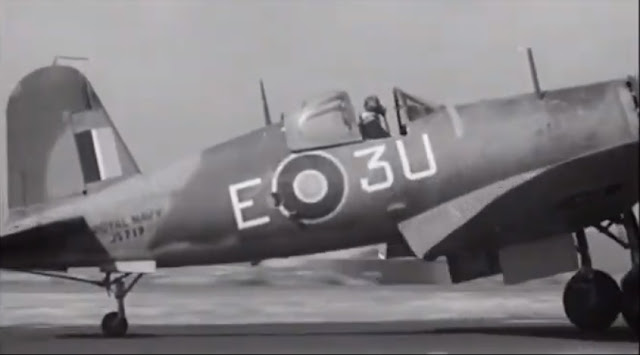 Senior Pilot of 1846 Sqn. was Lt. Henry Adlam. His memoir is entitled 'On and Off the Flight Deck'  and it is a fascinating insight into the life of a naval fighter pilot. Adlam takes part in many campaigns including Salerno, Escort carrier flying and the attacks on Palembang as a Hellcat pilot. Later he becomes a batsman and joins 1846 Sqn.﻿﻿﻿﻿﻿﻿﻿﻿﻿﻿, based aboard HMS Colossus from 1945-1946. In June 1945 1846 Sqn joined the 14th Carrier Air Group to continue the fight against Japan. The Sqn. went to Australia but the war ended before the carrier and it's air group could take part in any operations. The Sqn. Corsairs were subsequently dumped at sea somewhere near Sydney. After ferrying many serviceman that had been POWs the carrier sailed for South Africa where the aircraft were temporarily based at Wingfield. It is here that many of 1846 Sqn's well known photos were taken.


Difficult to believe that this build has been on-going for one whole year!

That's one year during which I've done little or nothing...
but with temperatures hitting a record 26C for an Easter weekend here we are out in the garden again ...

Lovely kit, just a couple of 'tricky' seams. The most ‘difficult’ part of this build would appear to be the multi-part cowling; some modellers have had trouble lining up all the parts and a resin replacement at nearly £5 is/was available! I hate to think what the price of the Barracuda resin cowl part might be in £££. Another 'issue' perhaps is the lack of gun sight in the kit. However the Eduard Mk VIII, IX and XVI kits all have two gun sights and these are apparently correct for the Sea Fury. I've now got to the painting stage - apart from making my own shade of that curious 'Hawker primer' colour for gear legs and wheel wells painting should be straight forward but I'm just a little disappointed that you can't do a 'striped' example from the kit directly.. 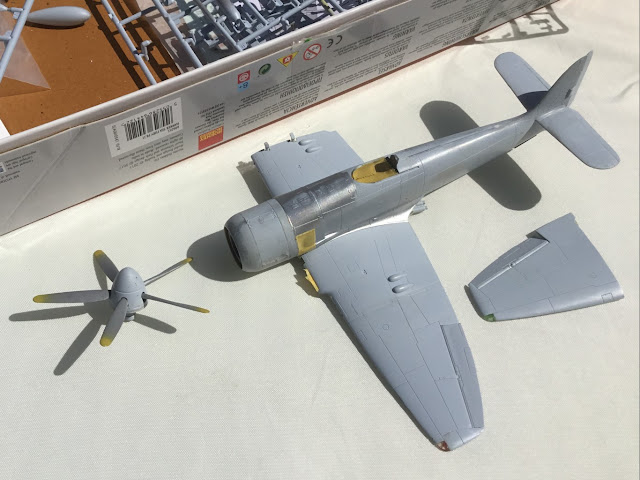 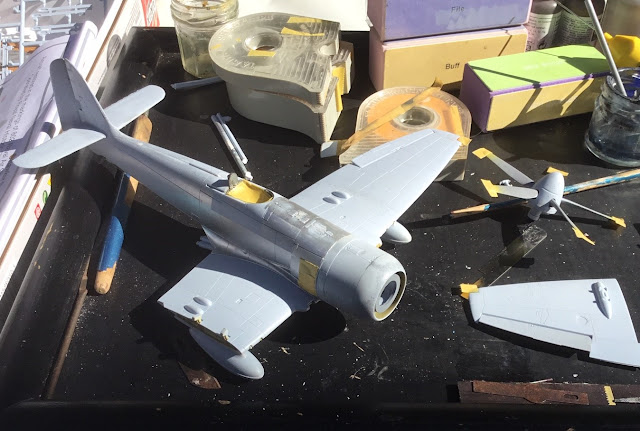 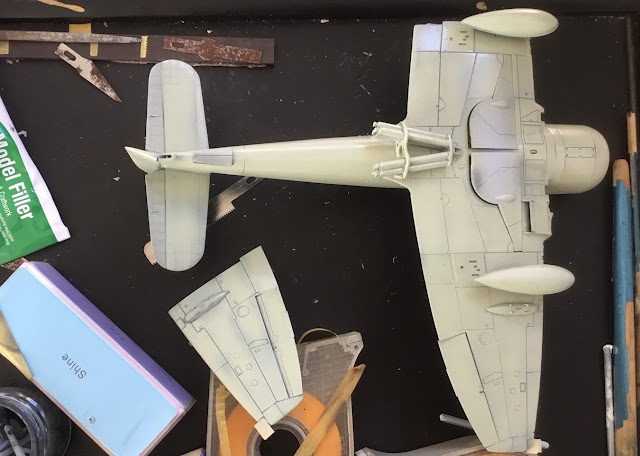 Part 1 of this build on this blog here
Posted by FalkeEins at 12:57 No comments: