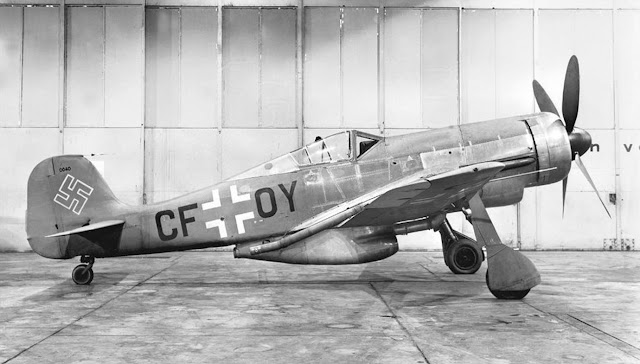 So Hobbyboss have produced an 1:18th scale Fw 190. It looks terrible, very toy-like. Not much better is this one which landed on my bench early last year. I've picked it up again recently. The Focke Wulf Fw 190 V-18 was an attempt to produce a high altitude fighter prototype using the DB 603 in-line bomber engine which featured an enormous Hirth exhaust-driven turbocharger located under the fuselage - ultimately an example of failed rather than innovative German engineering! While it could manage 400+ mph at 31,000 ft, it could only do it intermittently. The V-18/U1 was fitted with the broad Ta 152 tail-fin and the supercharged DB 603 drove a large four-bladed prop - makes for an 'exotic' looking machine and I guess we should be glad that a reasonable replica is available in kit form and not just as some short-run resin. 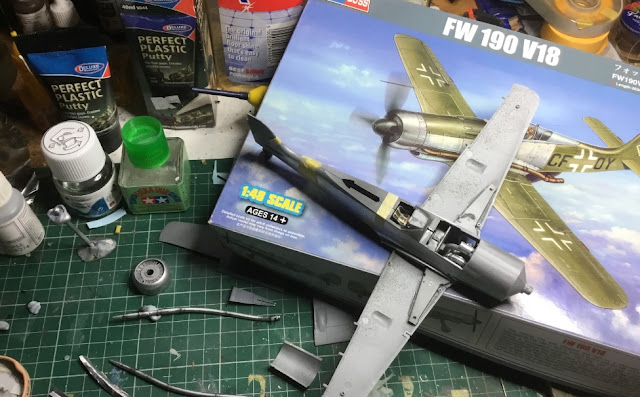 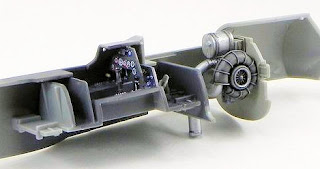 The problem with this kit is that it doesn't know which variant it really wants to be. It doesn't help that the box-art is rather more detailed than the kit itself, which lacks the Hirth turbocharger exhaust fairings on the fuselage and upper wing. There's only one or two builds of this kit out on the net. One 'John Miller' has a very nice build on a few sites. I've borrowed his pic of the cockpit (looks decidedly oversized) and supercharger engine detail alongside as I didn't take a picture of mine before hiding it away. 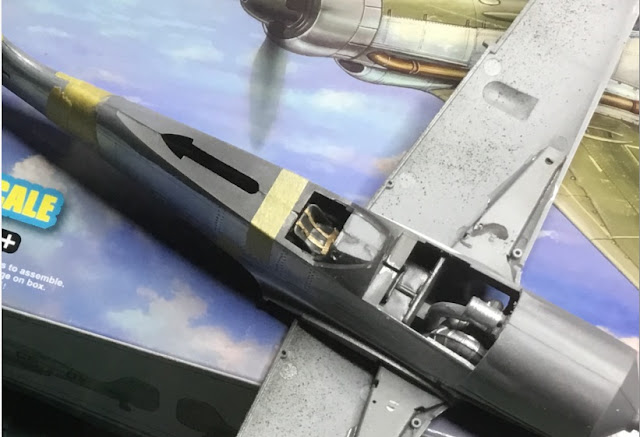 John reckons the biggest issue is the nose cowl with its two large intakes that weren't present on the V18 (easily filled in and faired over). That said I notice that the Fw 190 V15 prototype which trialed the exhaust pipes had these intakes and did not have the fairings, so perhaps the Hobbyboss kit designers got their variants mixed up. There are more curious omissions and inclusions on the kit. But there is no armoured head-rest on the real machine above, John. That was introduced later in development. One tip I've picked up from John's build is the area of heavy riveting underneath the cockpit. The exhaust-driven turbocharger unit is included but can only be seen through the rather bare and open wheel well. The large open rear cockpit decking will be covered with some Eduard etch. Still the grau/alu finish looks quite striking, just remains to be seen if it builds into a reasonable replica. 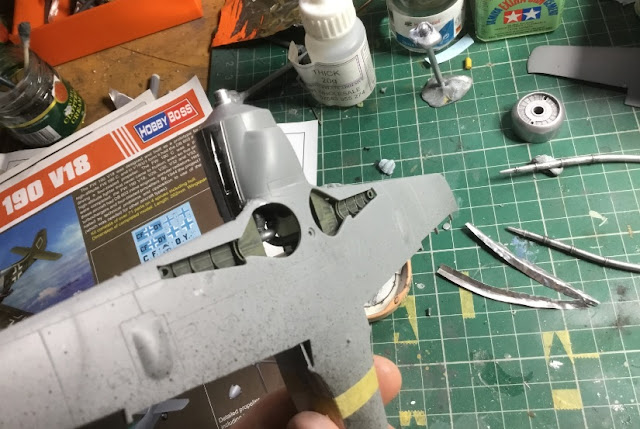 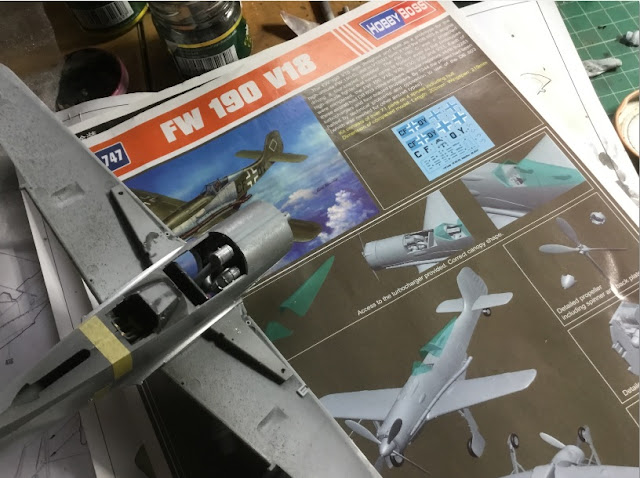 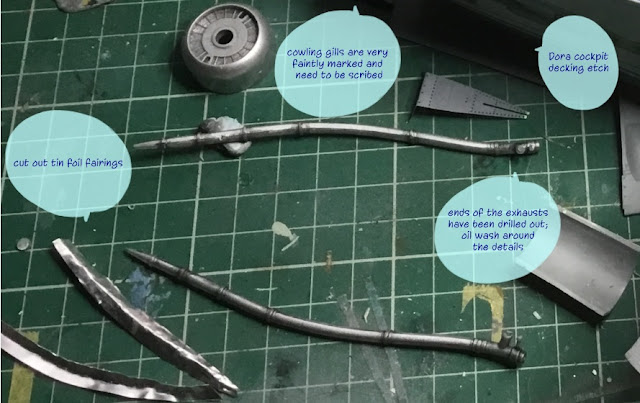 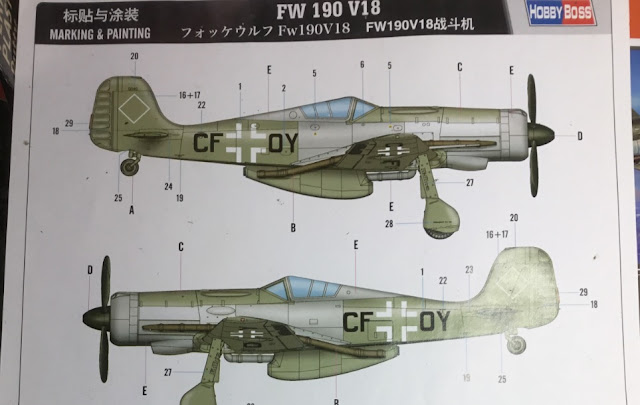 Posted by FalkeEins at 07:26 No comments: 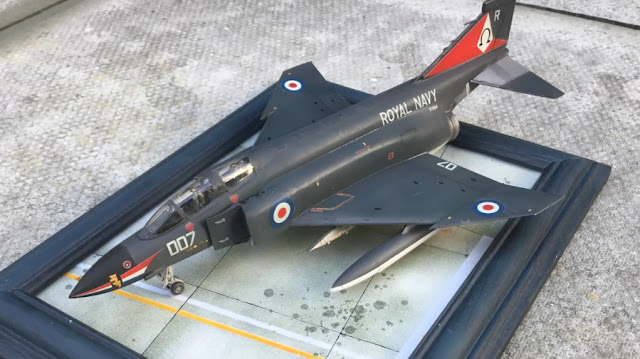 The 're-designed' and Rolls-Royce Spey-engined F-4s used by the RAF and the Royal Navy during the 1970s must count - at least as far as UK enthusiasts are concerned - as some of the most 'exotic' and 'charismatic' of all F-4 variants. The modifications necessary to fit the larger British engines imbued British Phantoms with an additional air of menace! Those cavernous intakes fed huge quantities of air into huge downwards-angled engines spewing tons of flame and thrust earthward during take-off. Difficult to believe now that we had some 150 F-4s, with one squadron of the Spey-engined aircraft flying off HMS Ark Royal for a number of years! Shame they had gone by 1982 - they'd have come in handy down in the South Atlantic!  As it was, post-Falklands, the F-4s moved south, opening a new phase of RAF F-4 operations when the powers-that-be realised we needed more of them - even if they were only second-hand Js. No wonder the Russians never gave us any grief! But that's another model. And the FGR. 2 soldiered on with 56 and 74 Squadrons until 1992 - but again, that's another model, probably a Hasegawa 48th scale F-4.

Although delayed, the new-tool Airfix  F-4 FG.1 is still eagerly awaited. Back in May I started a Fujimi FG.1 in 72nd ahead of the release of the Airfix  F-4 and this was as far as I managed to get before putting it to one side. 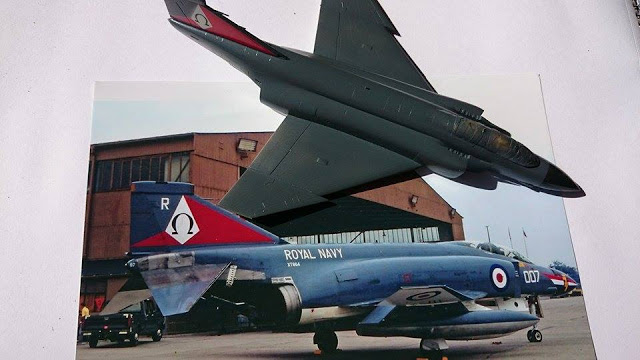 More of the build phase on this blog here.  I have now managed to complete it before the end of the year (well, not quite..) and prior to the release of the new Airfix kit. The 1977 'Silver Jubilee' scheme is also a markings option in the new kit  - as it was back in the 1980s when Fujimi released their model. See the link below for more on the differences between these various markings options. 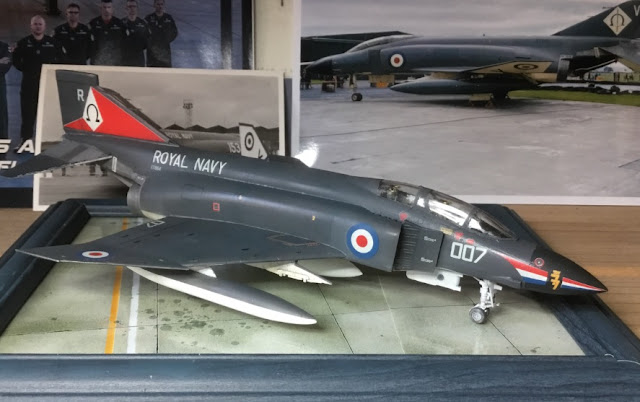 Above; my completed model and, below, a few shots of the decals and undercarriage going on. 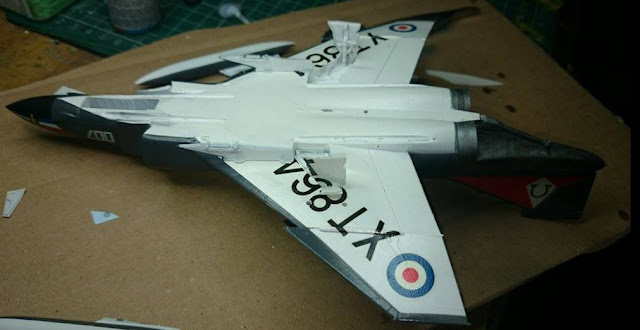 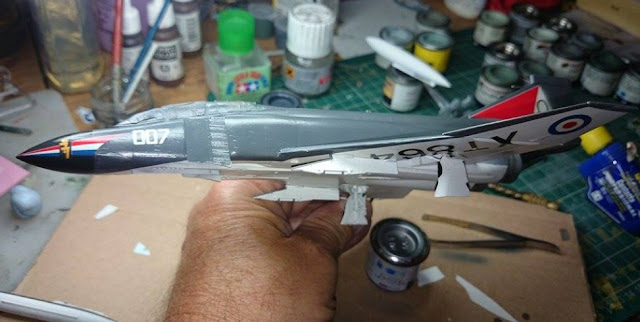 Although nicely detailed the kit is really starting to show its age now - and despite what you can read elsewhere you have to work hard to get bits to fit - the intakes especially. The decals are pretty poor too and all the stencils silvered badly. The new Airfix kit promises to blow this one out of the water but I see there are already rumblings about 'missing' details - bleed air louvres above and below the intakes most notably, which Fujimi managed to incorporate into their kit all those years ago. 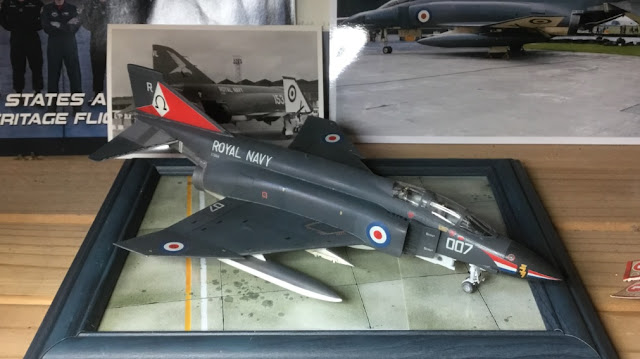 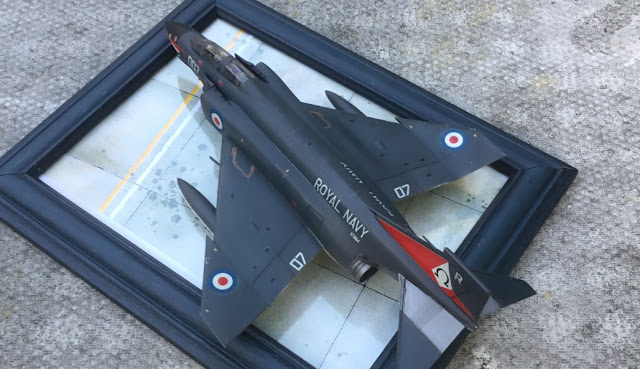 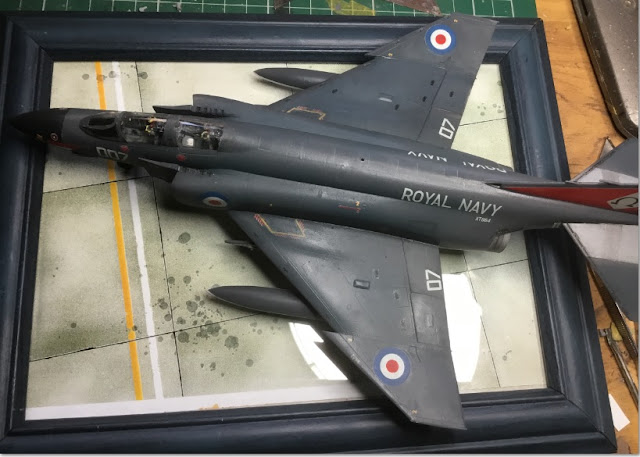 Below; some decent detail views for modellers of the new Airfix FG. 1 including a super view of the lower surfaces. XT 859 at Farnborough 1968 700 NAS with everything out for a low dirty pass. Note the underwing codes overlap the gear doors/flaps. Mark Taylor photo. 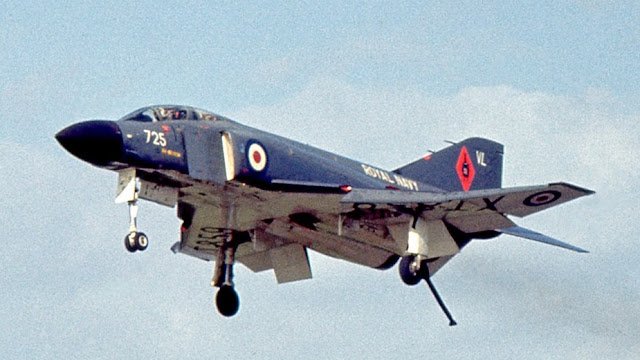 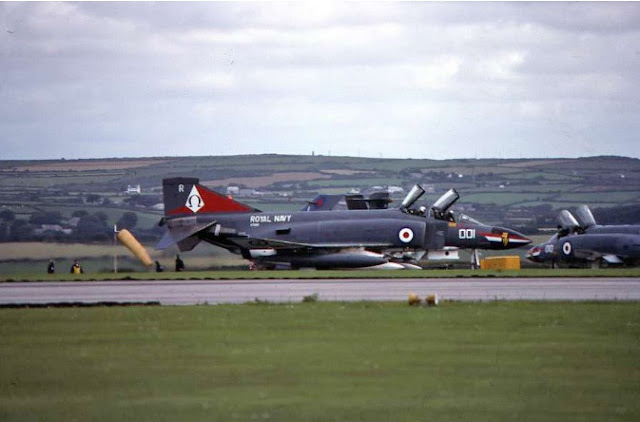 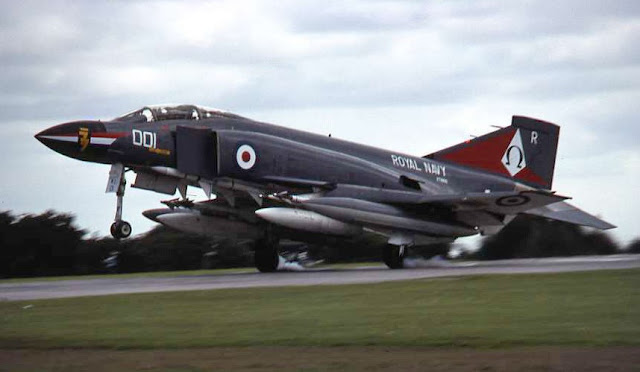 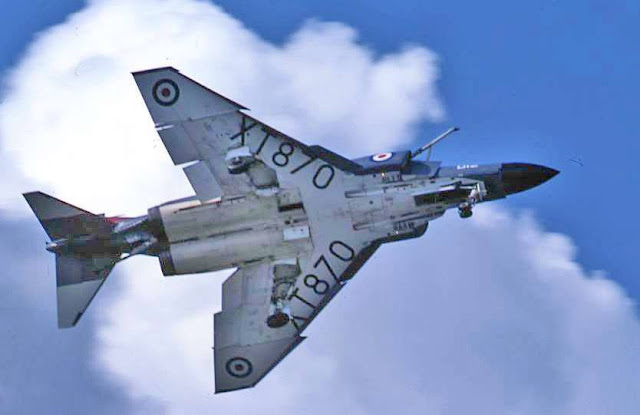 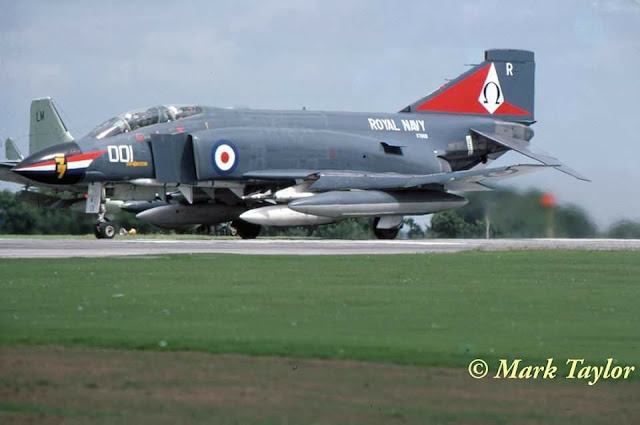 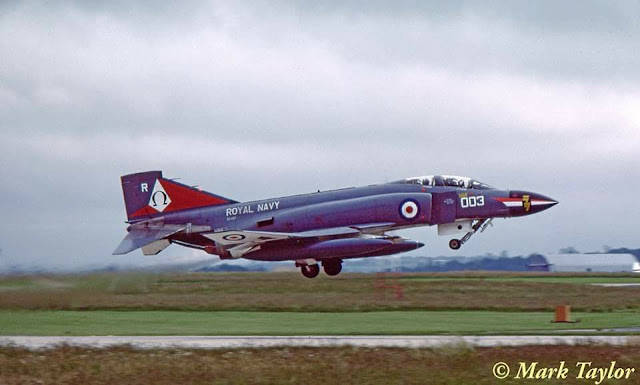 Many more pics of RN Phantoms on this blog