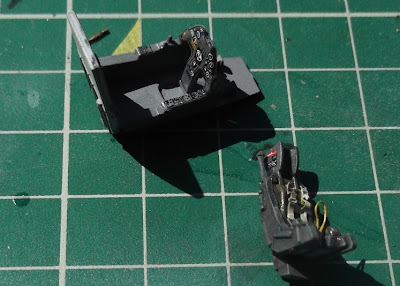 I have made a start on the new-tool Airfix Harrier GR. 1. Like most aircraft kits the first few steps are building up the cockpit, and the Harrier is no exception. The cockpit tub area is made up of 8 parts, 4 for the tub and 4 for the bang seat, there are also 6 decals for this area 4 in the tub area and 2 on the seat. I have added some harnesses from some left over brass etch. 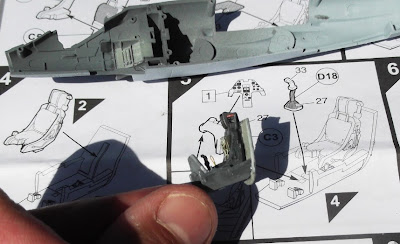 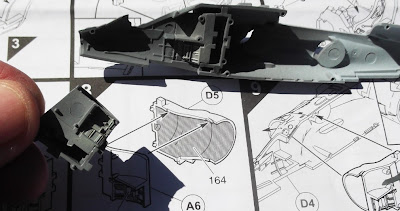 The cockpit tub and intake channels are fitted into the fuselage halves which are then brought together. My last few Airfix new tools have involved a fair bit of fettling to get the cockpit nicely seated without fouling the fuselage halves..and this one is no different. I must be doing something wrong. I wasted some time by painting the rear of the cockpit and the lower part of the intakes on the sprue when it would be perfectly possible to spray these areas in situ..they do in fact make up the forward undercarriage bay, which unless you are careful will have a big seam across the middle which will be difficult to fill and file.. 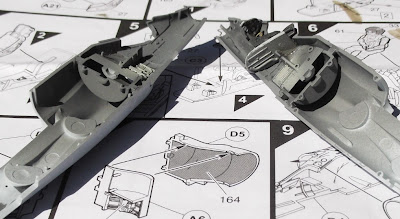 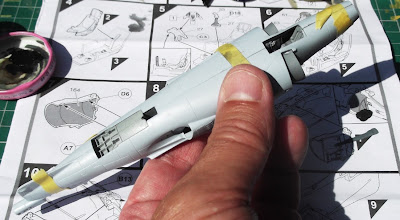 Stage 12 of the instructions indicates that one of those "bumps" on top of the fuselage should be removed. It doesn't appear to be present on the GR. 1 but is on the GR. 3 according to the pics I've been looking at, although its not on Caruana's scale drawings in McLelland's monster Harrier book from Classic. Talking of which there seems to be a relative dearth of decent reference on the GR. 1 - even in this 330-page tome..apparently according to 'Fred' on the Airfix Tribute forum this surplus 'bump' was only on later GR.3s [Snoopy nose and a few pointy nose] and it is a cooling outlet for the 12KVa AC generator. It would be the rearmost on the starboard side. The two front outlets are for the GR1 & 1A only.In addition for the GR.1 & 1A there is only one aerial behind the cockpit, on the starboard side. 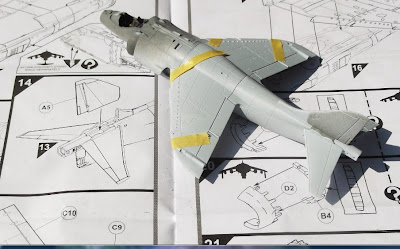 Posted by FalkeEins at 05:41 No comments:

Sprue Cutters Union - " I won't model anything with a swastika on it.."


Over on Jim Bates' blog " A scale Canadian " Jim has addressed the latest Sprue Cutter's Union question posed by Jon B of the Combat Workshop, "what will never go across your bench". I felt that Jim's answer, " Luftwaffe aircraft " deserved a response from a Luftwaffe enthusiast and modeller..

Jim, as a modeller of Bf 109s and Fw 190s I sort of agree with you on this. For example I am uneasy too about the level of  'hero-worship' shown by modellers and manufacturers in our hobby towards Luftwaffe aces such as Hartmann and Galland which I agree is rather misplaced and unwarranted (352 victories my eye!..the 'official' German claims confirmation system had broken down long before Hartmann filed his 280th claim....) Similarly the amount of fuss and brouhaha made over some newly kitted Luftwaffe aircraft types - the Me 262 and of course the latest Bf 109 springs to mind - is often I feel inappropriate. The fuss heralding the new Zoukei Moura Heinkel He 219 is typical of this sort of unhealthy fan-worship - the He 219 was a relatively inauspicious type, constructed in low numbers with only a handful of combat feats to its name, yet it is unfailingly and unceasingly built up as some sort of charismatic, even 'sexy' aircraft. I don't for the life of me know why. Ditto for the Tiger tank - he says, cautiously eyeing his header photo. A great big slab-sided monster that invariably had to be scuppered by its crews as they couldn't move it when it broke down - which was often. Nearly all the 120 Tigers deployed in Normandy for example were lost within eight weeks of the D-Day landings. Of course in many instances some of the fuss that we modellers make over these subjects is reserved for the sheer quality of the kit itself - as modellers we can simply admire and appreciate a super new tool for the technology involved in producing it and the finesse and incredible detail of the parts.  On a wider level we may even recognise the quality of the technology the Germans developed in 1944-45; after all even if the V-2 rocket (for example) was a terrible waste of resources and lives and achieved next to nothing (did man really go to the moon?) many of us still drive BMWs today and Volkswagen is one of the world's leading vehicle manufacturers. Of course war drives technological change and advancement. One point never to be forgotten though - German industrial prowess during the war years owes everything to the massive deployment of foreign and slave labour in appalling conditions -between 1942 and 1944 over 650,000 Frenchmen alone went to work in German factories. Despite this however many German pilots and crews were completely apolitical- some brave souls even removed the Hakenkreuz from their aircraft- and certainly all Germans were not Nazis and many had deep misgivings about the regime. Possibly none of the leading Luftwaffe aces such as Hartmann and Galland were Nazis either - after all men such as these were instrumental in re-launching the Bundesluftwaffe in the 1950s as a bulwark against Soviet Communism. Nor can you deny the place of some German aircraft types in history as you briefly concede; 33,000 examples of the Bf 109 constructed makes it an important type whoever deployed it. As a modeller what I try not to do is portray Spitfires and P-51s with swastikas on them (captured examples); that does appear to me to be purely gratuitous. To respond to your point about 'non-modellers' looking askance at us Luftwaffe modellers I can simply point to the huge efforts deployed here in the UK recently to raise the last surviving Dornier Do 17 bomber from the waters of the English Channel, where we put it over 70 years ago during the Battle of Britain! The editorial in the current edition of the German aircraft magazine "Flugzeug Classic" even thanks the British for doing this and argues that gestures like this towards former enemies serve to advance the cause of peace. My feeling is that while there is of course generally speaking huge antipathy towards the swastika and all it stands for, the machines themselves even though developed under that evil regime can still largely be appreciated..and modelled..
Posted by FalkeEins at 02:48 8 comments: