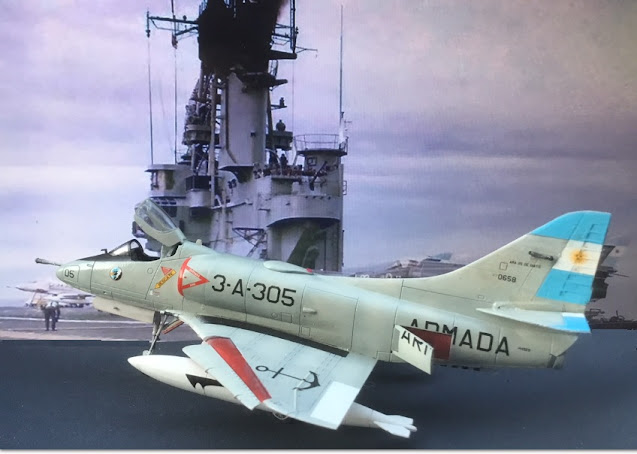 3 Escuadrilla Skyhawk embarked aboard the Argentine carrier 25 de Mayo (ex-WWII Royal Navy carrier HMS Venerable) during April/May 1982. The A-4Q's most 'successful' sortie during the Falklands war took place on May 21, 1982 when three machines led by Capitan de Corbeta Philippi delivered the coup de grace to the damaged frigate HMS Ardent. All three Skyhawks were shot down by 800 NAS Harriers..
The Airfix kit is very nice, although the nose shape only looks 'right' from certain angles. Note the incorrect size of the AN/ARC 109 antenna behind the cockpit. The kit does not feature the VOR antenna on the vertical tail. Very impressed with the large decal sheet - the decals worked superbly. . 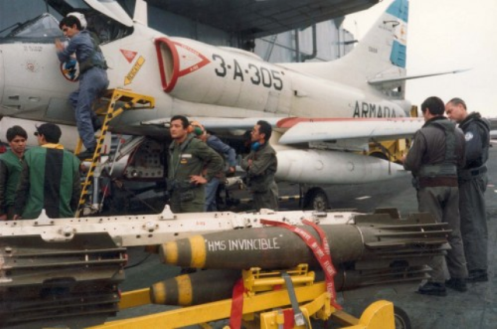 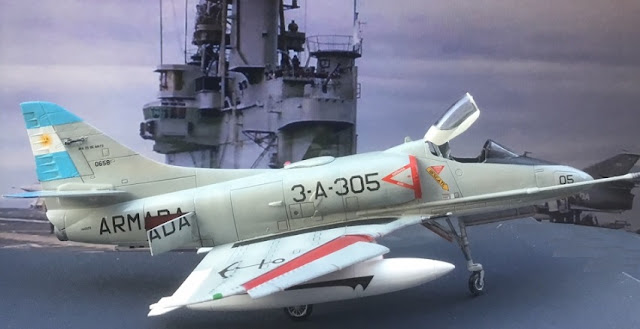 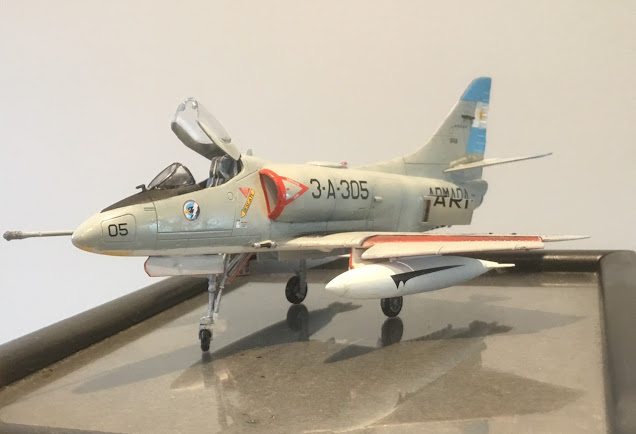 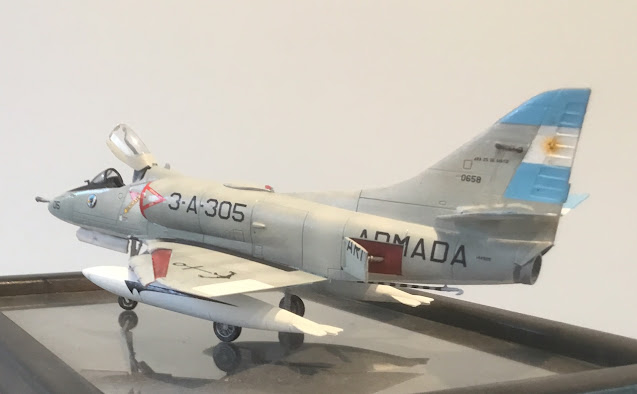 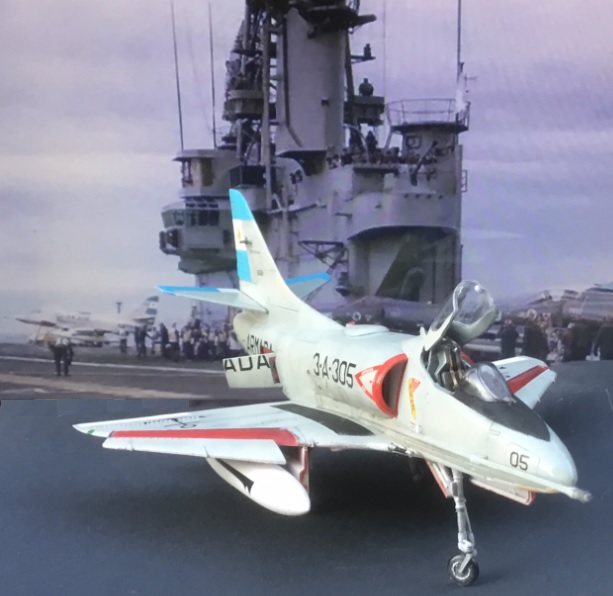 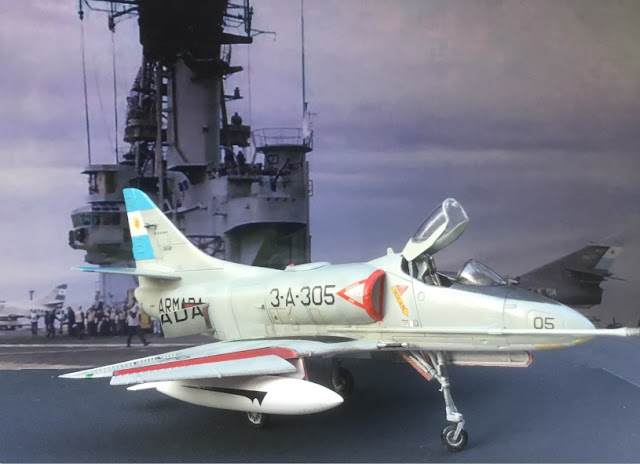 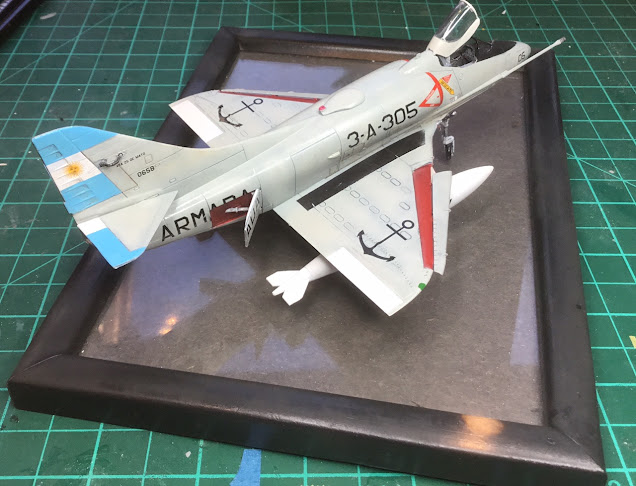 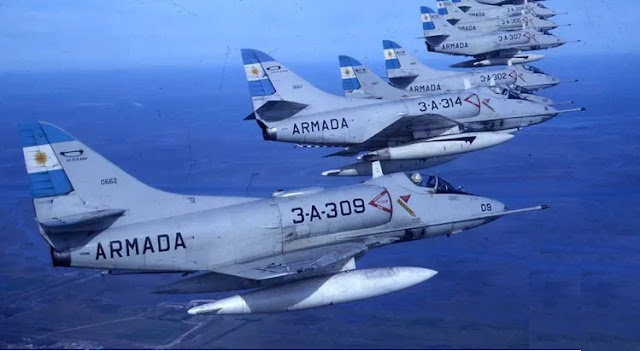 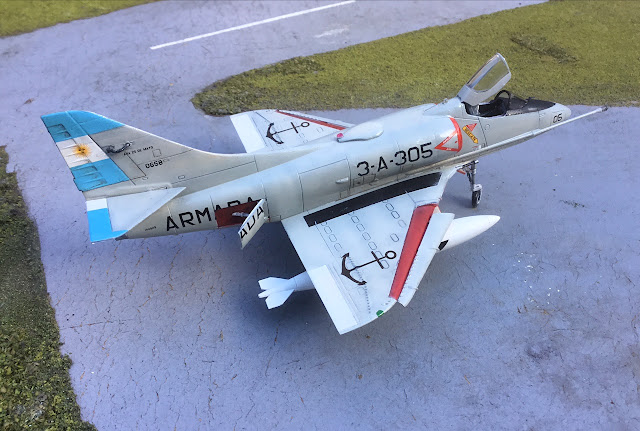 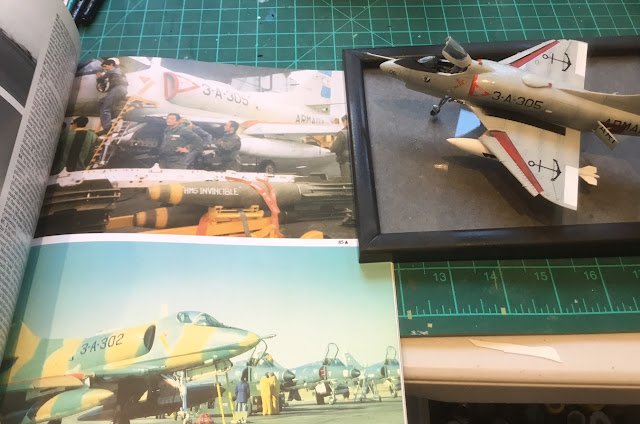 Posted by FalkeEins at 09:55 No comments: 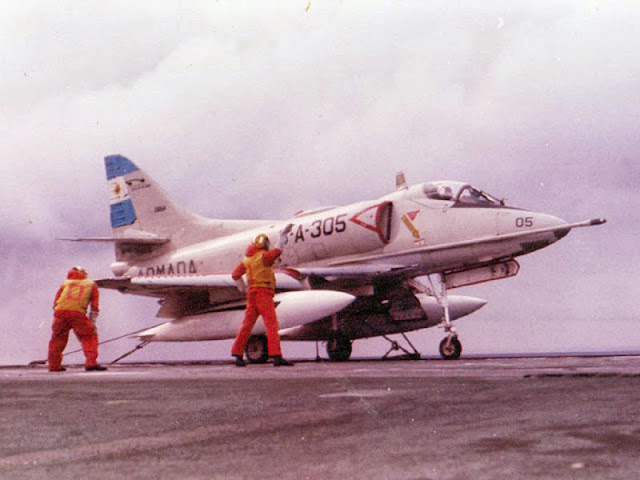 
On May 21, 1982 two groups of A-4Q “Skyhawk II” bombers from 3a Escuadrilla Aeronaval took off from Rio Grande Naval Air Base. Their target was the British “Type 21” frigate HMS ARDENT, located 2 miles north of the West Island in the Falklands. The first section of Skyhawks comprised 3-A-307 (Capitan de Corbeta Alberto Jorge Philippi), 3-A-312 (Teniente de Navío José César Arca), and 3-A-314 (Teniente de Fragata Gustavo Marcelo Márquez). The second section was made up of 3-A-301 (Teniente de Navio Benito Rótolo), 3-A-305 (Teniente de Navio Carlos Lecour) and 3-A-306 (Teniente de Navio Roberto Sylvester). The A-4s approached the target below 50 feet altitude before climbing to 300 feet to drop their weapons. The attack was launched at 14:50 local time. At 15:01 the 1st Section attacked the frigate dropping their 227 kgs Mk.82 “Snake-eye” bombs while at 15:05 the three Argentine aicraft were intercepted by Sea Harriers from 800 Squadron: 3-A-314 and 3-A-307 were shot down and 3-A-312 was critically damaged. At 15:30 the 2nd Section unloaded their bombs, evaded the British defences and were able to land at Rio Grande NAS. Three A-4s were destroyed in the action while the British frigate HMS Ardent was mortally damaged. 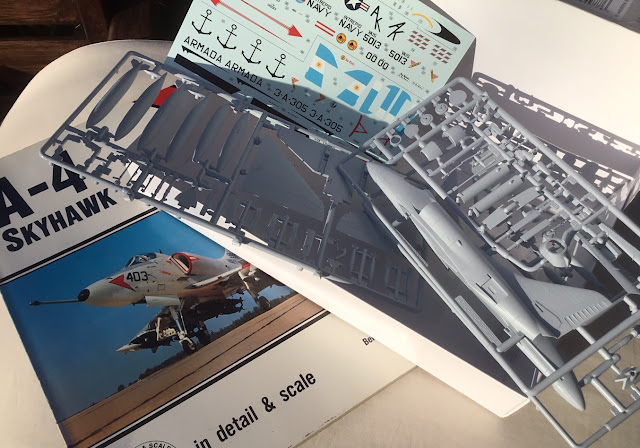 ..I was watching Chad over at Flying S Models on youtube put together this (relatively new) Airfix kit and very nice the completed model was too! Then I spotted the detailed posts by Neil 'FAAMAN' over on the Airfix Tribute forum. It appears that Airfix missed a whole host of hatches and latches on the kit and perpetrated an assortment of other errors including - according to Neil - an incorrect nose shape, wrong tail height, incorrect rudder etc. Much more at the link at the bottom of the page...
A shame. If I'm honest though I don't think a lot of Neil's 'corrections' are really going to have much impact in 72nd scale - especially in my case as I'd already started the kit. It will still serve its purpose as a 'mojo' restorer.
I often read when debates about a kit’s accuracy crop up on forums, that ‘it costs just  as much for a manufacturer to get a kit right as it does wrong’ which to me is an entirely specious argument. A model is just a ‘replica’ after all - its not an exact carbon copy. There are the obvious limitations in the molding process and in the smaller scale especially, less is sometimes more. Those ‘missing’ hatches and hinges would add little to the ‘conviction’ of a well-finished model. I'm of the opinion that Airfix’s new-tool Skyhawks look to be little gems and they have duly appeared in a number of different boxings.. 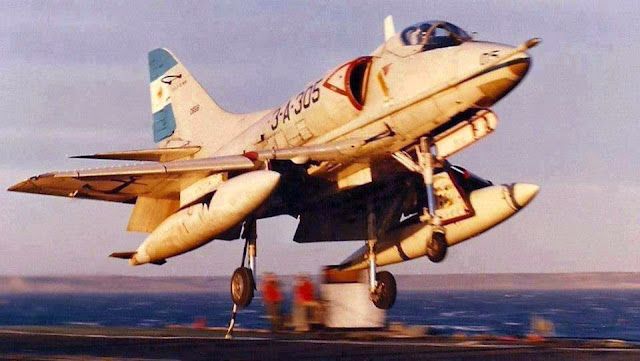 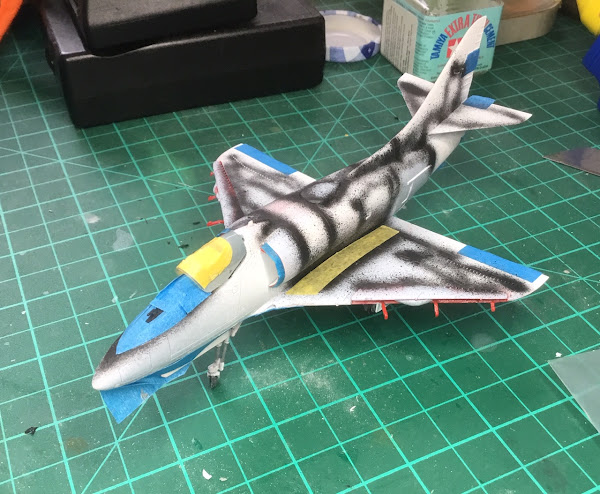 Here I've re-positioned the 'steerable' nose wheel, deflected the all-moving tail-plane which is often seen pointed downwards when the aircraft is parked up, re-shaped the rather inaccurate dorsal fairing, added the fin ring aerials and detailed the cockpit with some wire and sprue odds n' ends. 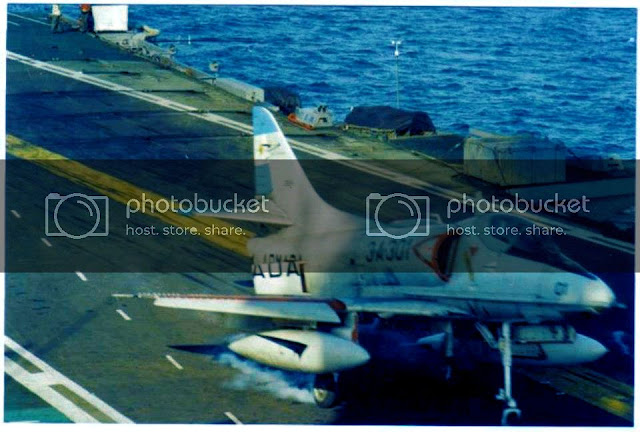 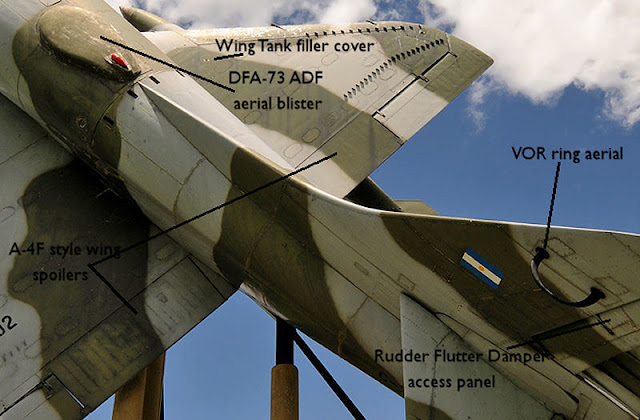 Above; a good view of the the radome for the Bendix DFA-73 ADF aerial used on Argentine Skyhawks.

See the following link for much more detail on Argentinian Skyhawks..
https://www.tapatalk.com/groups/airfixtributeforum/airfix-1-72-douglas-a4b-4p-skyhawk-a03029-t47356.html
Posted by FalkeEins at 11:56 2 comments: