Revell/Matchbox Wellington Mk. X 1:72 - back to the brushes! 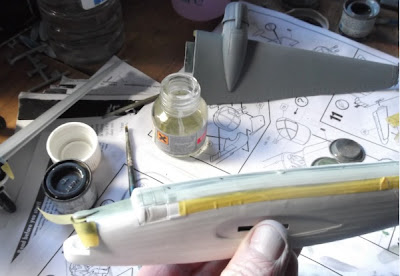 Having marveled at Diego Quijano's latest amazing creation, back to rather more mundane modelling matters - my build of the ancient Revell (ex-Matchbox) Wellington. I'm putting this together as a 'quick'  OOB build, but its been a while since I've had to work this hard on a kit and I'm wondering whether my 'skill' level is up to doing this one justice.  Progress has been slow and painful - poor fit and airbrush problems! Having replaced my broken nozzle I have been unable to get my airbrush to spray as nicely since I snapped the nozzle in the first place to the point that I have ended up brush painting this one ...a thin enamel coat or two with a wide flat brush over a primer undercoat, its been a while since I finished a model like this but I quite enjoyed it. I used a spray can for the wheels/props/armament. Goes without saying that white is a very hard colour to paint... and photograph.. As for my airbrush troubles, what a pain. I've always used a very cheap set-up (Badger 200, Premi-Air G 35, some Chinese copy, cheap Iwata compressor) on the basis that it keeps things 'uncomplicated' and up to now that philosophy has never given any problems. But all of a sudden I've got three brushes in bits on the bench and no idea what to do next frankly - aside from invest in a new Iwata Eclipse or some such. Will see how I feel when the 'On Track' show comes around at the end of February. Meanwhile nozzle, needle, seals have all been replaced and I'm still getting far too much splatter and the nozzle (0.30) clogging after a minute or so spraying on the G 35 - which up to now has always worked well for me.  I know the paint is not the problem- highly thinned enamels go through one brush, acrylics through another! Anyway the point is, that I've done anything at all recently is down to brush painting. Brush painting too has stirred all sorts of long-forgotten memories; from finishing a Frog Blackburn Shark to my first Airfix Dogfight Double aged 11 and knocking out a 1:24 Harrier in a matter of weeks aged 13 - all brush painted!  Of course some of the best modellers out there use brushes - not perhaps technically the best, but as people, certainly among the best! You can see why  too. Brush-painting is very therapeutic for one thing. You do of course lose all pretensions to becoming a modelling 'deity' knowing that most modellers out there will look rather disdainfully at your work ..but if you've got the paint at least you can get some modelling done! 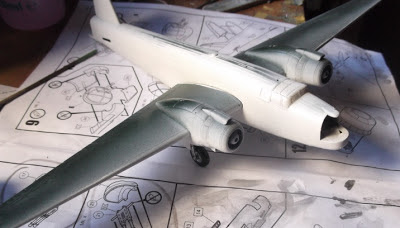