Decided to give Revell's new and re-vamped 1:32 Spitfire a go. Here is the box and some sprue shots of the new IXc. Bought two - the first one just £19 at the RAF Manston history museum shop. Got the second kit when I saw the nice decal options including the overall silver UF-Q of 601 Sqd. Pre-ordered via my local 'not-quite-a-model-shop' his eventual RRP was £29. So much for supporting the LHS. See photos below. 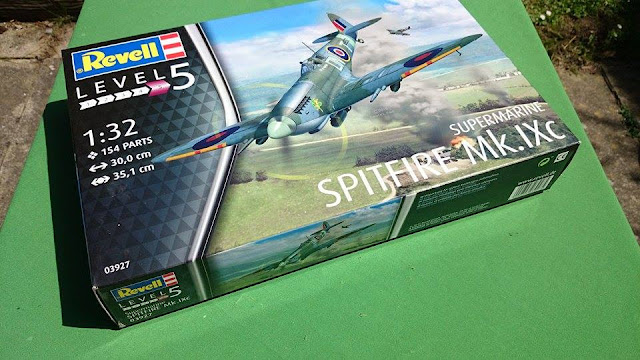 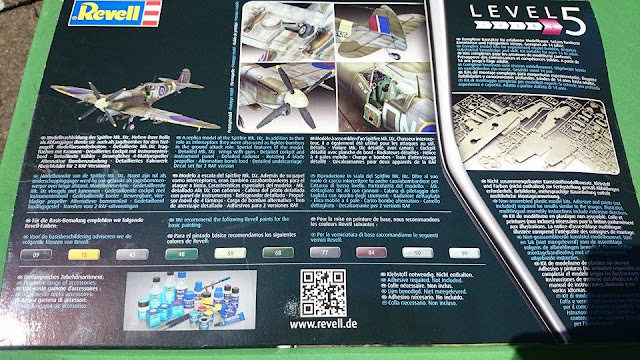 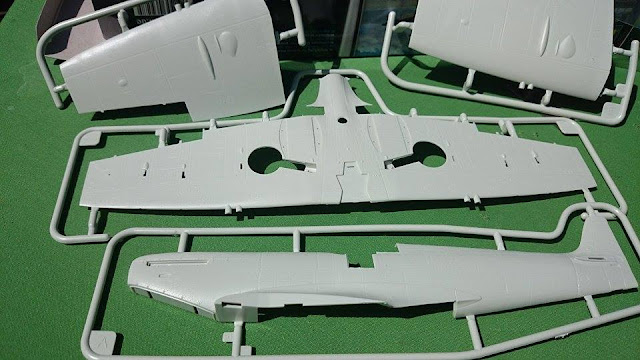 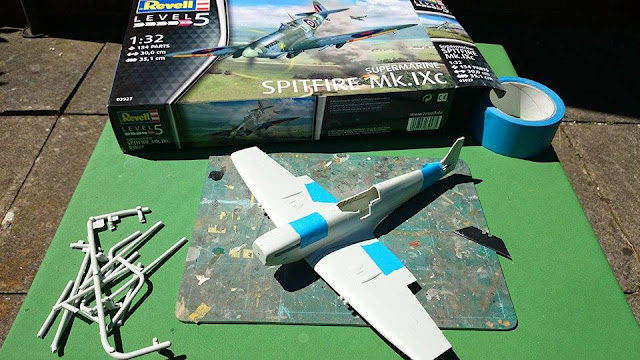 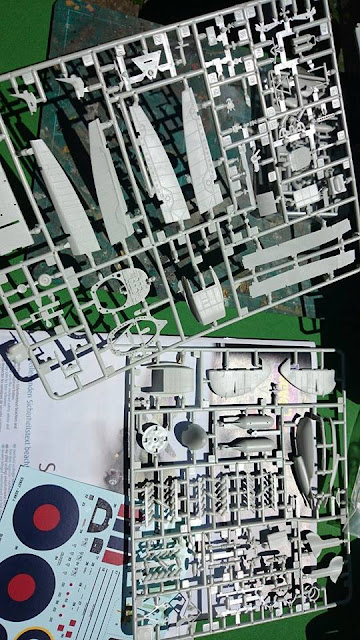 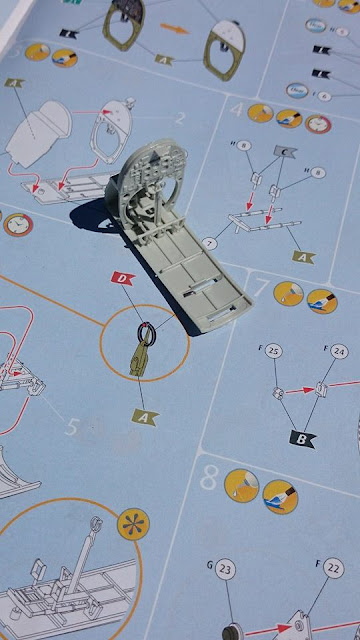 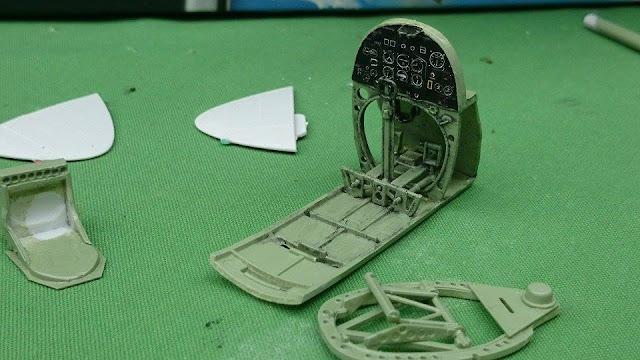 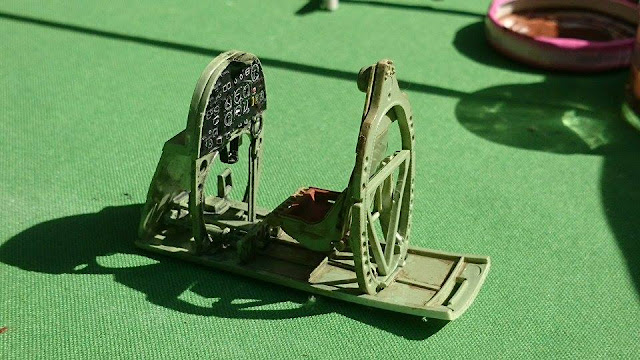 And some progress on the cockpit after a few hours work in the garden. I've read some pretty scathing reviews of this kit - but there's no pleasing some people is there? For the RRP you do get a lot of plastic for your money, even if the cockpit is missing a few items (eg the seat back armour) and there are no seat-belts, not even as decals. But there are rivets. Lots of them. Below; picture from Der Lingener's build review on britmodeller.

To answer a query I had on the IX seat colour (the Revell instructions suggest interior green) I found this on the Spitfire site forum , ".. in Paul Monforton's Spitfire Mk IX/XVI Engineered, photos of all Spitfires IX/XVI presented in the book - restored as well as preserved in original condition - show that the same red-brown plastic seat as was used as on the earlier Spitfire models. It was produced from an early composite plastic called SRBP - Synthetic Resin-Bonded Paper and was left unpainted. The seat backing though had a leather cushion, colored dark brown on the only shown preserved seat which had this feature left in (worn but) original condition..". 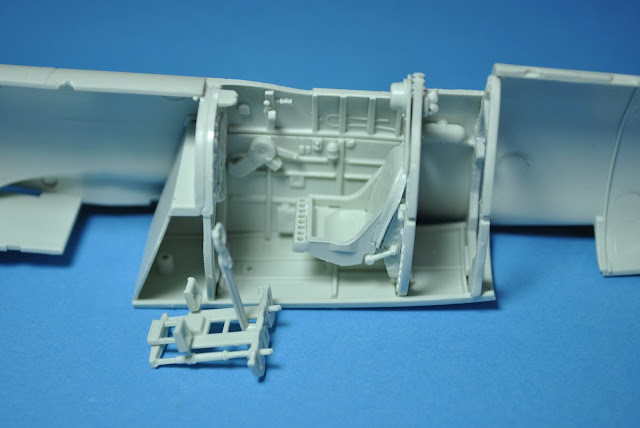 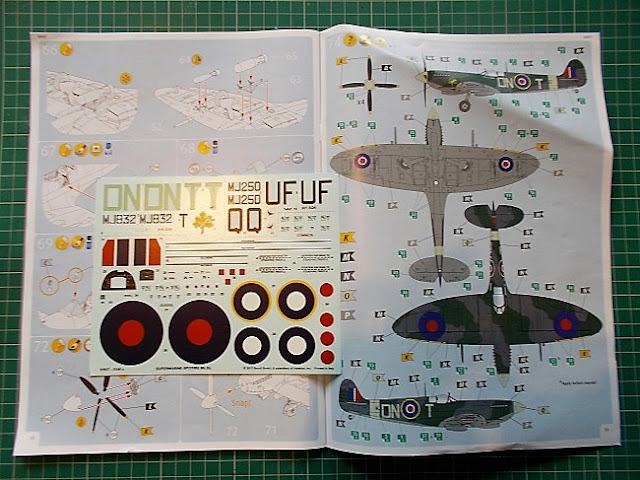 Below;  the other kit decal option, UF-Q MJ250 in natural metal finish, 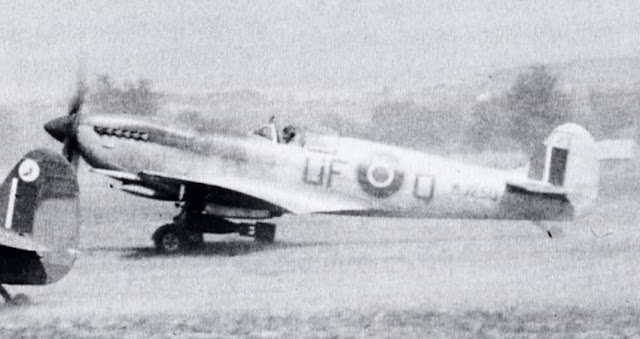 UF-Q MJ250 in natural metal finish, only the fabric areas were painted silver. The armour cover over the fuselage fuel tank is darker in colour.  In the foreground is MJ 532 in Day Fighter finish with the Sky band over painted apart from behind the serial number.

It appears that 601 Squadron were the only operators of MJ 250. During the summer of 1944 MJ 250 was flown by two Polish pilots attached to 610 Squadron from 318 (Polish) Squadron. F/Lt Zdzisław Uchwat bombed a road junction at Cagli on 15 July and tanks and other vehicles in the Cagli area on 17 July. F/Lt Jerzy Hamankiewicz on 3rd August bombed gun emplacements near Florence and escorted 12 Marauders bombing a bridge north of Ferrara on 14 August.


".....First instinct on seeing that picture and it's never changed despite claims that its a camo upper cowling. It's stripped bare metal and the engine exhaust, weathering has caused the look of the slightly darker cowling. Compare the cowling to the one on the machine in the foreground with the camouflaged finish.. There is no comparison ...." 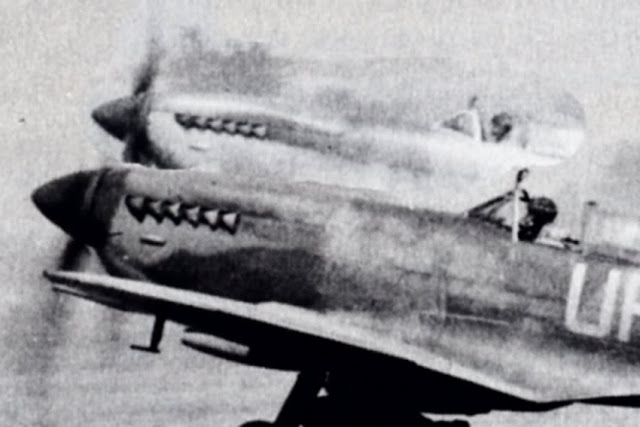