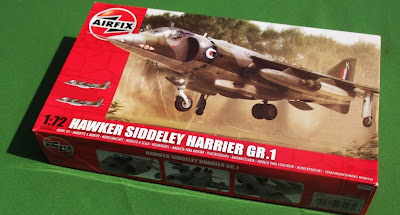 ..another new tool release from Airfix, this one again looks very nice in the box and the major parts assemble neatly without recourse to glue or tape, so I'm hopeful that this might be a more straight-forward build than some of the recent Airfix new tools.. 89 parts including the canopy in two sections, assembly instructions comprise 45 stages with in-flight or ground poses possible, with appropriate vents, stabilisers and air brake options..

I did see some forum carping about the price of this kit, mine was an Ebay purchase for £9.99 with free postage from Froome Model Centre. At the risk of being taken for an Airfix 'apologist' it looks pretty neat too and as far as I can tell the forum experts have had pretty meagre pickings - the holes in the tail boom need filling for a GR.1 and the strakes just forward of the outrigger legs are absent and one of the rectangular apertures visible on the forward upper wing needs a mesh cover. Personally I would have liked an AV8A decal option, AFAIK the only airframe difference is the large blade aerial on the fuselage spine ...as usual if you want to get in close to look at some of that lovely fine detail just click on the pics... 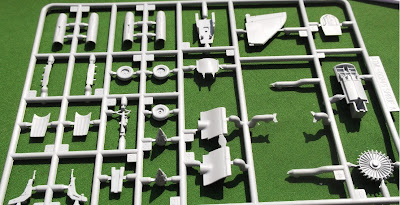 This thread looks at the visual differences between the GR. 1 and the GR. 1A